Substance vs. Appearance, Authentic vs. Inauthentic, Truth vs. Falsity

Images and Appearances matter for most people in order to have people “accept” us as we appear to be, not as we actually are. This is how our society functions with PR, spin doctors, disinformation and propaganda to have falsity accepted as actuality. These are all images, not substance. They are lies and the sacrifice of Truth to present an idol as reality (false image, something visible but without substance). False appearances mask the accurate representation of reality just as gradualism masks reality. We also have many layers or masks as part of our ego-personality-identity construct. People are so busy trying to maintain and sustain their self-images and worldview, that they do not spend time focusing on the substance of who we are choosing to be and how we live. They clean and prop-up their appearances, but not the deep quality substance of their being and doing, who they are choosing to be.

Acceptability works by comparison. We have images of appearances to uphold in society that conform to what is expected. Ex: hair length & facial hair. If you don’t look like your gender model, and have hair that other people aren’t accustomed to or normalized to, then their acceptability of you as a person may be impacted. If your look isn’t right, you may not get a job. The same with clothes, a house, a car, etc. It is about people’s personality conforming to the social engineering of accepted norms. Some people escape the clutches of false appearances and don’t put much weight on the physical appearances of people, but they are mostly oblivious to the appearances of the secondary perceptual reality of illusions and delusions through the Science of Images.

When there is more of a contrast to the norms of acceptability (by comparison), then it is less acceptable to be discussed. Normalization is a false “balance”. This is how all injustice is ignored and avoided by society. The current accepted condition is what most people remain attached to and will not let go of, fighting to preserve it, no matter how wrong it is. They only think of themselves, and the benefits they derive from the sustenance, maintenance, continuation and perpetuation of their wrong ways (that they tell themselves is right), having little to no compassion or care for other beings outside of their beneficial circle.

Related to this is the blind Faith and Trust people have in the system, in others, and in their conditioned beliefs. Uncritical, unquestioning, undoubting, full of false certainty. But, they don’t have much Faith and Trust in Truth and Morality, because they have rejected it and do not have it in them as fully as they can have it. They Trust and have Faith in man’s systems (illusions) and devices (technology) over finding the way towards the substance of living in true freedom and peace. We live in mass psychosis and delusion.

This ties into the false self of appearances: the maintenance of delusional self-images to preserve attachment to falsity while projecting the opposite illusion as if it was reality. This is ego attachment. When everyone is into the normalization of acceptability and conforming to the social image, they do not have the substance of honesty, respect, care, Truth and Morality that they pretend to have. It is mostly a facade, a pretense, pretending, posing, faking, frauds, liars, hypocrites. People lie to themselves the most to uphold their self-images of being “good” and “right”. They can’t actually become more “good”, better, to heal and improve themselves by facing their wrongs, because they are far too busy lying to themselves, upholding and defending their delusional self-image they project onto themselves, as actually being “good” and not doing any wrongs. The projections is a defensive capability of the ego-personality-identity construct that protects them like a shield/bubble. There are many psychological defensive mechanisms that insulate people from reality. 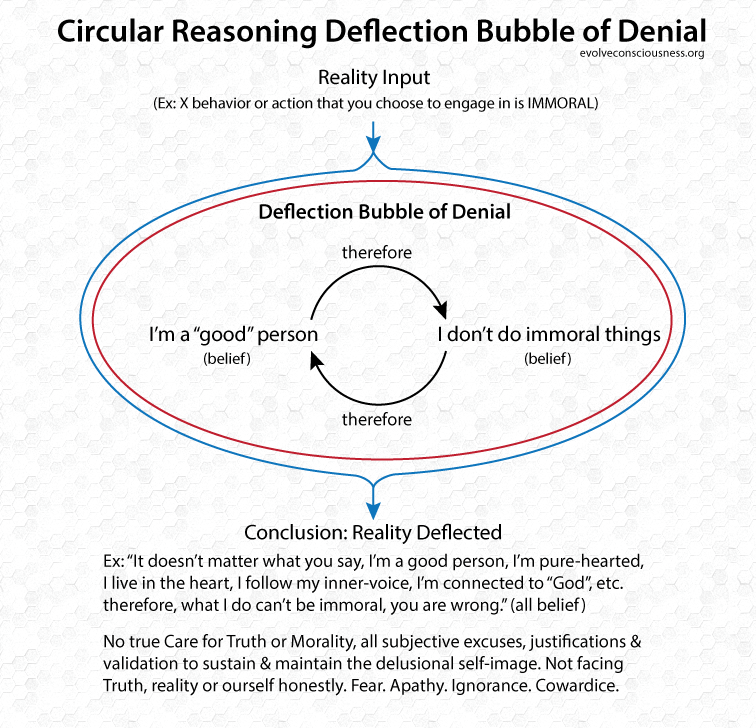 People think they are entitled to maintain their false images, not allowing people to criticize their work, information presented, their actions or thoughts expressed as writing or speech. I have covered this helpful learning about ourselves in a section of Truth is Love.

Casting aside these delusional self-images of false appearances, the real substance is to become that which is right, good and true. This is Truth, Love, Good, Right, Morality, Natural Law, True Self, Higher Self, Higher Will, etc. as I describe the aspects of this force. This is about Actualized, Realized, Authentic Living in the Substance of Truth and Morality, vs. the inauthentic conditioning into the false appearances and idolatry of man’s fictions and illusions.

Appearances fool and deceive us. Appearances infatuate us. Appearances are the subject of magic and illusions. This ties into language, words and their definitions that construct our secondary reality of perceptions. (more about this in the future)

The world is obsessed with appearances and visual affinity into bullshit. There is little to no care for meaning, purpose, depth and the substance of it all.

The world is a stage for sorcery (manipulation according to selfish will and ego), the negative form of alchemical magic (influence to align with Higher Will of Natural Law). We are presented with misdirections and distractions to keep us from the substance of our self-inflicted suffering. These diversions also keep us from the substance of our True Self, Higher Self, Higher Will, Natural Law, Morality, Right, Good, Truth, Love: the higher force that can bring us to Actualize and Realize our infinite Potential and Value to create a Heaven on Earth, and not the continued Hell we have been manifesting as far as history can show us. History is a battle between Good and evil, Truth and falsity.

In the magic of the modern day illusionists or the sorcery of our manipulated, mind controlled, duped, conned, tricked, fooled, bamboozled and hoodwinked lives, the goal is to have us looking in one place, while things are going on somewhere else. This is the principle behind  sleight of hand. Fooling people into accepting an illusory appearance, and not the actual substance that reveals reality as it is. Look here at X, not there at Y. It is to distract from looking at what is actually going on in reality, in our lives, in ourselves.

People remain inauthentic, unawakened, uninitiated, unbegun, unarisen, unactualized, unrealized and dead shadows and shells of the True Self, of the Higher Self, of the Higher Will, because they are not looking to live in reality, but instead encouraged to enjoy their pleasantries, gratifications, amusements, enjoyment, convenience, comfort, feel-good sensations, entertainment and distractions of the Pleasure Trap and false appearances of reality. All of that occupies a large portion — if not most — of our time, from birth to death. All of life, going along with the motions of conditioned programming from society, doing anything but seeking to know the hidden aspects of reality and ourselves we are encouraged to ignore. 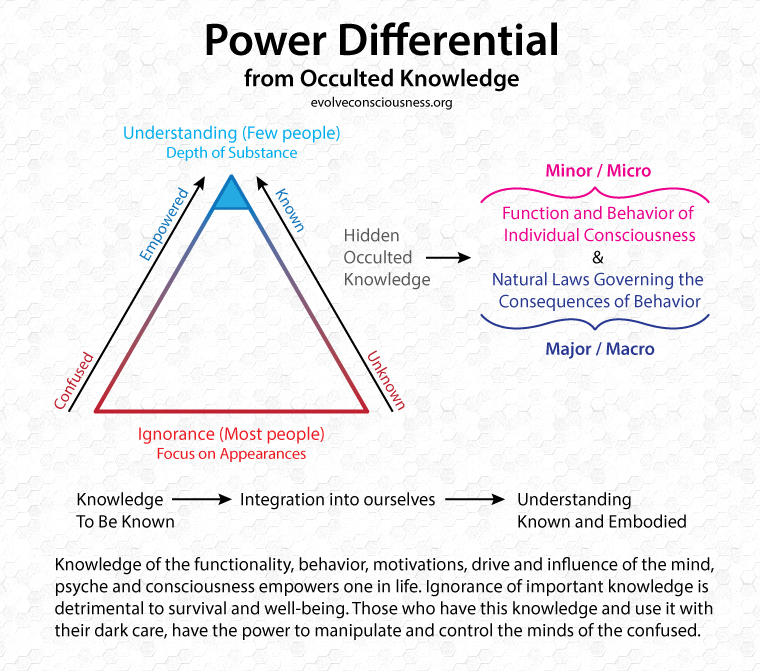 The hidden, occulted aspects of reality and ourselves are the Key to regaining our Power. Gaining occulted knowledge about the real substance of ourselves and losing attachment to the illusory self-images of appearance is how we shift the Power Differential back into our favor, Empowering ourselves.

The psychological and “spiritual” alchemical process is how we Empower ourselves to Change and create the Heaven we want to live in.

The Actualized, Realized, True Self, Higher Self, Authentic Being, can only be progressively realized in time through self-examination, self-reflection of our falsity, bullshit, wrongs, errors and incorrectness. This is alchemy. It is facing the mirror in full honesty and self-respect, having the Courage to own up to the Responsibility of our Actions and delusional appearances we have bought into and accepted as reality. Once we Face the reality of ourselves and the world, the beauty and horror, good and bad, positive and negative, light and dark, and Accept this current condition as it is, in Truth, then we can begin to Change, Heal, Grow, Evolve, Improve, Sublimate, Transmute and Purify ourselves. We can develop the Care, Courage and Will to Empower ourselves with Knowledge and Understanding of reality, targeting the root causal core foundational factors that have us continually collectively co-creating self-inflicted suffering and Hell on Earth. It’s all up to each one of us.

Purpose in Life (Seek Infatuation with Appearances, or Deeper Substance of Meaning)

When you are attached to illusions and false appearances, you are grasping onto things that aren’t there for support and grounding in your life. Essentially, you are not grounded in reality, but are floating in delusional a fantasy of imaginal spells controlling your mind, heart, and consciousness. Locked in a prison, thinking you are free. What a joke this all is, a sad joke.

That movie was all about the Noble Lie, to manipulate and control society with the allegedly “greater good” Noble Lie of “necessary evil”. It’s all manipulation through false appearances. The only hero was Rorschach, a man after my own heart, and as the fate of the hero often is, they get sacrificed and murdered by the delusional people around them who do not Care for Truth like the hero does. They are sacrificing the Truth and the hero who defends her.

People are so in fear of being corrected that they run from the True Self.

(Thanks Michael Kovach for the idolatry comment, and Scott Seaton for the Authentic/Inauthentic post. It adds more definition and correspondence to this framework I was developing. This has been developed with initial understanding gained from Mark Passio’s What on Earth is Happening podcasts and Natural Law Seminar)