Consciousness and the Cerebral Hemispheres 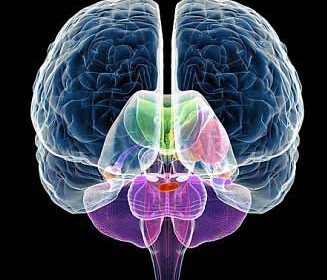 The Left and Right Cerebral Hemispheres 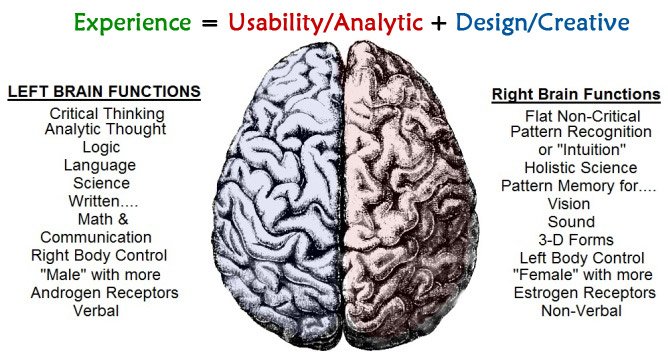 The neocortex as a whole is responsible for all higher order thought processes, conceptual thinking, creativity, logic, music, reason, analysis, intuition, etc. The left and right cerebral hemispheres are related with the sacred masculine and feminine foundational qualities of consciousness mentioned earlier. We should not be neglecting one side and its qualities over the other or thinking one side is good and the other is bad. Developing both foundational qualities is the key to a properly functioning balanced brain and expanding our consciousness to higher states of awareness (or activation/bringing online).

The Effects of Left and Right Brain Imbalance or Predominance

The left and right cerebral hemispheres are not completely separate because they are connected through the corpus callosum, a bridge in the midbrain allowing information to flow in either direction. An imbalance or predominance of one brain hemisphere over another disharmonizes and disrupts the neocortex in its intended role of being the executive command center of the whole brain complex — the forebrain, midbrain and brainstem.

Someone that mostly spends their time and pays attention to the physical world of events, physical life, and daily occurrences through what they do and the information they receive — what they look at, what they read, what they hear, both in the media and with interactions in the world with others —will spend less time or not care about deeper thought to anything holistic, creative or spiritual and the chronically engaged left brain will come to dominate the neocortical functions of the brain with the right brain diminishing as a result. The reverse occurs with right brain imbalance. More people are imbalanced towards the left side but most people are imbalanced to one side, the other or both.

Chronically living in the right brain modality of thought — nurturing, creativity, imagination, feelings, etc. and always in a spiritual state of mind, not being grounded and considering the physical domain important by always thinking of the world to come, living for basic pleasure and to feel good, not wanting to look at anything that is so-called dark or negative, not wanting to engage in problems, engaging in escapism — will destabilize the whole-brain complex as well with the right brain becoming dominant to disrupt the balanced neocortical executive command functionality.

Imagine a CEO making executive command decisions about the direction of the company who then becomes ill requiring middle management to step in and fulfill executive functions. The CEO is representative of the neocortex disrupted when one hemisphere dominates over the other, while the mammalian and reptilian brain complexes are the levels of management that will invariably start to assume executive control over the whole-brain and therefore behavior of the individual. The proper functionality of the neocortex in making good reasonable executive decisions has become damaged in such a way that certain neural pathways and connections do not function as they would in a balanced operational capacity and certain portions of electrochemical activity become darkened.

A left brain imbalance leads to the R-complex dominating over the proper functionality of the limbic emotional brain by not sending certain chemicals that allow us to experience emotions as feelings in the body the same way that a person with a healthy, holistically functioning brain would. The R-complex essentially becomes the executive controller of the whole-brain with the consciousness fundamentally governed and living in the reptile part of the brain (survival, stress, fight or flight). Conversely, chronic right brain predominance has the limbic emotional brain run haywire; instead of dormant it is hyperactive and out-of-control. A person becomes a slave to their feelings and emotions unable to discern truth and believing whatever suits them according to how they want to feel. In extreme cases the emotional dominance leads to someone becoming far too passive and not standing up for themselves, as opposed to the left brain imbalance of someone becoming far too aggressive.

Schism of the Mind 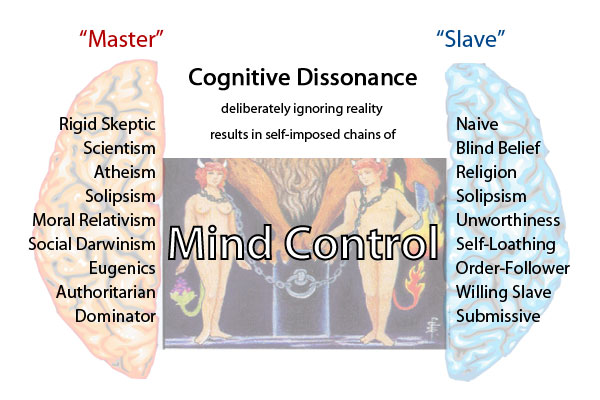 Chronic left brain imbalanced living will draw one towards the dominator tendencies and develop into the “Master” consciousness of wanting to control other people’s actions, behavior and the decisions they make with physical aggression as a result of disobedience. The right form of chronic imbalance creates obedient tendencies and develops a “Slave” modality of consciousness where someone can follows orders, have addictive tendencies, and have feelings of unworthiness or self-loathing. One imbalance develops a slave-driver dominator; the other develops a dominated slave. This is how most of the world is currently functioning, or dis-functioning, and experiencing.

The manner in which the brain functions greatly influences how we behave and what we experience. There are people that understand how we work and they are using that knowledge as a weapon against us because most of us are completely uneducated and ignorant about how methodologies of mind control really work. We have to take care of the ‘Temple in Man’ and understand how we work, operate and function in order to take care of this great gift and not fall into the negative consequences that our ignorance creates.

The Pineal Gland and Symbolism of a Unified Consciousness 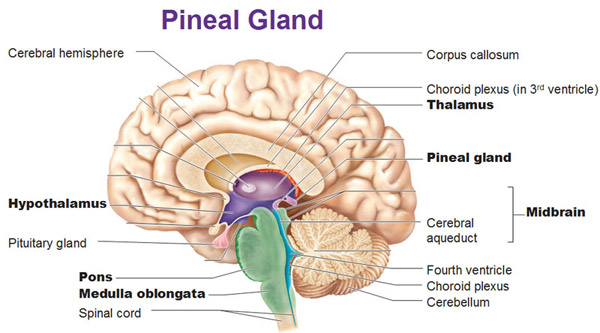 A balanced state between the left and right hemispheres occurs when they come into conjunction, unison, and harmony with one another and the masculine and feminine don’t dominate over the other but are in the alchemical wedding, the marriage between the sacred masculine and the sacred feminine. The neocortex acts in its proper role as the executive command center over the whole-brain complex, and is not fractured by an imbalance and impediment of higher order thinking brought on through living in a chronic emotional state or a fight or flight, stress, or desire to control ways of being. A balanced consciousness recognizes they are neither a master nor a slave of other beings, but can only be a master of themselves in a state of Dominion, self-rulership, self-ownership, and self-governance, one that is not divided amongst themselves. As we think, so we feel and so we act. We are not in internal opposition, conflict or contradiction in our thoughts, emotions or actions, but our conceptions, feelings and behavior are integrated, consistent and coherent all around without engaging in doublethink or cognitive dissonance to hold onto particular illusions for validation of our current condition.

We must face ourselves in true honesty and self-respect and rectify the contradictions in the ways that we think to no longer deceive ourselves, so that we can recognize the way we truly feel and then engage in proper action as a result. This is how we can change our situation because it is only a current condition so long as we choose to keep it this way. We have to care enough and have the courage and will to face the reality of what ‘is’, the truth, within ourselves and in the external world in all its beauty, positivity and goodness as well as its horror, negativity and badness, in the light of truth and honest self-respect looking at ourselves in the mirror and what the consequences of our actions mean, shedding light on the darkness, demon, negative and shadow of ourselves and the world in order to learn and accurately understand the mess we have got ourselves into. We cannot remain in denial and avoidance of those things we do not wish to look at and continue to accept those comfortable lies from others and ourselves, but must face the truth in order to heal the self-inflicted wounds. We can come to recognize and admit our wrongs and through courage and will choose to change our behaviors, habits and actions in alignment with what is good, right and true, what is in alignment with our true Selves, to be as a Phoenix and purify ourselves of those things we recognize do not serve us along our positive evolution in consciousness, to sublimate, transmute, purify and heal ourselves by rising from the ashes of who we formally were, to be reborn anew in a reconstituted way having left behind that which we no longer desire to be.

The balanced brain can be symbolized through the third eye, one eye, all seeing eye, and pineal gland located in the center of the head inside of the middle chamber, the limbic brain. The pineal gland is shaped like a pine-cone and is involved with the hypothalamus, hippocampus, and the pituitary and amygdala gland in the Hypothalamic–pituitary–adrenal axis, which is a major part of the neuroendocrine system that controls reactions to stress and regulates many body processes. When the pineal gland is said to become active through the balancing of the brain hemispheres, consciousness opens up and true discernment can be made, distinguishing truth from falsehood. This can be seen as a physiological activation or a symbolic one represented by the manifestation of consciousness in alignment with reality, what ‘is’, the truth.

Other symbolism associated with this modality of consciousness is represented by the unification of the upward and downward pointing triangles. The upward triangle is the masculine Yang energy and is referred to as the blade and is a primary phallic symbol because it is associated with the thrust force through which we project outward as our actions in the world. The inverted triangle is the feminine Yang energy referred to as the chalice or womb, and is the internal aspect of consciousness. Bringing these two symbols together describes consciousness in a unified balance state and has been referred to as the ‘Seal of Solomon’ with the two triangles interlocked and neither one is on top of the other. The name Solomon can be divided into ‘sol’ and ‘mon’ which are the sun and moon representative of the sacred masculine and feminine. This is also symbolized as the chemical, electrochemical or alchemical wedding because the chemical and electrical activity of the human brain is functioning in wholeness, oneness, and harmony.

To solve the problems we are facing as a species we need to work on ourselves and what some traditions have called the Temple inside, our consciousness, psyche or mind represented by the human brain. Our consciousness, as it is manifesting through the faculties of the brain, is the underlying causal factor of what generates our experience by the expressions of our thought, emotion and action. In this sense the external world we contribute to and co-create is truly a reflection of what is going on inside of us as we manifest outwards through our actions. If the physiological component (brain) through which consciousness is able to manifest in this experience is not functioning properly, we don’t engage in much higher order thinking. We can end up engaging in destructive behaviors to the brain such as substance abuse, and activities such as cage fighting, boxing, riding a motorcycle without a helmet, etc. There is very little respect for the Temple inside of those people, in order for them to desecrate a gift like this for whatever justification or money.

Next article: Consciousness and Polarity as Natural Law Expression

Previous article: Consciousness and the Brain

Information mainly sourced from: What on Earth is Happening #001 and #002