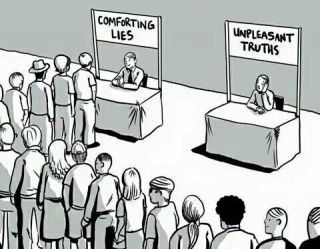 How much courage do we have to honestly face uncomfortable aspects of ourselves, like when we do something wrong?

Can we honestly take responsibility for the actions we do?

Or are we too attached to ourselves to be able to honestly see what we are doing?

Your actions reflect you at the time. You can change and no longer do an action into the future. But when something is done, it’s done, and you can’t undo it.

When trying to get someone to honestly face what they have done, some people believe there is a need to differentiate between the actions and actor that created them in order to prevent shame, guilt and the negative connotations that come with facing a wrong-action.

The idea is to deceive someone into being able to honestly look at the wrong-actions, by dissociating them from their actions. Convince the ego-self-“I” that everything is safe, no one is “attacking” them or their attachment to false beliefs that they have adopted as part of their identity/self.

If I can get you to accept that your actions are not “you”, you will be comfortable in looking at the actions without automatically associating it with yourself. Rather than honestly being able to recognize what you did, you, the actor, want to not recognize what you did in reality, but just look at it as an action without blame, shame, or guilt.

Someone can convince you that your actions are separate from you, as if they don’t come from you, in an attempt to get you to listen to them without getting defensive about what you did.

Actions represent a person and who they choose to be at the time. Rather than accept reality as it is, I’ll just con you into believing you’re not responsible for the actions you did, it’s not “you”. Then you can honestly deal with yourself by not dealing with yourself?

I don’t play these dissociative mind games to bypass getting people to honestly face themselves in the mirror. Enough of trying to prevent people from feeling the bullshit they engage in. Truth is the way out. See and feel the reality of what your actions have done.

Comforting lies about ourselves are more desirable than facing the hard unpleasant truth about what we are doing.