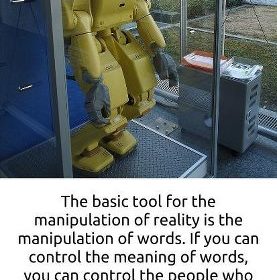 Simplify language, reduce many words to singular meanings, combine meanings into single words, and you introduce ambiguity, confusion, and cryptography of occulting the true meaning of reality. Instead of one specific word for a given state or process in reality, we apply words in many contexts making it a processes of deciphering to read some thing. This is taken to a perversion in Orwell’s 1984, but it may yet come to pass, as we see the “Common Core” degeneracy of learning being rolled out.

Optionally, you can read most of it here:

“It’s a beautiful thing, the Destruction of words. Of course the great wastage is in the verbs and adjectives, but there are hundreds of nouns that can be got rid of as well. It isn’t only the synonyms; there are also the antonyms. After all, what justification is there for a word, which is simply the opposite of some other word? A word contains its opposite in itself. Take ‘good,’ for instance. If you have a word like ‘good,’ what need is there for a word like ‘bad’? ‘Ungood’ will do just as well – better, because it’s an exact opposite, which the other is not. Or again, if you want a stronger version of ‘good,’ what sense is there in having a whole string of vague useless words like ‘excellent’ and ‘splendid’ and all the rest of them? ‘Plusgood’ covers the meaning or ‘doubleplusgood’ if you want something stronger still. Of course we use those forms already, but in the final version of Newspeak there’ll be nothing else. In the end the whole notion of goodness and badness will be covered by only six words – in reality, only one word. Don’t you see the beauty of that, Winston? It was B.B.’s idea originally, of course,” he added as an afterthought. (1.5.23, Syme)

“Don’t you see that the whole aim of Newspeak is to narrow the range of thought? In the end we shall make thoughtcrime literally impossible, because there will be no words in which to express it. Every concept that can ever be needed will be expressed by exactly one word, with its meaning rigidly defined and all its subsidiary meanings rubbed out and forgotten.” (1.5.23, Syme)