Most of us have a common sense to prefer to deal with others who demonstrate that they are fair, reasonable and can possibly be helpful as a result. Those who demonstrate unfairness and irrationality tend to be people that will not help us find solutions because they are incapable of doing so.

People who display harmful intentions, outright harmful actions, or behave unfairly will elicit a negative reaction in most people. This is true from adults all the way down to young children. We can evaluate an individual, not necessarily based on how they treat us, but also based on how they treat others in a third-party capacity. We prefer others who demonstrate fairness or a willingness to help. 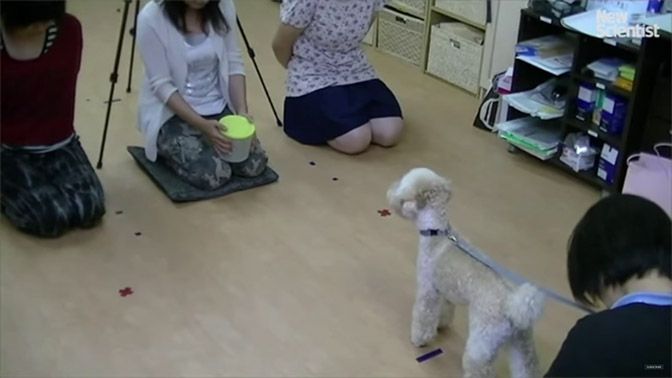 A new study conducted by researchers at Kyoto University and published in Neuroscience & Biobehavioral Reviews, describes experimental studies of dogs and capuchin monkeys where they differentiated between people who are helpful or unhelpful in their actions towards others.

One test had a monkey watch a human actor struggle to open a container with a toy inside. The actor but then present the container to a second actor who are either help or refuse to open it. Each person then offered food to the monkey. If the second person was helpful and tried to help open the container, the monkey didn’t have a preference or rejection for any of the two people. But when the second person refused to help, monkeys were more likely to take the food offered by the first person. The refusal to help is recognized as a negative behavior which tends to elicit animosity rather than favorable acceptance.

A third test was done with dogs see who they preferred between how two individuals treated their “owner”. Our identification and valuation of others is based on the degree and frequency of interactivity we have with them. An animal companion will value the person they have been closest to their whole life the most, which is the “owner”. When the dog’s human companion tried to open a container and asked for assistance from either person, but was refused help buy one of them, the dog also tended to prefer a treat offered by the one who did help. If both participants did try to open the container and therefore indicate they were helping, there was no preference from the dog.

Here is the study demonstrated:

Dogs judge humans by how we treat others

“If somebody is behaving antisocially, they probably end up with some sort of emotional reaction to it. Chances are that if these animals can detect cooperative tendencies in human actors, they also can in their fellow primates.”

Animals in their natural habitat likely use similar processes to evaluate members of their own species and who they will choose to cooperate with. This indicates that our own more developed and evolved innate sense of morality (conscience from consciousness) and our ability to understand it as morality, likely comes from such primitive evaluations of others as demonstrated by nonhuman animals.

“I think that in humans there may be this basic sensitivity towards antisocial behavior in others. Then through growing up, inculturation and teaching, it develops into a full-blown sense of morality.”

The study concludes that the capuchin monkeys and dogs don’t have a preference for who is actually a helpful individual, but they do have a preference and demonstrate clear avoidance of individuals who are not helpful or behave unfairly. The monkeys avoided people who didn’t reciprocate and saw them as violators of that principle of reciprocity. The intention they discern from the behavior of another affects their evaluation of how to interact with that other. Whether a human animal, or nonhuman animal, we are all “others” to each other in the animal kingdom since we can interact and relate as animals with consciousness and the corresponding thoughts, emotions and actions we exemplify in varying degrees.

Young humans or nonhuman animals (like a monkey) will avoid choosing someone or taking an item offered by them if they have demonstrated previous antisocial behavior. A negativity bias forms possibly from the feeling of fear, dislike, distrust or feeling like a subordinate.

This evaluation process might help to stabilize complex social systems through the exclusion of bad social actors. This helps individuals avoid harmful social interactions by judging who is more likely to engage in harmful social interactions. Additionally, intuitively recognizing disfavor towards those who harm the social system can discourage ourselves from engaging in the same bad behavior since we don’t want to be excluded from the social system by someone else either.

A basic tendency to align with morality seems to be based on reputation that others form towards our behavior. Otherwise, if no one cared how we behaved (or if we didn’t care how others behaved) and there were no consequences to negative behavior, then there would likely be no imperative for us to be “good”. In beings that have a consciousness, like all animals do, those who are incapable of a comprehension of morality as a concept, aren’t necessarily being moral in a sense of comprehending what morality is, but are more likely scoring each other based on the appearance of reputation that behavior will tally up in memory.

In terms of us evaluating others for their morality not simply based on how they treat us, but also how they treat others, this is how we are supposed to form a true unity based in objective behavior in reality, whereby we stand for what is right, good and true in alignment with moral truth.

Logic and morality should have us recognize the other as ourselves who can be in a similar situation, and empathize to help them as we would want them to help us. Do unto others as you would have them do unto you, the golden rule. This applies whether we are evaluating a human animal, or nonhuman animal. We are all others to each other.

Our desire to avoid conflict or maintain favoritism and attachment (loyalty) to the one who is wrong, can prevent us from actualizing, realizing and individuated ourselves in alignment with the person who is right, or to what is right, good or true in general. Our personal attachments to others will thereby prevent us from actualizing and creating morality into the world.

Some of you may have had people try to manipulate you into choosing the wrong side based on being loyal. I know this is an argument used by friends and spouses in order to defend the wrong position just because it’s coming from someone that you are personally attached to and “supposed” to be loyal to, “no matter what”. That is a fools argument.

This is why an understanding of truth vs. falsity, right vs. wrong is important by first caring for truth. Then we can put truth and moral truth above any self-interested or personal attachments we have towards others.