Causality is intimately connected with free will and consciousness. We have great degrees of freedom in our ability to choose what to do and the effect it has upon reality.

As each of us acts in reality, we input into the collective field, web or causal forces that interchange effects in existence. What we all do creates the human world we have constructed in the past and into the future. 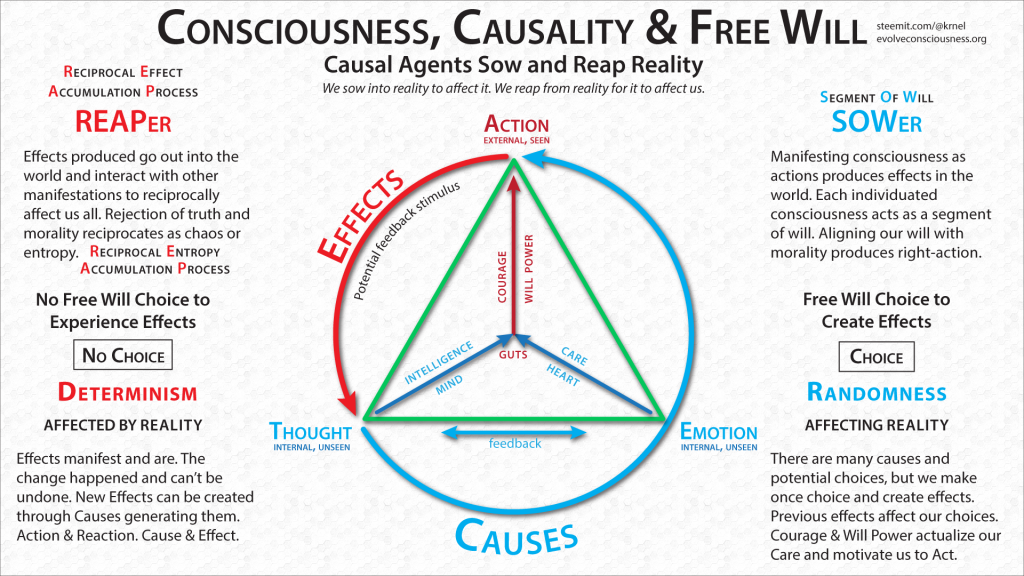 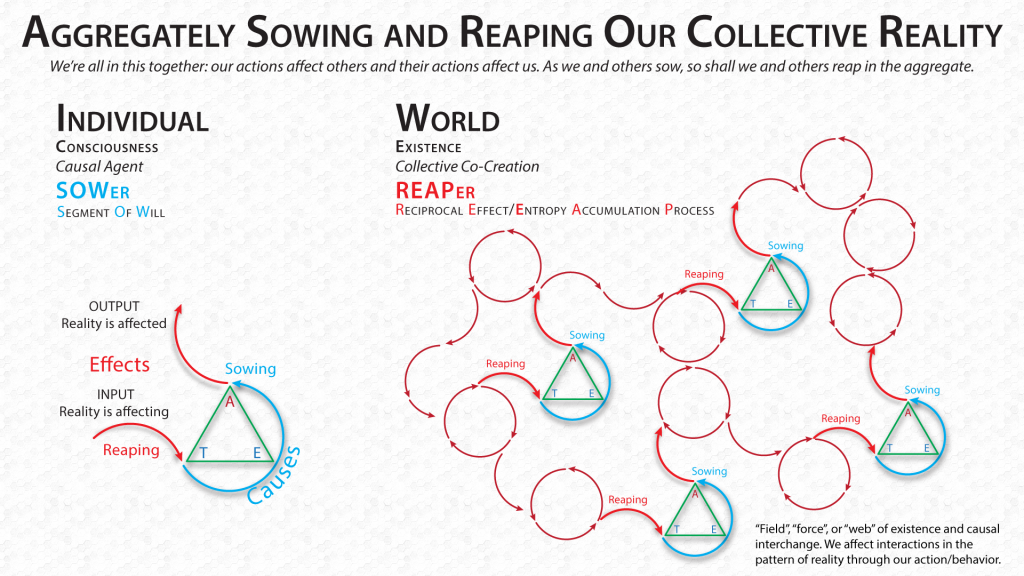 Starting in the center. The Trinity of consciousness has been explained more in-depth in previous posts.

A brief overview is that we receive input from our thoughts in the internal unseen causal domain of consciousness that feedback with our emotions, where our “mind” and “heart” develop the “guts”, or the intelligence and care develop the courage and willpower to eventually act and create effects into reality.

With the causal realm on the right, we are each a segment of will, as each of us is a willpower making free choices to act. We are a sower that generates causal forces from within our consciousness. When we act as a result of our internal causal forces, we produce effects into the world. As each of us acts we collectively aggregate all of our behavior to create our way of life.

We have the free will choice to create effects. We are the random free will component in a universe of causal forces that do not have free will choice. We have greater power to affect reality despite our small size due to the power of consciousness and its ability to affect, alter, manifest, generate and create into reality.

There are many causes that we can generate and potential choices that we can make, but we always make one choice. Our actions now and in the past affect our choices into the future. The initial care we have for something in our being gets fueled with our courage and willpower to act upon it.

To the left is the realm of effects. Since we are each a sower of causes generating into reality, reality is the reaper that reciprocates and feeds back upon us as a stimulus for us to intake once more and begin our internal processing again. The acronym I came up with for “reaper” was reciprocal effect accumulation process in general.

Each time we and others act in the world, this produces the collective aggregate behavior that establishes the norm of the society we live in. Those around us feel our affects the most, and they have the most power to reciprocate an effect upon us. If we step out of line, and step out of the boundaries of acceptable behavior (such as the boundaries of moral law), people will reciprocate a force against that violation. This is when people act to set right the wrongs that were committed. If issues/problems/wrongs are ignored, then there is an accumulation of these negative effects and this reciprocates back as chaos or entropy.

Rather than simple effects accumulating and interacting in a causal “web”, now it’s negative effects that accumulate and feedback upon us as chaos, or entropy.

Contrasted to our power of consciousness to provide randomness as a causal force, the effects that happen are deterministic. Determinism is a component of the universe that we belong to in which randomness is also a part of because of our ability for free will choice to alter things outside the “natural law” causative interchange within existence.

We are affected by natural laws of causality in reality.

Whatever happens is ‘what is’ and can’t be undone. However, there is a power in learning from the current condition, such as learning from our mistakes, so that we can change our behavior and create new effects through our causal generative force of consciousness.

This is the power of action-reaction and cause-and-effect that we have within our own consciousness to do things that will create effects into reality that will affect other people and stimulate them into processing and responding in their own way. Speaking up against falsity can unite people in truth to engage in right-action.

The second infographic explains how each individual behavior aggregates into a collective sowing and reaping of reality. Once this is understood, we can see that in the end we are all in this together, our actions affect reality and affect others, and the actions other people do affect us as well. If we are headed off a cliff, then we need to take action do something that is required, even if people don’t want to face the reality.

We reap what we sow ourselves, but we also reap what others sow because we are in one aggregate system of causal interchange, not in independent isolated systems as an island isolated from everything else.

There is one planet space-ship Earth we live on. As such, we are all in this together.

Wrong-actions affect us all in the end, and as one suffers we all suffer in the aggregate. The only way to true unity (within ourselves and with others) is through truth and morality so that falsity and wrong-actions can be recognized and let go of.

Our individual consciousness is a causal agent that acts as a segment of will and is a sower into reality.

On the left in the infographic, is an individual representation of how this works. We receive input of effects from reality that we are reaping from, which is the deterministic natural law causal force that we don’t have a choice in receiving. Then we process that stimulus in ourselves that acts as a causal force and we sow actions to affect reality. Causes do the sowing, effects do the reaping.

The existence of our human world and way of life is from the collective co-creation of all of our actions and behaviors together to produce the world we have around us.

Reality and existence is the reaper that reciprocates effects or entropy as an accumulation process of all our actions and behaviors that creates the way of life we have.

If we destroy our planet then we’re all going to feel it.

There is a “field”, “force” or “web” of existence and the causal relationships that occur. We have interactions with existence and each other in that pattern of reality that we affect through our actions and behavior.