I like to watch some shows that deal with scenarios of right vs. wrong, good vs. bad, etc. I don’t usually watch cop shows because of the high level of propaganda to portray police as saviors.

They often abuse this power differential. In developing nations more so, with a much large degree of corruption and abuse of power. But it’s even strong in the US as well if you care to find the stories. Like people being raided by SWAT, executed, and the cops don’t release any information was to why someone was murdered in their sleep beside their pregnant wife. Or they frame people saying they fired first and the cops had to defend themselves, then later it comes out that there were no guns.

When the corruption or abuse of power comes out, sometimes it goes to court, and sometimes there is a punishment, but not often. Most of the time its a paid or unpaid suspension, and often nothing happens and they are back to work. They blue privilege and loyalty is strong.

Police are hired goons for the state that follow orders and oppress people if asked to. You an look at protests in the US and abroad., as one type of example.

So anyways, but to the show I want to talk about. It’s called Bosch, produced by Amazon Prime and it’s in the 6th season. This season has an interesting propaganda component, as they portrayed the sovereign movement as anti-government conspiracy nuts and domestic terrorists.

The sovereignty movement is about getting out of the authoritarian control system of the government, and living free. It’s about freedom at the core, freedom from government authority over our lives that enslave us to taxation and other forms of control. Some people might be a bit cooky, as the show depicts, where a guy shoots at cops who are taking his brother for questioning and ends up dead rather than let his brother get questioned.

They then enter the house of the aforementioned dead person, and find a whiteboard with “The Federal Reserve Conspiracy” with some irrelevant nonsense written underneath. 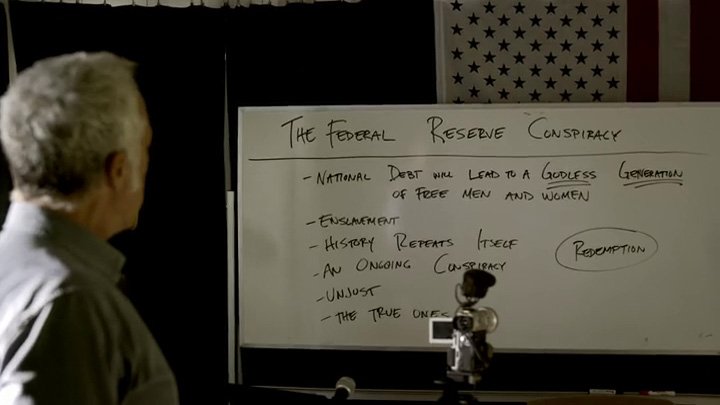 None of this addresses the scam of the Federal Reserve system, fiat money, fractional reserve banking, or having a private institution loan money to the government at interest rather than the government create it’s own money and have less debt.

The show is portraying people who care about freedom from government as nutty ‘conspiracy theorists’, as oppose to recognizing deceptions and enslavement that is around us.

As Bosch walks around, there is another posted that is supposed to associate with the dangerous ‘conspiracy theorists’ and crazy freedom-loving ‘domestic terrorists’ people: “Don’t tread on me”. 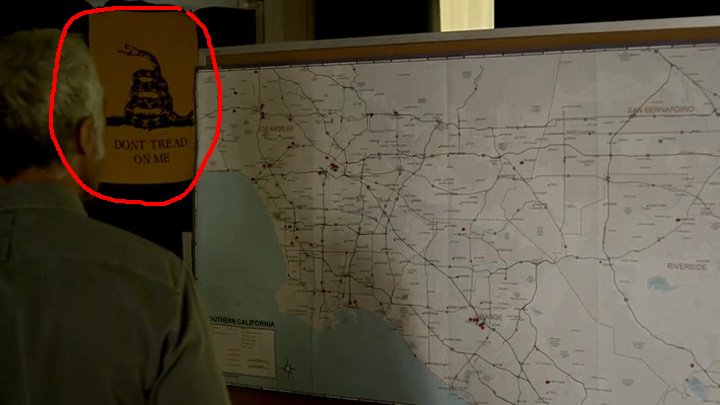 This meaning is about not letting people, like the government, walk over your rights and freedoms as if they have the right to do so because they declare themselves the ‘authority’. We are all supposed to be equal, but our reality is that some people are given more rights than others.

For those who don’t get this. Do you have the right to steal, assault, murder or rape? No. If you and another person were somewhere, can you give them the right to steal, assault, murder or rape someone? No, you can’t give someone rights that you don’t have. No one has those rights. But governments have seized imaginary ‘rights’ for themselves that no one else has. And we let them have it. We think that we can delegate those rights like theft and assault, spin them into “justified” actions for the government or it’s employees, even though they aren’t rights that can be delegated since no one has the right to do those things.

At least the show does show corruption and the bad side of some cops. But this psy-op on people who have issue with the Federal Reserve system, or don’t want to be oppressed by the illusory belief in authority expressed by government, was something many people will buy into when watching this show.