Philosophical Metaphysics – Categories of Being

What can the purpose of words symbols tell us about how they reflect aspects of reality? Word symbols are powerful. They are the basis of actual “magic” in our lives, as my previous posts have been demonstrating in the series on the Power of Consciousness: (1, 2, 3, 4, 5). Philosophical Metaphysics is an important subject to understand. Part one of Philosophy is here.

We use words to describe and categorize what we see and understand about reality. Word symbols and language are at the core of philosophical metaphysics as first demonstrated by Aristotle. Aristotle described a model or framework to structure and classify the various aspects of reality. These are known as Categories of Being.

Philosophical metaphysics and language are crucial foundational blocks in progressing with the Trivium Methodology.

Word symbols are important. They are used to represent, reference and correspond to something. We can invent words to reference something real that actually exists in objective existence, but also something imagined that only “exists” in our subjective consciousness. Just because something can be imagined in the “light” of our mind’s eye, does not necessarily mean it exists in the light of reality. Perception is not de facto reality. Perception in consciousness does not dictate an automatic reference for existence in reality.

The real things we can reference with word symbols and language are objective in reality. The basics of this are as follows. Things 1) exist in themselves, either as particular primary substances (iron, KrNel) and universal secondary substances that are said of primary substances (metal, human); or 2) they exist in something else, as being conditionally accidental, that are dependent on the substances and may or may not be present in some primary substances or another (green, red, blue; tall, short; wide, narrow).

I will skip the technical specifics of understanding this for now, as it involves complex terminology that would take long to explain clearly and divert from the purpose of this introductory material. This flow chart will give you an idea of how it works though. 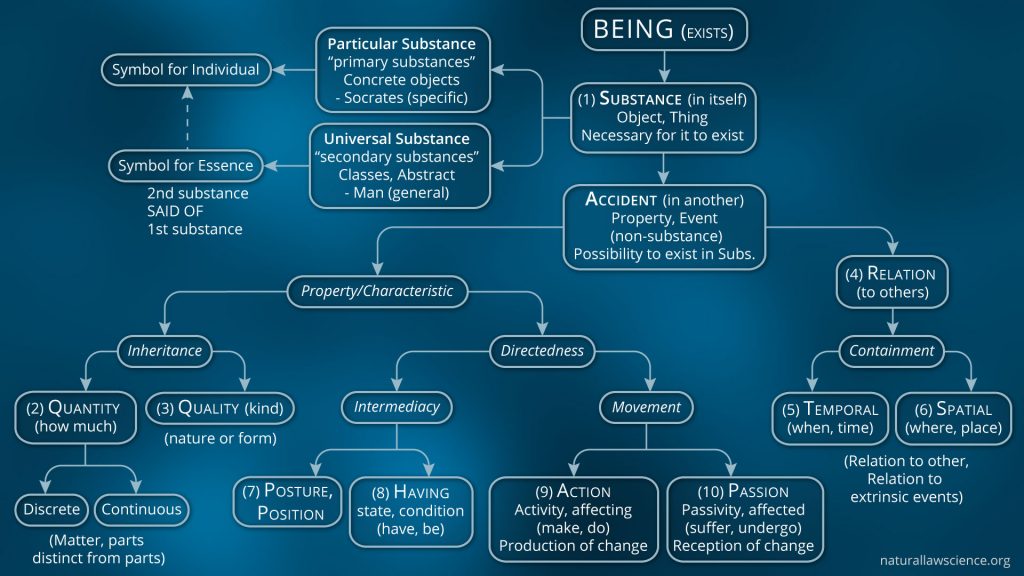 The conceptual things we can reference with word symbols and language, that don’t exist purely in themselves or in another, can also be real, but they can be unreal. Words describe aspects of reality that are there, or we imagine they are there. This is where it gets trickier. It’s easy to see a color or size present in something else, but some of these accidental qualities can be measured, some of them can’t but we can see them expressed in reality in some form.

And some things are purely fictional from our imagination in attempts to invent answers to questions about reality, about our origins, about the universe’s beginning, about our purpose, etc. We can easily fool ourselves with trying to invent answers to questions that create a gap, void, abyss and darkness in our attempt to understand reality. When we invent a question with no answer, it creates a gap, and makes us uncomfortable, uneasy, insecure and fearful of that unknown aspect of reality. Then we scramble in imagination to invent an answer to fill that gap of comprehension created by the question.

For example, actions exist in reality, but they aren’t a color, they don’t have shape or size, they are dependent and contingent upon something to create them into existence. A causal agent, a particular primary substance, is required to create, manifest and generate an action into existence. Prior to that creative act, the action did not exist. Actions are not permanent accidental properties and qualities, like the color green is for a plant. A color is created and remains, it persists in time and space for recognition and identification. Actions are created but do not persist in time and space for them be recognized and identified. Regardless,actions are objective, demonstrable.

With that basic understanding, we can proceed to understand the importance of language to further grasp and make sense of reality and higher order constructs, models and frameworks to reference the variability, diversity and multiplicity of the complexity within reality. Truth, existence, reality and the universe is complex, despite some truths being simply explained, some are not so simple.

Stay tuned for the next post which will get into the meaning of words more. Words are primarily created to describe and reference reality/existence. They are very important, as I have been previously talking about through my posts on Word Symbols and “Magic”: (1, 2, 3, 4, 5)