The definition of terms is required so that we can be on the same page of understanding about something we are talking about. A word-symbol is imbued with meaning to reflect something about reality (or even unreality). Objective and subjective are words we need to understand.

Etymology reveals the true meaning of words. Words reflect something we are trying to communicate about reality.

Digging into the etymology of the words objective and subjective shows exactly what they mean.

1610s, originally in the philosophical sense of “considered in relation to its object” (opposite of subjective)
Meaning “impersonal, unbiased” is first found 1855

late 14c., “tangible thing, something perceived or presented to the senses,”
Latin obiectus “lying before, opposite“, obicere “to present, oppose, cast in the way of”
from ob “in front of, towards, against” (see ob-) + iacere “to throw“

c. 1500, submissive or obedient
In early Modern English as “existing, real;” more restricted meaning “existing in the mind” (the mind as “the thinking subject“) is from 1707

early 14c., “person under control or dominion of another,”
subiectus “lying under, below, near bordering on,” figuratively “subjected, subdued”
subiicere “to place under, throw under, bind under; to make subject, subordinate,

“A subject is one who perceives or is aware; an object is the thing perceived or the thing that the subject is aware of.”

The meaning as applied to an understanding of an individual subjective time and space point-of-reference, is for it to be submissive to the overarching objective reality within which it subsides.

The individual subject is submissive and obedient to the universal “object” and “master”: reality, existence or truth. “All is One”. All (everything that ‘is’, truth, reality, existence) is One (uni-verse, turned in to one). That is the “master” grouping order that we are a part of: “One Truth” as a universal grouping concept within which that are many particular specific truths. We as consciousness subjects, are also subjects as specific objects which subside within the larger objective universe (many as part of the “all one”).

We don’t dictate what is in reality at our whims or fanciful fantasies. There is an objective reality that we don’t simply control outright, but can alter or change through our actions with wise understanding or foolish confusion.

Similarly, you can’t simply define a word to mean anything you want after it has already been imbued with specific meaning to reflect and reference something in reality or unreality. That creates confusion. If everyone did that at their whim, then words would have no specific definition and could mean anything. Then we wouldn’t be able to communicate about anything.

Definitions de-finite the almost infinite array of diversity, multiplicity and variability in the universe, reality and existence.

Reality, existence and truth will stand in our way as an opposer to our falser ways and knowledge. If we want to be fools and live in an unreal, false and lower way of living that goes against principles we can discover, then we are only setting ourselves up against successful alignment with reality. We essentially ignore the obstacles that are thrown at us when the consequences are reaped for the actions we sowed. We don’t learn from our mistakes or think of the consequences ahead of time.

We are our own worst enemies.

We judge, offend and insult ourselves by going against reality, existence and truth.

We are submissive to the forces in reality and existence that form part of the overall truth of what ‘is’. Denying our position in reality only leads to ignorance, contradiction, confusion, control and chaos, all from the fear of recognizing truth that children can plainly understand. Abstractions of higher order consciousness processing can fool us all too easily and take us away from the grounding in reality and truth.

Aligning ourselves with truth means to align our subjective perception of reality, the map of reality, with the actual objective territory of reality that exists. 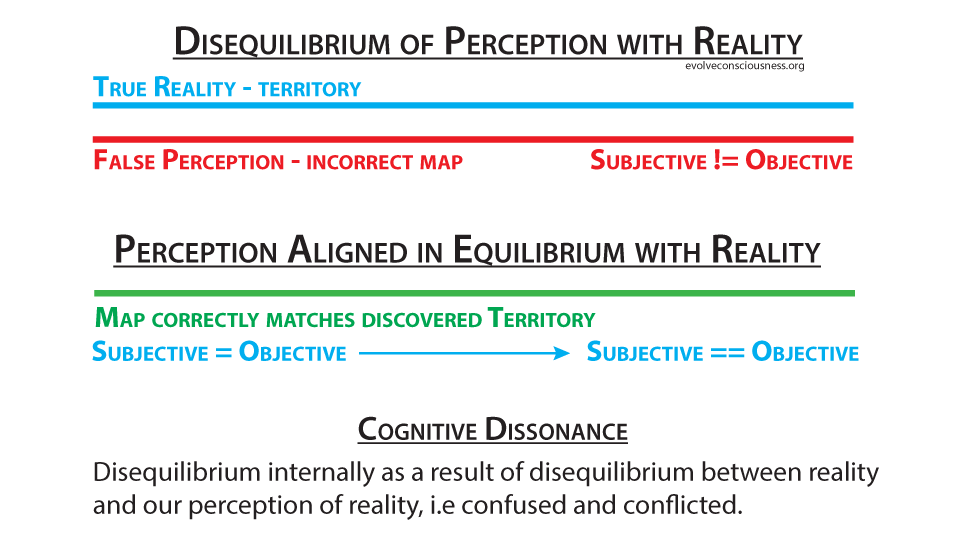 Our subjective perception of reality needs to be aligned and brought into harmony and equilibrium with objective reality.

We are not to place ourselves above reality, existence or truth, and we can’t, because we are within reality and existence.

Cause and effect are felt within the ebbs and flows of interacting forces, such as causal agents like ourselves. We are placed under reality, not above it. We are subordinate to reality, existence and truth. We don’t magically create the literal world around us. We don’t dictate and invent 2+2=5. Reality shows us that 2+2=4 as we discover truth about reality and existence.

We are not above and beyond reality or existence, therefore, we are subject to what happens in reality.

The words objective and subjective reflect this meaning directly in the etymology.

Learn the true meaning of words to have a more accurate understanding of how to relate, reference and reflect the objective reality we share in common through word-symbols, language and communication.

This is the general understanding from the etymology. I may get more into specific contextual meanings (which create additional confusion) in forthcoming work.

Look at our world of coercive authoritarian external control. We are ignorant and confused and this has led to control worldwide, leading us into increasing chaos under an illusion of “order”. Words matter. They shape our understanding and perception of ourselves and the world.