Is the Mainstream Media Really Fair and Balanced? 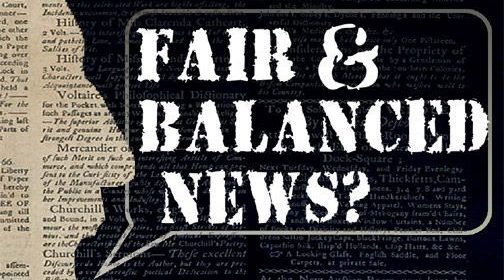 Mainstream media and Wikipedia often try to emphasize an impartiality. They say they are “fair” and “balanced”. They say they “don’t pick sides”. Is that the case? Maybe sometimes. 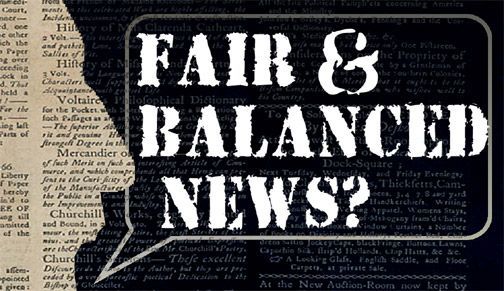 source
What about the side of truth vs. falsity?

They say, they are the “real news” while alternative media is not “real news”. Donald Trump is even pointing to the media and calling them out for fake representation of information, which they deny.

*How can they purport to present “real news” in reality, if their concern is for impartiality, neutrality and presenting “both sides” when they can’t both be right? Don’t they dig deep enough, backtrack history, and find the root causal source? Maybe they don’t have the time, ok. True. Have you noticed how they avoid making judgments in news reports that are controversial or cause conflict to the status quo? They just support that narrative though…

Why don’t they actually talk about all information regarding global climate change science if they are indeed doing as they purport: to represent both sides? They are failing to represent truth in reality by omitting real evidence because it goes against the status quo being projected for everyone to accept as a reality.

In the news programs, the news presenter or reporter is allegedly impartial, neutral, presenting both sides of the information, except when it’s to uphold the status quo narrative that keeps people entrenched into a false perception of reality.

When they do present both sides, that means truth and lies are mixed in through a representation of both sides, which can’t both be true if they indeed conflict or contradict. So we need to judge for ourselves, but many of us don’t. We accept the information being streamed into our consciousness.

If you present both sides blindly, in attempt to be neutral, “balanced” and “fair”, then you aren’t presenting truth, you are only presenting information with no determination of what is actually happening. Even if multiple sources conflict, they just present both sides. Sometimes they do investigative stories and explain things honestly, true. Those are few and far between nowadays, compared to the pre-internet journalism and media.

The news (and Wikipedia) don’t present reality or truth that can actually be discerned. They present information about anything that has a source that has authority in the eyes of others to get it accepted as “reality”. Or the one presenting the information knows otherwise, yet still projects it into other people’s consciousness for them to accept a false version of reality as “reality”.

Some people do try to offer a presentation of information honestly. But it can be false in many cases because they are trapped in the current condition and normalized acceptability of the standard narrative fed by institutions and political mouthpieces, like the Whitehorse and President. Then people gobble it up under that fallacious appeal to authority and experts or personal political attachment that has them favor one side over the other almost all the time.

“He’s the president, he wouldn’t lie. Obama is great. Clinton is great. Bush was bad. Trump is bad.”

The news ends up just being a selective information dump, where they tell you things and claim they are telling you the “real” news not the “fake” news. But then the another format is used as well, where they present information that conflicts, leaving it up to us to be confused if we don’t investigate ourselves.

Sure, there can be a lack of information, and they just present information as it comes in. That’s understandable. But there is still a lack of real judgment about the actual real reality of the situation. So the viewer or reader is left gather more information on their, but then they don’t.

We have become lazy and complacent in our collection of information, instead choosing to be fed what to be believe. That is easier to do, and requires less effort, time, energy and thinking.

People will often judge information, not critically, but emotionally. To judge based on what they want, desire or prefer to be true, rather than investigating to find out what is true.

The news admits they do investigations in some work called ‘investigative reporting’, while in the majority of reports, they don’t investigate, they just report, i.e. repeat information without investigation. And that information often comes from establishment sources that uphold the standard false perception of reality.

In one sense, this reporting of both sides is a positive, because of how blindly trusting people are of the news. If the news only told one version (the accepted mainstream version) and told people something was a certain way, and it wasn’t, most would believe it anyways.

So when they present so-called “balanced” information, or one-sided status quo confirming narratives, we need to recognize that we have the capacity within us (or to develop that capacity) to be able to discern the contradictory information and determine what is a more accurate representation of reality, based on reality itself — not how the information makes us feel, or how much we want, wish or desire it to be true.

It’s understandable that it takes time to investigate, so normally most of the news is busy just reporting what is happening. Sometimes it’s just what is happening, and there isn’t much to argue or debate about, but often times there is one side that is true, and another that is false. Sometimes both sides can be wrong, or both sides can also be misrepresented by reporting information “as is” when they receive it.

And if it’s just reporting or regurgitating information that complies with the standard mainstream narrative, then it’s not “real” news about reality, it’s real and unreal news, since they are not vetting it, they are only reporting information (true or false), not investigating it.

No wonder people are left confused by the media, yet think they have a congruent, integrated understanding of reality as their worldview.

Double-think was aptly noticed by George Orwell. People hold contradictory information that is used at their convenience to justify certain positions, yet they never integrate these contradictions to notice them as such, and correct their misconceptions.

source
Why does any of this matter?

The importance of truth to determine the quality and condition of our lives. If your default position is to just present all “points of view” or “perspectives” and leave it at that, as if it’s simply “everyone has their own opinion”, you get nowhere and people remain confused and in contradiction internally. But also in contradiction with others because everyone is in their own false internal perception of reality without the common objective reality to unite them in truth.

This is what ignorance does. It keep us uninformed about the territory of reality, where we’re unable to truly relate on that common basis and get on the same page of understanding about issues honestly.

To ignore the conflict, not care for truth, and just believe whatever the fuck we want, is not a solution for humanity or the world. If we want truth, we need to get down to the definition of terms that are used to reference reality, so we can establish a common grounding in reality to define what we are talking about. Then we can reflect back onto reality to prove a truth in existence.

So in the end we are sharing information, and trying to get down to the reality of things as they are in are. We can present information to people who are wrong. Eventually the person who is wrong will either: 1) see they are wrong by it being demonstrated to them; 2) not be interested in learning, and they will remain in denial, ignorance and rejection of reality even when it is demonstrated from the ground up. At that point, it’s time to walk away and not waste your time on someone who doesn’t want to learn to see their errors. Time is precious. Go spend your time and attention on those who are more receptive to learning.

The mainstream media presents us with information. They do investigative reporting, and regurgitation of the status quo falsity, but we each need to discern what is happening ourselves.

If we don’t… then we get “1984” and accept what the “authorities” and “experts” tell us about “reality”, as they allegedly “watch over” us and “guard” us… 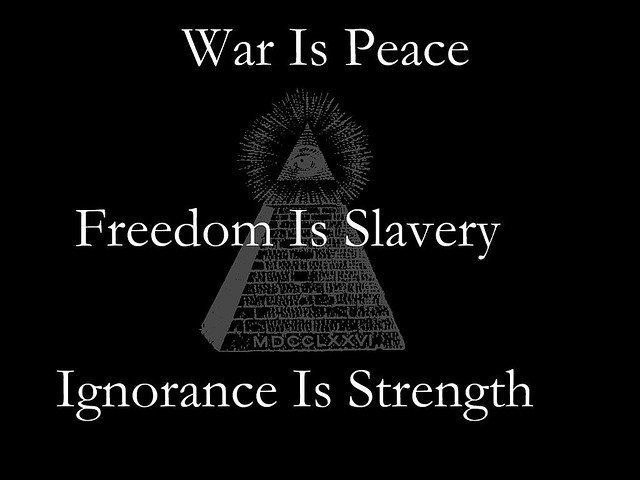