What is the Trivium Method?

The Trivium Method is a methodology of learning how to learn and learning how to think. It is like other methodologies for learning about reality, such as the scientific method. Trivium means three paths or ways, or the place where three roads meet.

The 3 Paths of the Trivium

Three paths meet to become the Trivium Method that accurately models how we think and learn. The 3 paths can be described through different models of three. The Classical Trivium model is General Grammar, Formal Logic and Classical Rhetoric. This can also be represented as Knowledge, Understanding and Wisdom; Input, Processing and Output; or Ontology, Epistemology and Ethics.

The positions in each model refer to the same aspect of the trinity, such that the Trivium Method can be looked at as following these three steps, each having words symbols that represent what is happening.

Grammar (the who, what, where, when)

Grammar is the “art” of inventing and combining symbols. General grammar is the medium used for communication, like phonetics for combining sounds, spelling for combining letters, and grammar for combining words. Establishing norms ensures a correct form of communication for all to understand, such as the definition of words for everyone to agree upon its meaning. Something is perceived (in objective reality or subjective imagination), and it is given a “name” through a word symbol to communicate about it.

Logic is the “art” of thinking. Various things perceived are corresponded and correlated, linked and connected to combine into larger order concepts or constructs upon which to understand existence. Logic assists in directing actions through non-contradictory identification. Thinking is correct by being in equilibrium with reality in order to arrive at various truths. Logic is used to learn and know more about those things first perceived with grammar. To get to the deeper substance of what it means; to validate and verify the definition and identity. Logic includes the law of non-contradiction and law of identity.

Rhetoric is the “art” of communication. The last part of the Trivium uses both former aspects to communicate about those things previously perceived. Logic is the “art of arts”, but rhetoric is the “master art” that culminates in the ability to effectively communicate with grammar and logic. Rhetoric has a negative meaning as well, where it can mean manipulation and deception to simply “win” an argument through sophistry or other cunning linguistic arts so as to convince someone of something without much regard for the truth of the matter. This master art can be used for good or ill will.

We input knowledge (grammar) and process it, analyze it, filter it for contradictions (logic) to gain more understanding, then this gives us the wisdom of how to act so that we can wisely output into the world (rhetoric). Three paths feedback within ourselves and with others. The product of proper thinking is the objective truth, that any can verify with their own thinking. 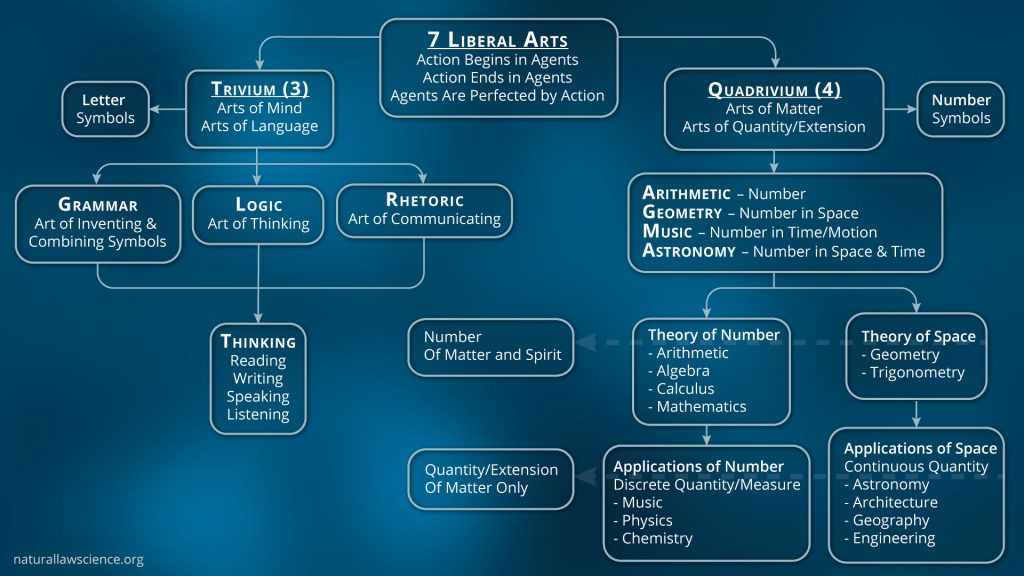 We all feedback into the common external objective reality (existence), while individually processing what we input through our senses in our own internal subjective reality (consciousness). This is how we co-create the human world that exists as a result of our actions.

Thinking is important, it’s involved in reading, writing, speaking and listening. The quality of what we read in, will affect what we think about, and possibly what we output in writing or speech. Garbage in, garbage out, as they say. The quality of the information we take in (metaphysics), and the quality of our thinking (epistemology), will guide us in the moral quality of higher, truer, realer life (ethics) we can create.

By learning about the Trivium Methodology, we learn how to think, not what to think. Standards of proper definition of terms to establish a common ground of knowledge can then be followed by critical thinking skills to correct errors in thinking, like fallacies and biases. This can be applied in any endeavour to learn or communicate. Communication gets us to the common ground of understanding something. We “come to terms” by defining the words/terms we use in order to understand each other better.

We can better understand problems or opportunities by critically defining them, and then work to creatively envision a solution or exploit. Rather than automatically accept or reject ideas based on prejudices or preconceptions, we analyze them first to determine their validity.

The Trivium Method represents the natural order of effective thinking. It’s how our psychological lives work. This is a basic functionality of higher order consciousness that human animals possess. The degree of functionality in this Trivium Method of thinking and processing reality can be developed further. We walk these three paths in consciousness in order to live. Understanding how we function — and further developing our capacities of consciousness — will benefit us not only individually, but collectively as well. With the Trivium Method we can understand more about the “arts” of mind and language.