The Love Between Homeless People and their Animal Companions 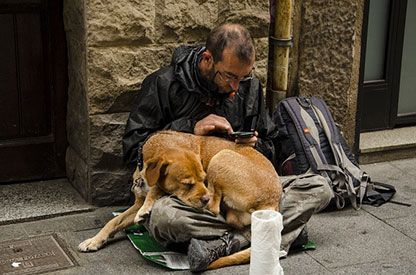 In my own work on morality I have discovered it’s intimate connection with the psychological dimension of animal existence. How we treat others, all others, not just human animals but all animals, is a reflection of our psychological development in moral comprehension.

I have made posts about the emotional lives of animals that we connect to and value. Nohuman animals can provide an emotional connection like a human can and help to make people feel better. Animal companions have improved the quality of life of many people.

Homeless humans are a subset of our society that go ignored, and many nonhuman animals share that homelessness and isolation of being ignored too. Both humans and nonhumans are neglected and shunned by the rest of society at large. 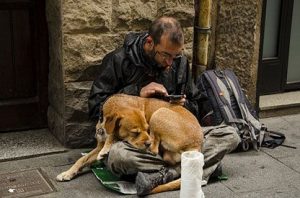 As they say, “dogs are a aman’s best friend”, and this is demonstrated in the art activist project My Dog is My Home that shows the redeeming care and love between homeless people and their dog friends.

They ask us all:

Is it four walls?

Or can it be built in the heart of a loved one?

What if that heart belonged to someone with four paws?

This elucidates the saying of “home is where the ‘heart’ is”. Also, it doesn’t need to be a cat or dog with paws. It can be pigs or cows with hooves (you can find youtube videos). Human and nonhuman animals of various kinds can connect on an inter-species level and share emotional experiences. A relationship can develop between nonhuman animals of different species as well.

There are probably better videos if you want to search for them. There is even a case where the connection made by an large cat predator animal with a baby animal it would normally have killed. And they remained friends. I think the cat even stopped following the lower consciousness predator behavior in favor of the higher consciousness connection to another being it developed (caring to not harm it). I think it may have died from starvation due to it’s new mindset. But it shows the power of the psychological dimension and connection to others.

But back to the homeless people and animals.

Homeless people aren’t looked upon favorably, and seeing a homeless person with an animal creates different reactions for different people. Some of us might think “should a homeless person even be allowed to care for an animal?”, maybe for the sake of the person’s own survival, or maybe for the animal being better off somewhere else while ignoring the person in the same situation. We can be more sympathetic, empathetic and compassionate for the the animal but not the person. However, some might instead see the two forsaken lives together and want to help both of them.

We often want to transform the lives of others, but don’t know how. The simplest thing to do is give money to try to help those less fortunate. It’s estimated 3.5 million people in the US experience homelessness each year, not that they remain homeless the whole time or afterwards. The estimates also say 1/4 of the homeless are also taking care of animals.

The My Dog is My Home project interviewed people who have or continue to suffer, not only from homelessness itself, but also from violence, mental illness or inadequate healthcare. Yet, despite all of that they’ll brighten up with positive emotions when they are sharing the story of their beloved animal companions. Whereas they would have continued to feel a lack of love and safety alone, their friendship with our fellow animal brethren has allowed them to feel loved and safe again.

The bond developed with their dogs is so strong that they don’t accept housing that doesn’t allow animals, and they even give up food for themselves so that their nonhuman friend can eat instead. 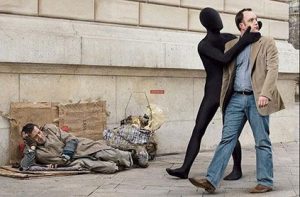 Many people villainize the homeless, while most of us ignore them. I recently watched a movie with Richard Gere called “The Dinner” which dealt with teenagers that burned a homeless woman alive and filmed it while laughing. For some reason some people don’t see the humanity in homeless people. But when a nonhuman animal has this mutual relationship where they also care for human, then it shows another who does care for a homeless person, and they aren’t even human. This expresses the humanity of homeless people, that they aren’t simply disposable. Maybe people can start to recognize the humanity of the homeless, instead of just saying “get a job you bum”.

Here is the exhibit for man named SPIRIT and his babies (his dogs), as they mean everything to him and he means everything to them.

My Dog Is My Home – SPIRIT

Victoria Lawson, author of the article on multispecies poverty and politics in LA, said:

“We need to start to think critically about how we understand ‘the other’; seeing homeless people as flawed and inadequate allows us to see ourselves as stable and good.”

In order to get more homeless shelters, subsidizing to accept pets in housing, to make it affordable and to tackle mental health care, the majority of people will need to understand issues of poverty and homelessness better. Knowing that their lives are full of love can potentially help many people connect with them better.

Here are some former posts I did on the human-nonhuman animal connection: