Confusion is the second phase of Fear that leads to Chaos in the Natural Law Expressions chart made by Mark Passio. Confusion follows Ignorance. 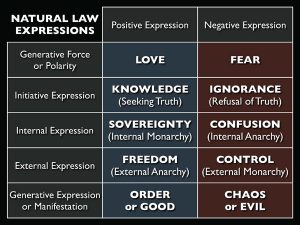 Words create our secondary reality, reality level 2 (level 1 is manifested reality, level 2 is perceptual understanding of reality/life). They define how we conceive of what is around us. Manipulate words, and you manipulate the mind and reality perception. If someone does not understand the proper meaning and definition of a conceptual word symbol, that will create confusion with respect to an aspect of reality. This confusion creates disorder and disharmony from Truth, towards chaos in one’s life however great or small relative to the importance of the particular word symbol. An example is a semantic misunderstanding that creates a disparity in understanding and communicating reality, leading to confusion and conflict in those who cannot resolve their confusion with Truth. Those who cannot find the Truth to resolve their confusion may end up in conflict in trying to control their cognitive dissonance and reality to conform to their erroneous conceptions. Reality negotiation takes place and they reframe the reality in conformity with their existing self-image and worldview to maintain the self-delusion and unreality.

A basic example is of a lecture being given by someone who uses a word many are not familiar with. At that point, the introduction of that word of grammar that people did not understand tripped them up and prevented them from continuing to properly understand the lecture being presented. They develop confusion and frustration from this ignorance.

Other concepts are built from previous concepts, and the lack of definition in the previous foundational concepts will create an inability to understand later ones properly. Hence, confusion develops, and ultimately chaos in the internal framework of understanding reality, because a term used to create a conceptual framework is not known properly, or not known at all.

Seek Truth. Understand the true meaning and definition of words, they shape our conceptual understanding of reality and can be used for mind control.