There is a commonality in many sci-fi films, where these futurist visions all have humanity building and progressing further upwards in order to deal with expanding populations, which resulted in the construction of super-mega cities compared to our current large cities.

Traffic is everywhere, not just at ground level. Cars are at all levels of living in high rises. No respite from the traffic.

Look at the rooms for living in your personal space, as portrayed in the 5th Element.

That’s the view from outside the single window in the room/apartment. Probably a 10×5 foot room or something.

It’s so small with no freedom to have much in your place. Can’t afford a larger place, locked in small space for all personal existence (apart from existing mostly out of your room I suppose). Your personal space is severely limited is the point. You only get the bare space needed to fit the amenities for survival.

But likely as a direct result of flooding of the shoreline which created the restriction of space.

The rooms are larger than in the 5th Element, and they come with neat technology to recolor and decorate the room in many dynamic ways according to whoever is currently staying in the room.

At first you start off with a drab looking room:

Then you get a nifty gadget that customizes the appearance of the room to your liking. You just point and click for changes to happen:

Are all of these technological titillations enough to keep people accepting of the vertical promotion and horizontal constriction of human life? Is that the price to pay for living in a city where economic opportunities lay?

Another movie is Total Recall (2012), where cities are built in layers, with an upper and lower layer.

The apartments for the main characters was pretty standard, so this movie didn’t too much restrict personal living space compared to the 5th Element.

The T.V. show Doctor Who (2005) also had an episode (Gridlock) envisioning such a future for humanity as well, with multiple layers of a city. The upper management city was long dead with everything automated in futile movement with no end in sight. Freeways and highways that lasted for years and years to get from one location to the other. 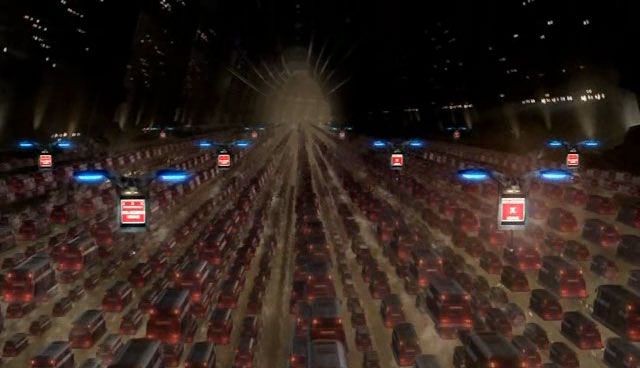 No one flew around to other lanes in fear of the centralized authority and consequences from illegal movement. So some people were there for generations, even having children in their vehicles, always waiting on the highway to move closer to their destination.

Oblivion (2012) also has a scene of a New York with buildings covered by a new ground level. These buildings are uniform in height, and nearly the same height as the Empire State Building. It seems that future was also sky-reaching.

So I ask humanity: is this affinity for vertical building the best thing for humanity’s future? Is this only a consequence of a failure to envision alternative and possibly better modalities of living on this planet? Are we being limited in our future potential due to technological restrictions?

I see this conclusion to forever build up, as a consequence and failure to re-evaluate the current path and condition of life we live. Can it change? Will we change our ways for the better rather than continue to do the same thing while adopting half-measures (expansion) that delay the inevitable requirement to change our way of life to prosper on a limited resource planet? Or do we just plan on dominating all of the universe for infinity? When is enough, enough?

The mindset seems to be of continuous ever-increasing expansion and domination on the finite world we live on. This is not a rational or sustainable course to take. When will we realize we need to change our behavior on this planet?

No wonder humanity gets symbolized as a virus in movies like the Matrix… lol.

Is the epitome of human civilization symbolized by further sky-reaching sky-scraping buildings? It seems to have been the marvel in past centuries that whenever a feat of higher building was attained, it garnered much respect from the world (ooo-ahhh). Those who come from more “primitive” societies and have not seen sky-scrapers are marveled at the sites at modern metropolises.

Why are bigger higher erected structures the apparent culmination of human civilization? Could it be related to the subconscious male infatuation with erected power and the phallic worship of ancient civilizations? Who ever has the biggest penis is the best?

Domination is name of the “game” that so many support, we just euphemise and obfuscate what is really going on in the world… When are we going to learn about the problems of our myopic dominating mindset? It manifests itself in so many ways in human history… Learn from mistakes or keep repeating them, albeit possibly in different forms.

We need to take charge of our own destiny as individuals, not relegate our future to tacitly continue to accept the status quo and continue to be led into a future we may not like all because we didn’t want to get involved in the present and look forward to what future we were going to create.