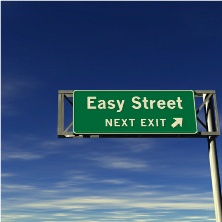 Effort. Much in life takes effort. And much of the time, we make choices based on what we think will require the least effort and resistance, not necessarily what is the best choice to make in itself.

Whatever is more challenging is often seen as less appealing.

A study published in eLife suggests the brain calculates the cost of effort for various options which influences the behavior we ultimately choose to do. Not only that, but it even affects our perception. The higher the cost to act, the less we pay attention to that option and no longer even see it. 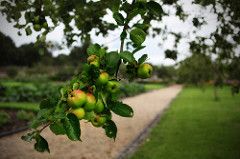 The lowest hanging and easiest to grab fruit requires the least effort, and we won’t even bother looking at the rest so essentially we don’t even see the rest. We think the lowest hanging fruit is the best to choose.

In the study, 52 people took a series of tests involving a cloud of moving dots. They were asked to judge whether the cloud was moving left or right by moving a handle in the desired direction. But when the researchers added a resisting load to one of the directions, the participants became biased and tended to shift their judgments in avoidance of responding in the direction with the most resistance which requires the most effort.

This means that even if the cloud of dots was moving left, but the resistance weight was applied towards the left handle, people were more likely to judge that the dots were moving towards the right because it was easier for them to choose that direction.

Even more bizarre about this bias is that when the participants were asked to verbally respond with an answer for the movement, they were still answering with a tendency to avoid choosing the direction that had the most effort required. The brain changed how they interpreted the visual input to influence their behavior into choosing the path which required the least effort. And this is all happening automatically.

The results of the research suggests that the traditional view of the motor system is incorrect, where it’s an output process that only expresses our decisions based on what we see without actually influencing the decision. The motor response seems to feedback and report the effort required to actualize a decision into an action and will influence whether the choice we make is actually what is represented in reality. So rather than report the actual movement as it is, the brain is fooling itself into an incorrect answer in order to choose the easiest option. The research also suggests that people will be less likely to see the world a certain way if certain behavior is more effortful.

Changing behavior is a difficult thing to do. Many of us have addictions to various things, such as smoking, food, alcohol, drugs, or whatever else. Changing our behavior is something that requires more effort than continuing to do what we already have been doing. Instead of changing our behavior towards what we know is better, we often choose to keep doing what is easier and not change. This influences us to not even see or consider changing our behavior anymore since it’s already determined to be too much work compared to the “better” easier option of not changing. Our choices become seen in a more limited or nonexistent (i.e. not seen) way.

The easier path isn’t always the best. Sometimes the best path is the hardest with the most effort required.