‘Safetyism’ and Political Correctness on the Loose

Political correctness has become more absurd in the past few years. But this year tops the cake. The protests are showing how much the mindset of some lefties needing a “safe spaces” has even turned on the left. Political and other discourse is being derailed by cries of defining oppositional speakers as bigots and racists when they aren’t. 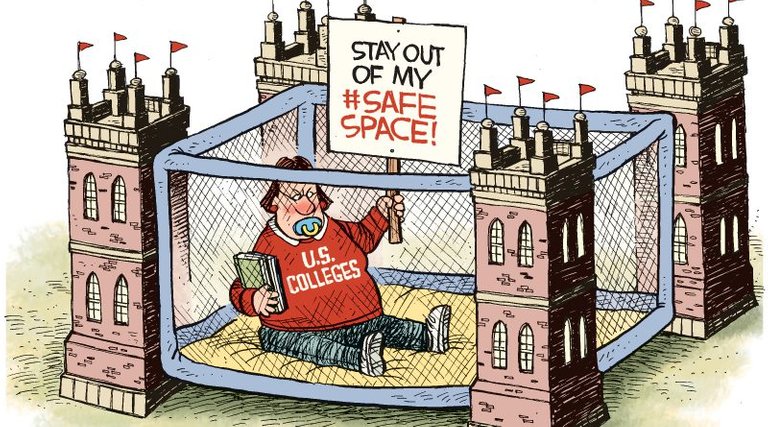 This has started in college and university campuses, but it has been spreading like wildfire.

A popular incident occurred at the New York Times. An op-ed by Sen. Tom Cotton (R–Ark.) claimed that its publication threatened the lives of it’ black employees. This is pretty ridiculous. Expressing an unpopular opinion got him threats, and ultimately the New York Times fired opinion page chief James Bennet who let the piece run. Can’t have any opinions out there that contradict others, or object to the riots.

Another incident is the UCLA suspension of lecturer Gordon Klein. Students who didn’t want to do their studies, and instead protest, asked for exemptions from the final exam, to boost grades, but only for blacks. That racial discrimination. He refused, and wrote a letter to make fun of their demands basically, saying he wouldn’t give preferential exam treatment to students because of their skin color. Yet, UCLA is “investigating” him for “racial discrimination”. Another retarded example of what’s happening with the assault on critical thinking in society.

Yet another example is niversity of Chicago economist Harald Uhlig. Daring to oppose the radical demands of some of the protesters had him receive calls to resign as editor of the school’s Journal of Political Economy. Again from the PC-leftist New York times, several columnists urged “the University of Chicago, which is the publisher of the Journal of Political Economy, to review Uhlig’s performance and suitability to continue as editor.” No trace of racism could be found to incriminate, but that doesn’t matter.

A leftist Intercept journalist Lee Fang was also a target and denounced as a racist and publicly shamed by a colleague. What did he do? Daring to interview a black protester who criticized violent tactics. The colleague received 30,000 likes and 5,00 retweets for calling him a racist, when he isn’t.

People don’t care what’s true anymore. They just want to punish people for disagreeing with their sacred ideologies that are basically bullshit because they can’t stand up to opposition. This is the world we are living in now. This is the type of thinking that is being supported by many in the public, in so-called “academia” and in the media. Contrary opinions or facts don’t matter. The “safe spaces” of people who don’t want to let others speak and contradict their worldview is what matters.