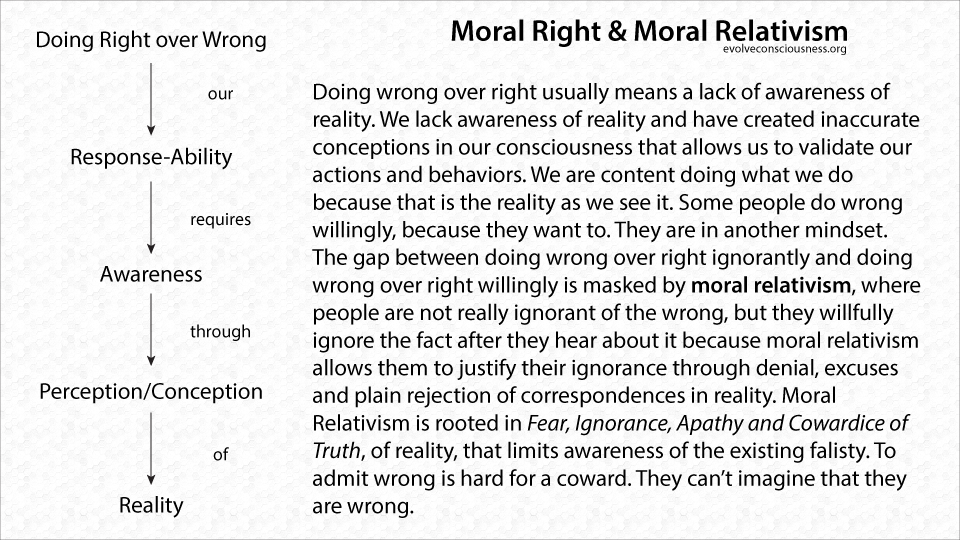 Doing Right over Wrong, is our Response-Ability, which requires Awareness, through Perception/Conception, of Reality.

Doing wrong over right usually means a lack of awareness of reality. We lack awareness of reality and have created inaccurate conceptions in our consciousness that allows us to validate our actions and behaviors. We are content doing what we do because that is the reality as we see it. Some people do wrong willingly, because they want to. They are in another mindset. The gap between doing wrong over right ignorantly and doing wrong over right willingly is masked by moral relativism, where people are not really ignorant of the wrong, but they willfully ignore the fact after they hear about it because moral relativism allows them to justify their ignorance through denial, excuses and plain rejection of correspondences in reality. Moral Relativism is rooted in Fear, Ignorance, Apathy and Cowardice of Truth, of reality, that limits awareness of the existing falisty. To admit wrong is hard for a coward. They can’t imagine that they are wrong.