“At Least I’m Doing Something!” 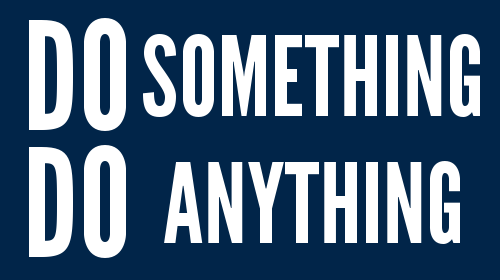 There is something going on, and something needs to be done about it. Sometimes you can’t do anything to solve a problem. But someone decides to do something, even though it’s irrational and non productive to the actual problem at hand.

They could do nothing, but they can’t stand doing nothing, because they want the problem or situation resolved. So instead of doing nothing, they do something. Then you tell them, “you know, what you’re doing isn’t going to solve the problem”. Or you explain how what they are doing is not going to do anything about the problem, and they are just wasting their time and energy on a fruitless endeavor.

We want to be in control of a situation we can’t control. Rather than to figure it out, or waiting for the problem to be resolved when it’s outside of our control, we want to exercise any amount of control we can. We confuse motion with progress.

Let’s say you and someone else is stuck in an elevator because the power went out. You call some people to find out the number of the building and find out the power is out on the block. You just have to wait it out. You can do things to pass the time, but you can’t get out. But you need to get to an important meeting. So do you just wait for the power to be reestablished, or try to break open the button panel and mess around with the wires?

Someone says that what you’re doing is pointless and won’t get the elevator moving, and might even make things worse when the power comes on. But you get upset about being told you are doing something useless, inefficient, incorrect or wrong, and reply with “at least I’m doing something about it!”

We don’t seem to like being told we are doing something pointless. We want to believe that what we are doing has meaning or value, that is serves a real purpose. This applies beyond a situation where we need something to happen that is out of our control.

People play video games and lose a lot of time doing so. There is only a limited amount of time in life, and putting your time, attention and energy into something that is pointless in the long term, is not something many want to accept. I’ve spent a lot of time gaming in my earlier life. A lot. It passed the time. It was enjoyable. It was an escape from finding something more meaningful, purposeful and valuable.

But in the end, I had to think about how much of my life I was wasting away. I thought of how useless gaming was in the long term of my life. When I was old, would I look back on my life and see that the time I spent gaming gave me value and meaning throughout and towards the end of my life? No. It would just be something that sucked up my time and gave me nothing in return of significant value in my overall life.

In regards to doing something, we’re also quite attached and somewhat “obsessed” with “doing” things. Many people want to be doing things often. They’re are busy going from one thing to the next, with hardly any breathing room. With all the focus on “doing”, where is the time for “being”?

We don’t change ourselves from within, the way we think or perceive the world, and so we’re not empowered to change the world. We’re chasing doing things, but not things that help us understand the larger problems in order to do something about it.

Things are messed up in the world. We feel a lot of pressure in our own lives as well, stress from work and with all the things we keep ourselves busy doing. We seek an escape. We do fun things, or we veg out, like in front of the TV or playing games. If we want things to change, to change the effects, we need to change the cause. To change the “doings” in the world, we have to change the “being” of individuals.

Doing something isn’t necessarily better than doing nothing. When there are problems, we can’t just be “doing” things for the sake of doing things. We need to understand why something is happening, and focus on the root causal source to change for the effects to change. Most of the time that requires us or others to change internally in the way we think or see things. When we understand what we need to do to change the cause, then we can do something and get the results/effects we want.