In making decisions, there is a balance between the speed we arrive at a decision and the degree of accuracy with which that decision will give us what we expected.

This is called the speed-accuracy trade-off, where hasty decisions tend to be suboptimal than slower deliberate decisions. 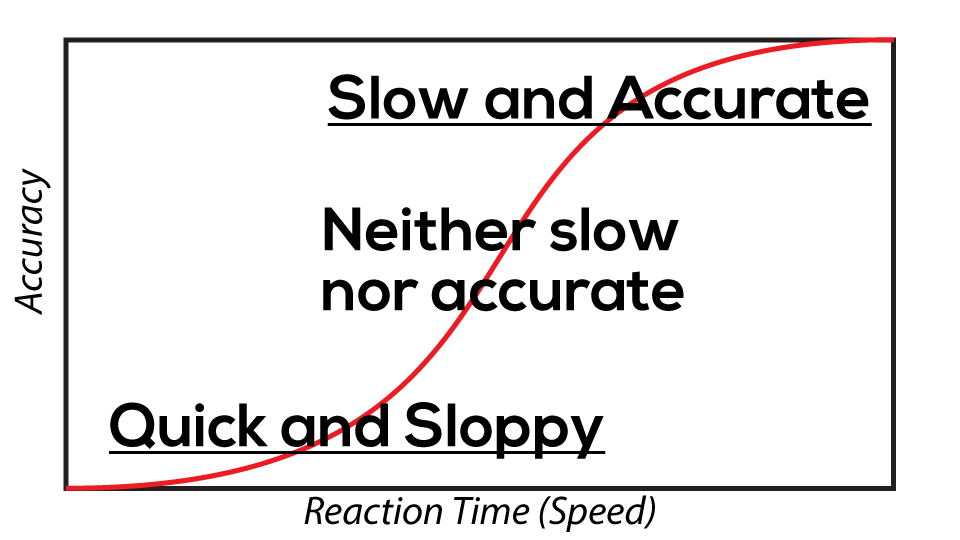 This is important across the animal kingdom, from rats, to nonhuman primates and humans ourselves. It’s crucial for intelligent agents to be able to balance the demands of both speed and accuracy to get what they want.

For example, we might want to plan for a trip, and make sure we pick the best destination, yet not really care how much time it takes us to get there. Alternatively, on our lunch break we have a limited amount of time so we want to quickly choose between the various menu options for us to eat so that we can get back to work on time. Making a decision for something we want, and to be sure in the accuracy of our decision, varies depending on the context in our lives. We must constantly balance how quick we want to make a decision, and how accurate we want to be about it.

Speed-accuracy adjustments can be done through an increase or decrease in the ‘decision threshold’. The decision threshold is what defines when the continuous accumulation of information processing should stop, and when the best option with the strongest evidence is chosen.

Recent research by the University of Oxford has found two processes in the brain that determine how quick we make a choice, how much information we need to accurately do so. The study, published in eLife, looked into developing a greater understanding of the intricacies of our brain in order to possibly develop better treatments for neurological disorders, such as Parkinson’s disease.

Prior studies have looked into the speed-accuracy trade-off, and located a general area that plays a key role in decision-making, called the subthalamic nucleus region. Peter Brown, one of the scientists, said he and his team wanted to measure the exact location and timing of electrical activity. This data would then be compared with the behavior someone exhibited while a decision-making task was being undertaken.

To do this, the team at Oxford study the reaction time of 11 Parkinson’s patients in one group, and 18 healthy individuals in another group. Both groups were asked to determine if a cloud of moving dots was moving to the left or to the right. The task difficulty was increased by increasing the number of dots that moved in one direction. Each participant was given a random set of instructions to make a choice based on speed or accuracy.

As might be expected, the ability for individuals to make decisions more quickly was when the task was easier with less information to process and less contradiction overall, whereby most of the dots were moving in a single direction. This was when they were told to focus on making a quick decision as well. Conversely, participants made more errors when they spent more time trying to be more accurate, when they were instructed to focus on making a more accurate decision as opposed to a quick decision. 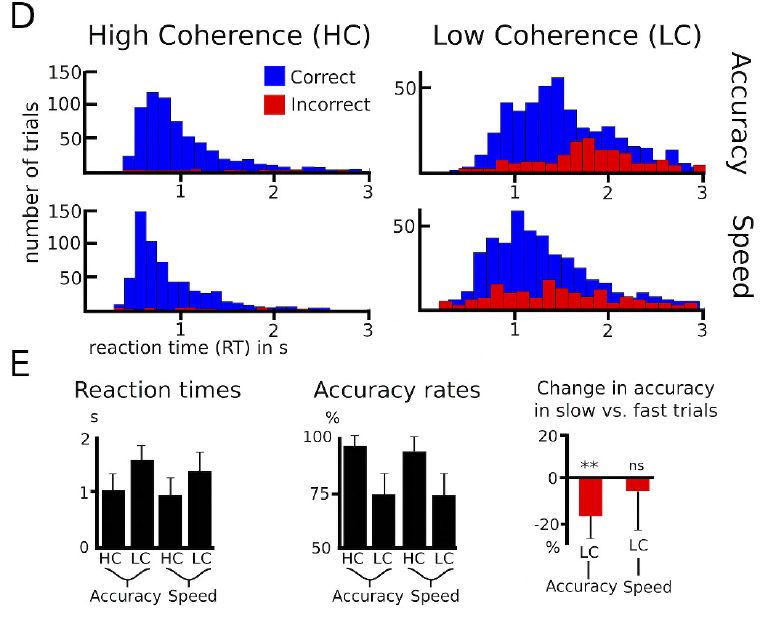 Haste in picking choices more quickly is inversely correlated with the caution to make sure we choose more accurately. Fast decisions come at the cost of reduced accuracy.

Using computational modeling, researchers saw that it takes longer for the brain to accumulate the necessary information on difficult tasks in order to reach a critical threshold of having enough information, and then judging it with a degree of certainty to evaluate the accuracy of a choice in order to finally make a decision on one choice over another.

Activity in the subthalamic nucleus is hard to measure since it’s deep inside the brain, but recent Parkinson’s patients who underwent surgery provided a way to get better data from that area through deep brain stimulation. Switching between fast and cautious decision making tasks shows a change in activity in the subthalamic nucleus. These changes also predicted how much information was acquired before a choice was committed to. 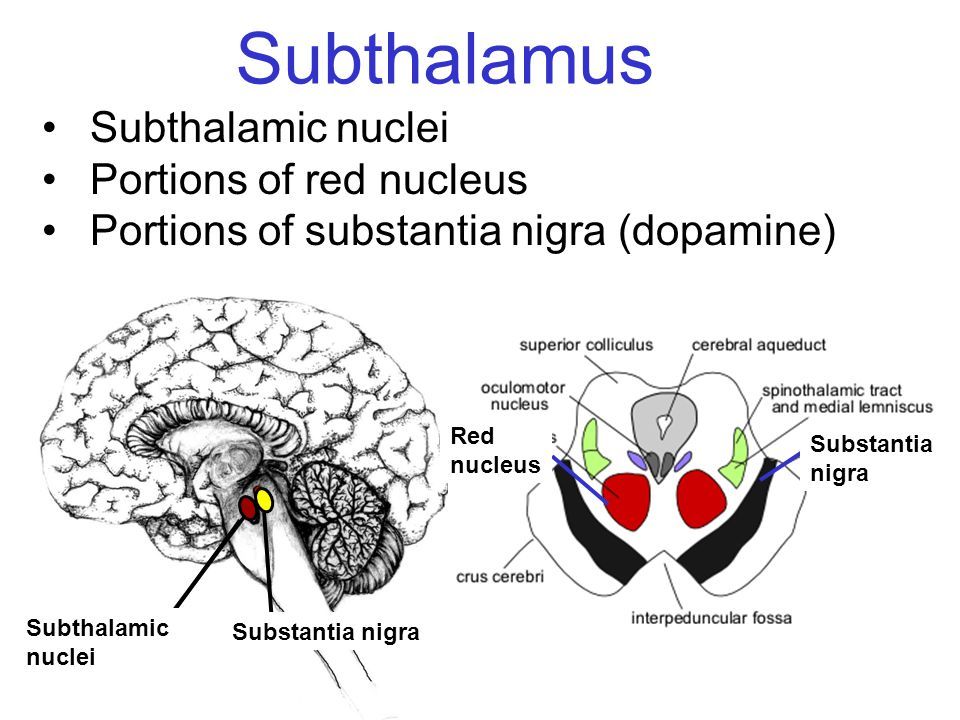 Measuring the electrical activity of groups of nerve cells within the subthalamic region, researchers were able to determine there are two distinct neural networks that differ in how they respond to tasks:

The study confirms once again that the prefrontal cortex of the brain contributes to decision-making, and now more specifically in these two key ways of a speed vs. accuracy balance and trade-off.

The reason this relates to Parkinson’s disease, is because the scientists identified changes in activity in one of these areas (in the prefrontal region of the brain), with movement control. The close relationship of these neural networks (of decision-making and movement) could mean there is a common signal that’s responsible for how quickly someone will make a decision to move their body a certain way, and the resulting movement that happens.

As you might know, Parkinson’s disease affects the central nervous system, specifically the motor system. It’s a long-term degenerative disorder that increases slowly over time, with visible symptoms of shaking, rigidity, slowness of movement and difficulty walking. Eventually, thinking and behavior problems can occur, such as depression, anxiety, sleep and emotional problems, and also dementia.

The scientists hope that a better understanding of these various neuronal mechanisms and networks responsible for making decisions and the movements that result, will lead to focused therapeutic interventions on those specific neural circuits in order to treat various neurological disorders. 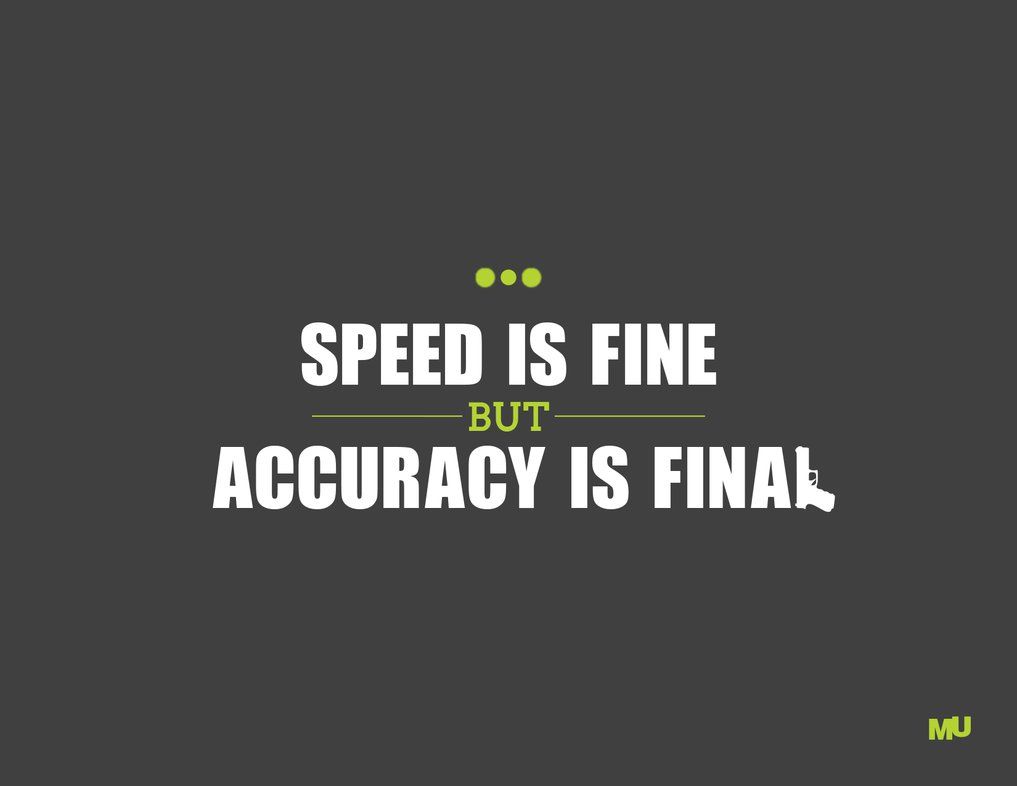 Depending on what we need to do, we will be trading off how accurate and certain we are about a decision compared to how quick and we are choose it. The more information there is while we a focused on making an accurate decision, the longer is will take to arrive at a ‘decision threshold’ to decide.

Also, the more contradictory the information is, the longer it will take to discern it and come to a judgment on what is being represented by that information for us to make a choice about.

Sacrificing time to make a choice can lead us to make less optimal and even wrong choices because the time to take in information, learn, process it, and understand it, is not being done.

As I have said many time before, truth takes time.

However, sometimes decisions aren’t that important for us to take the time to decide what is “optimal” for us in that moment, such as what is optimal for us to eat according to our taste buds, for example.

But in general, some tasks and decision need more information before going forward. A failure to take the time required to find an answer will tend to result in an increased likelihood of making errors and arriving and less accurate and less optimal decision or choice in life. 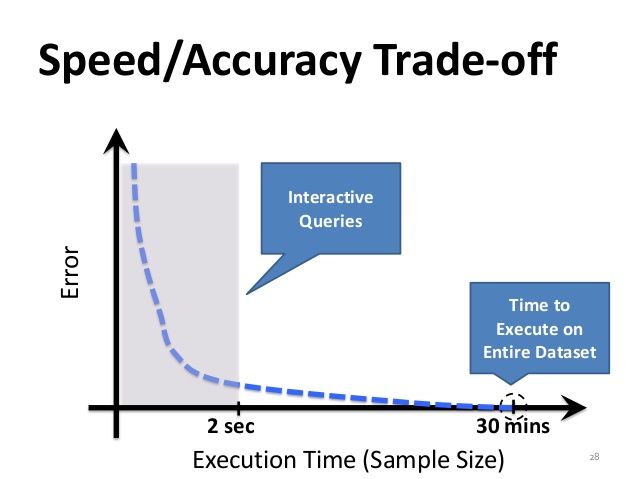