‘Balance’ Isn’t What It’s ‘All About’ – Don’t Balance Right with Wrong, Good with Evil

“Balance” implicitly refers to an equalization, an evening out, a middle ground, not more of one or the other but having things be equal. To balance yourself on a beam is to not fall over to the left or right, but to stay in the middle, equally centered.

“an even distribution of weight enabling someone or something to remain upright and steady.”
“a condition in which different elements are equal or in the correct proportions.” 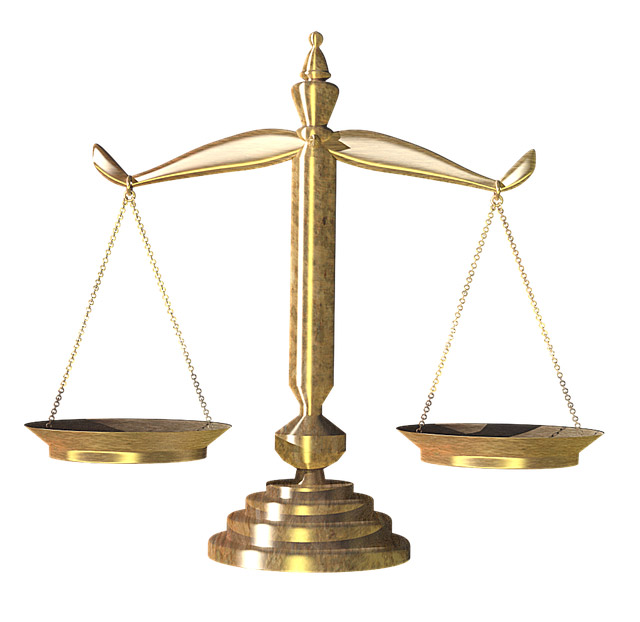 The problem is when simply stating “it’s all about balance”, it simply means all, everything, to “balance everything”. As if “all” things need to be balanced and brought to the middle; not sometimes choosing one over the other; not putting more weight, value or importance in one polarity or the other. Just be “balanced” and follow a “middle-path” towards everything, making them even and equal.

On a scale, you can indeed balance two things equally if they weigh the same, but if they don’t weigh the same then the balance shows which one weighs more as a proportion or ratio of the other, and it’s not an equal balance. Scales and balancing can show if two things are equally measured, but that’s not to say everything should be brought to equal measure.

In life, there are things that matter more, that have more weight, value and importance inherently. Truth and falsity, and right and wrong, are examples of what not to equally balance or go to the middle ground with.

To balance out right and wrong or good and evil in our actions is foolish thinking. It’s not always “balance” that is what “it’s all about”. There can be the dissolution or disintegration of one polarity towards more actualization of the other. The proportion or ratio of right to wrong that we do — or good to evil that we do — should not be 1:1, 2:1, or 5:1. The goal is not to have proportions of how much right to wrong we do. The goal is to be at no proportion or ratio, where we don’t do wrongs. There is no imaginary “balance sheet” where we can keep doing wrongs to others so long as we do “good” deeds in other parts of our lives…

How to we work towards that goal of removing the wrong or falsity in our lives?

Truth is a synonym for reality and existence, the universe. All that is gets put into the universal grouping concept of “the Truth”. Truth and moral truth are one way, non-contradictory, and don’t unite with their opposite or falsity or immorality. 1+1=2 can’t unite with 1+1=3. It’s contradictory.

Similarly, not stealing from some people but stealing from others doesn’t make for a real cohesive and united moral way of living, but rather a disunited, disharmonious and contradictory state of being. True moral ways don’t unite with false moral ways, as they are incompatible. People who deny the justness or legitimacy of murder, rape, etc. do not want to unite with those who support those wrong-doings.

You don’t unite falsity with truth, or obfuscation with clarity. The absence of clarity can tend to create obfuscation of what is really there, and also leads to confusion rather than true understanding. This can lead to chaotic behavior in attempts to make sense of reality while still lacking the clarity to see what is really happening.

For example, due to a lack of understand our world, many people champion centralized authoritarian systems of rulers to rule over everyone else, playing dichotomous games of voting for others to solve our problems for us. When one party doesn’t work out for us, the majority votes in the others party, and back and forth we swing in an infinite pendulum, stuck in a false dichotomy for our way of life.

Removing one polarity of falsity we accept or believe to be “true” will provide us with more clarity to see a truth we previously ignored or overlooked. Rather than not being able to see it due accepting falsity, now we can see it. Removing falsity and the negative manifestations of behavior (like immorality) is where the balancing — of what is more important; of what weights more in our lives; and of what is of greater value — can happen. So long as falsities, obfuscations or confusions are accepted, they will prevent acceptance of greater truths, clarity and vision of what to do. 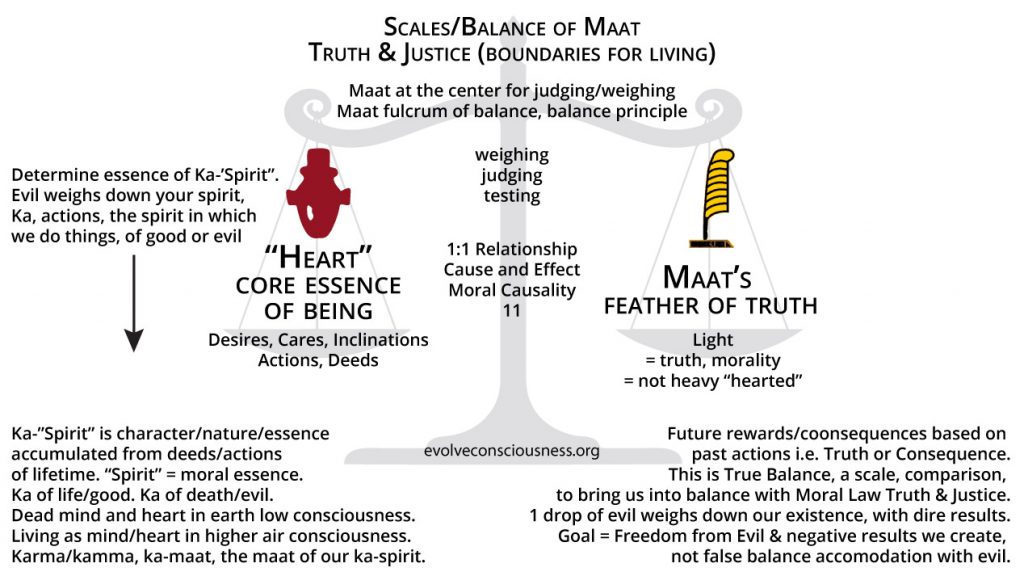 We can also balance our knowledge of truth and falsity, good and evil, right and wrong. This is to know the difference between good and evil, right and wrong, truth and falsity, so as to not fall for evil, wrong or falsity in our lives and the way we live it. With the knowledge and understanding gained, we can balance ourselves (actions, deeds, desires) against the feather of truth and see if we measure up to various truths (like moral truth), and then change our behavior in accordance to “revive”, “rebirth” or “resurrect” ourselves into better versions of who we can be.

In terms of the implicit balance, middle, equal, unity, etc., there are indeed valid aspects of life where this can be applied. We can balance and bring unity to our expressions of consciousness, to balance the “mind and heart” or the “left” and “right-brain”; thought, emotion and action; and the body (action), mind (thought) and “soul” (emotion). There is unity of “dualities” or “opposites” that need to be complements to each other forming a unified whole (“mind/heart”, “left/right” brain); and the unity of multiple categories like the trinity of thought, emotion and action that will also complement each other when unified. We unite and are “balanced” based in non-contradiction of our own capacities, where what we think, feel and do is not conflicting or contradicting. 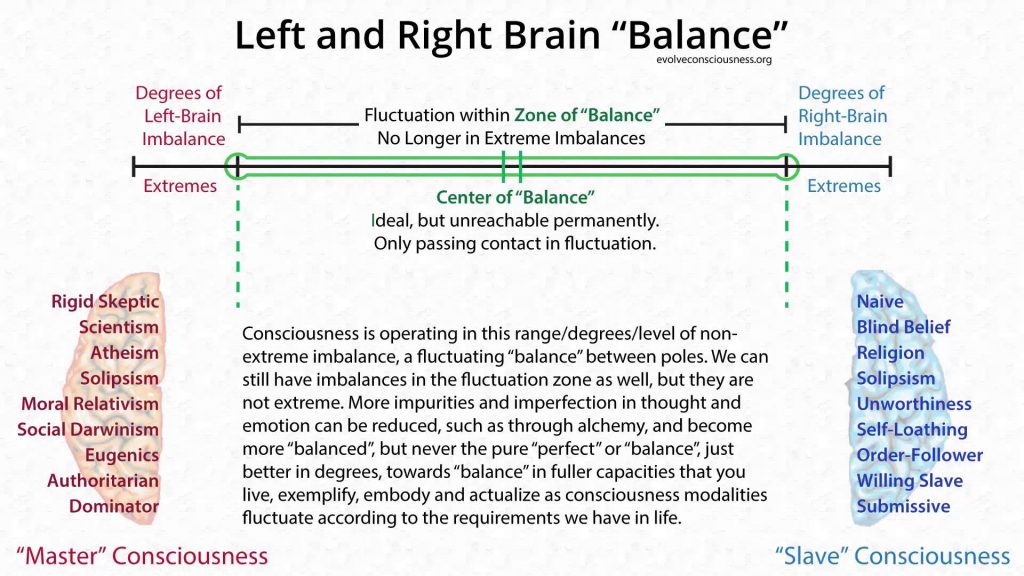 It’s not a “perfect” or fixed static middle or balance when some opposites are united (like left and right-brain thinking), but a fluctuating dynamic use of the capacities we have within us. Rejecting certain capacities in consciousness — like someone who is more “left” or “right” brain thinking/being that rejects the opposite — comes from not understanding who we are.

Of course certain people may have more propensity or aptitude at using certain functionality of consciousness. We have similar or different personality types compared to others, but we all have a near infinite potential within us. We all have consciousness that has the same capabilities at the core, but we all grow up different, engage in things differently, and gain different knowledge and experiences to shape us into who we are and what consciousness functionalities we develop more of.

Some of these capacities in consciousness within us need to be used and developed for greater harmonious unity within ourselves. It leads to creating and manifesting actions in the world that better reflect an understanding of what shouldn’t be created into existence, like wrong-actions that may seem right. Being more emotional and denying logical critical processing can lead people to be manipulated more easily and believe something wrong is “right”; while being more logical and denying the significance of emotional salience and feeling harms/wrongs can lead to justifying wrongs and manipulating people. In either case, wrong-actions result from not being a more fully developed being that uses complimentary capacities to navigate life.

We balance our modalities of consciousness — “left-right” brain, “mind-heart”, thought-emotion-action — in order to be unified in ourselves, and this allows us to be more balanced and aligned with truth, right, good, etc. That’s how we get in an “upright” position of “balance”.