The Checkerboard Floor: Walk in the Path and Way of Good, Evil, or Both

There is a ladder with grades and levels to get off the checkerboard floor, the low, base, beastly, carnal, fleshly consciousness stuck in the pleasure trap and baser instincts, evolving towards a higher ego, a higher self, a higher consciousness, a higher soul.

Consciousness, self, soul, ego are references to ourselves. Some people try to make the ego itself an enemy, trying to kill their ego, as if they could kill themselves. But in a sense, yes, we are our own worst enemy. Consciousness is a double edged sword. The self is dual aspects. The ego has dual aspects. These are terms to talk about ourselves in different ways. All of these terms refer to us, about things within us, not externalized outside of ourselves existing somewhere else, and the power is within us to learn about ourselves and change ourselves. 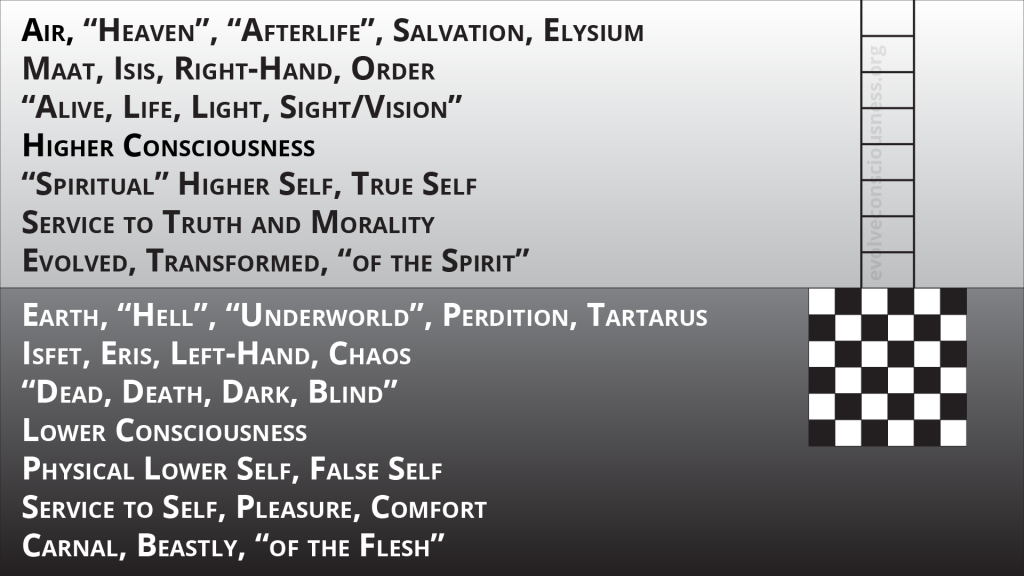 The Ladder to Higher Consciousness

This is higher consciousness, a “spiritual” higher self, the true self.

It’s not some higher thing somewhere else, some true things somewhere else, these are aspects of ourselves in a dualistic capacity to align with the dualistic poles of either truth or falsity, morality or immorality, good or evil. If you align with the true one, you embody, actualize, individuate and realize your self as a more fuller representation in alignment with truth, as opposed to alignment with falsity which makes you more of a false self. When you align more with truth and let go of the falsity, you become more of a true self.

Service to truth and morality as being evolved, transformed, and “of the ‘Spirit'”. This is where we are climbing the ladder.

The Floor in Lower Consciousness

When you climb off of that board, you’re no longer stuck in that confusion of mistaking good is evil and evil is good. Now you have clarity of understanding and are working towards more alignment with truth and morality and casting off the falsity that has you creating evil instead of good.

This is lower consciousness, of being in a physical lower self, a falser self, with focus on service to ourselves, our personal live and our physical sensory pleasures and comfort, the carnal, beastly, “of the flesh” focus. We are not concerned about truth and morality, so whatever is “true” for us, whatever is “good” for us subjectively, personally, not objectively with respect to ourselves and others together. It’s about service to ourselves in pleasure and comfort, which is what most people in the world are focused on. This is where the often biblical or spiritual symbolism of being carnal, beastly and “of the flesh” comes in.

Of the spirit is the higher consciousness, and of the flesh is lower consciousness where your attached to your body and the pleasure you can derive. There is little concern for objective morality, therefore you are more amoral, animalistic, carnal, beastly, fleshly low based consciousness. 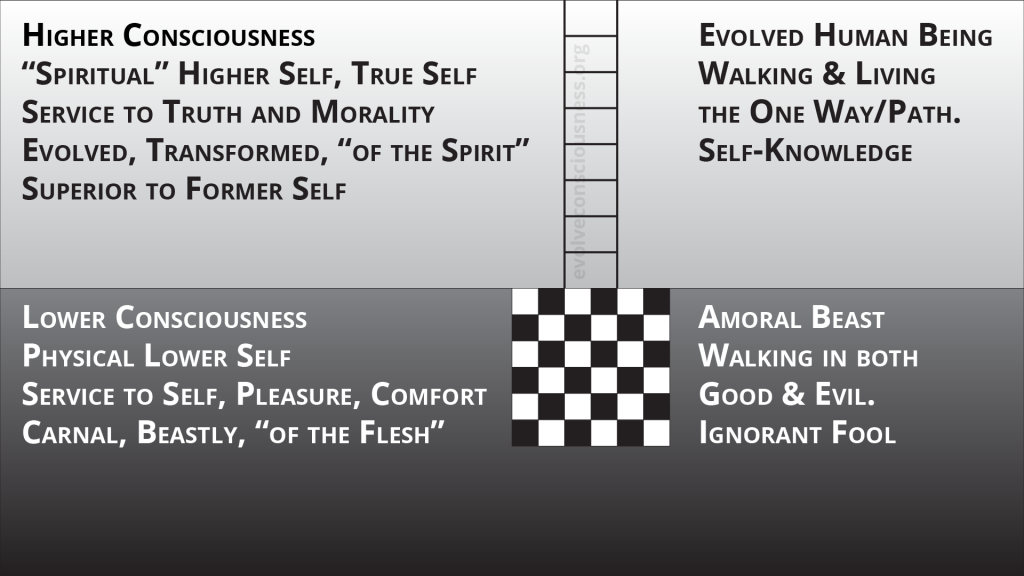 Superior just means higher in position, upper, above. That’s why truth and morality is the way and path to being superior, as we rise above and over our former ways of living and above the way of living of others who don’t evolve higher in moral actualization. Someone is taller is superior in height. Someone who is faster is superior in speed. Someone who is superior in some quality has more of it that others. We can be superior to others in some respects, and they can be superior to us in others. The quality that matters most in morality, as that determines the quality and condition of the way of life for everyone. Some people are where they are morally, and that’s just how it is.

We are relatively more or less moral, superior or inferior, when we look at the levels of moral attainment each person is actualizing. This is the reality of each person being where they are. The potential is to rise above and become better, and people can choose to do so by seeking greater truth and moral comprehension, or ignore that path to elevate, evolve and transform themselves to higher consciousness living through morality.

We can become more evolved as human beings. We can choose to walk and live more in the one way and path of moral truth. This is self-knowledge at the deepest level. Self-knowledge is moral knowledge. Moral comprehension and moral living comes from within, from ourselves externalizing moral behavior by comprehending moral principles internally. Morality comes from us internally by reflecting upon external behavior.

If there are no beings capable of recognizing the concept of morality, and choosing to willfully generate and manifest behavior through the willful force of consciousness based in morality instead of immorality, then there is no morality being created because there is no one to create that behavior nor to recognize that behavior as such. It all comes from us. We need to stop externalizing our power and realize the power comes from within. It comes consciousness, self, soul ego. Morality or immorality, good or evil.

How do we get to being and evolved true human being? That’s self-knowledge, walking the one way and path through service to truth and morality. That’s where we become a higher, truer and realer self. We do this by understanding moral truth more objectively with ourselves and others inclusively, as opposed to subjectively based on our own personal whims, wants our desires. We bring truth and morality into ourselves more and more.

Symbolism has been placed in ancient traditions and myths in an exoteric surface level story which encodes the more important esoteric knowledge about truth and morality. The many stories and narratives encodes this most pivotal information to create a heaven on earth. What truly deeply matters more than understanding ourselves and how to create a better life for all and live morally are not? Actual knowledge and conscious awareness on how to evolve consciousness within the polarity of truth and morality will help us create better quality conditions for ourselves and others.

Even if the stories and narratives have a literal component, it doesn’t really matter in terms of our potential and ability to create a better lives for ourselves, here and now, and into the future. But the priest and political classes have used stories and narratives in their literal sense in order to make people feel good and when them over through inculcating and inducing beliefs into their consciousness.

Believing in an afterlife, a life after death, and doing what the powers and authority tell you to do in order to attain a life somewhere else that’s allegedly so much better, is quite enticing and gives people feel-good meaning and value, despite being a fantasy of belief. The ruler operates as the hand of “God” and everyone has to do the same, or do what they say, in order to get into the afterlife.

It’s all a mind fuck. Believing in the fantasy as literal stories is fooling ourselves as we don’t see the deeper symbolism. The symbolism of the truer, deeper, realer meaning gets lost in the literality of a story, narrative or mythology.

The ladder is the knowledge of good and evil that allows us to choose how to be, how to live, what to do, as opposed to ignorantly doing both. The whole checkerboard itself is ignorance, where we’re walking in the dualistic, amoral, carnal, beastly, fleshly path of doing both by not being concerned about morality. This is how animals in the animal kingdom that we belong to operate for the most part, doing things just to survive and following basic drive and motivations. We can recognize our higher potential and choose to live differently.