Pearl Harbor 75th Anniversary and Commemoration is Dec. 7th – But… Why Did It Really Happen?

Looking into WWII, you can find some secrets that have been kept hidden to keep the benevolent image of the allied forces. One is how Pearl Harbor could have been hit with such total blinding surprise.

Are things really as they seem?

Either some people were totally asleep that day, or some people higher up wanted it to happen for certain reasons. 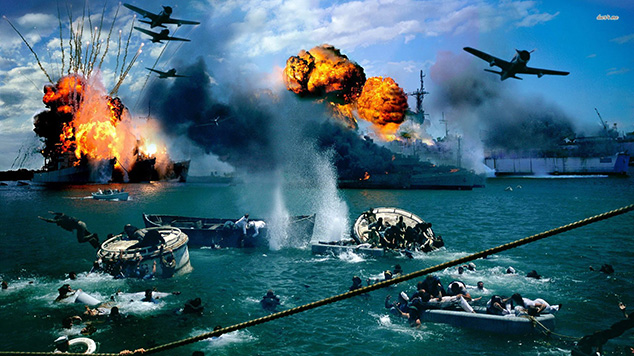 source
This justification for a Pearl Harbor incident to enter a war or change foreign policy was uttered by the dastardly neo-cons that assumed positions of power prior to and subsequently after the 9/11 attacks. These people shaped a lot of policy for the US government, and are part of the globalist, Fabian socialist, CFR agenda to reshape the world. A bunch of neoons laid out what they wanted in a document called “Rebuilding America’s Defenses (RAD)” by their think tank “Project for the New American Century (PNAC)”.

The powers that be, want to transform the world into a globalized one world order managed by a centralized governmental body:

“Further, the process of transformation, even if it brings revolutionary change, is likely to be a long one, absent some catastrophic and catalyzing event – like a new Pearl Harbor.”
– PNAC

They didn’t want to wait for some slow transformation. They wanted a catalyzing revolutionary event to happen that would serve to change the world landscape. They got it with 9/11, either by letting it happen, helping it happen, or making it happen, is specifically unclear.

There is evidence that 9/11 was allowed to happen by members of this neocon cabal, like Dick Cheney. The original Pearl Harbor, was also carried out in the same fashion: by allowing it to happen. 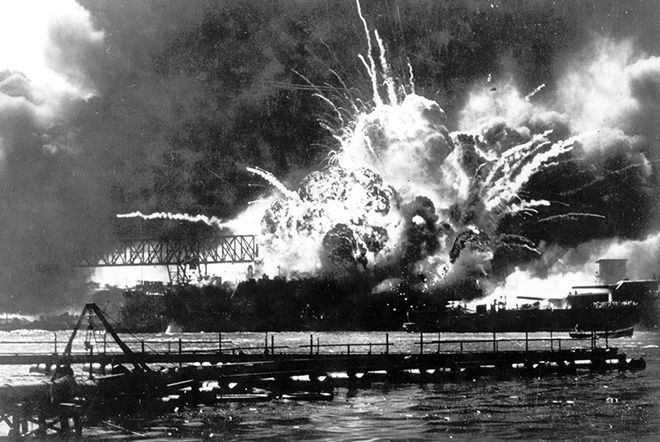 source
Getting attacked, people dying, enraged a populace, and they demand retribution and call for war. It happened with 9/11. We saw it. This also happened in 1941, on December 7th, when Pearl Harbor was allowed to be attacked.

Now it’s glottalization and democracy, the American Empire that wants to conquer and expand. Before that was the British Empire. And before that you had the Ottoman Empire, Byzantine Empire and Roman Empires, and before that the Greek, Assyrian and Babylonian Empires, and on and on it goes. People always go crazy with power and try to reshape the whole world by violent force.

Japan didn’t attack America for no reason. The US presidency had been impeding Japan in competition for resources.

In WWII, people were still looking to expand and attain resources, like had been done before. We are still in wars for resources right now. Everyone wanted resources.

The US also wanted resources in the Pacific area. Having demonstrated and gained much power on the world stage since WWI, the US Congress thought it wise to restrict business with Japan to hurt them economically. All Japanese assets in the US were frozen.

source
The US moved it’s Pacific fleet from California to Hawaii in 1939, putting pressure on approaching Japans area.

These are like standard explanations for the build up of tension and eventual attack. You won’t get historians arguing about this very much. But this is not the whole story.

After WWI, no one really wanted a war, at least not the people who fought, bled and lost much during those times. Some people know the real horror of wars. Ask General Smedley Butler:

“War is just a racket. A racket is best described, I believe, as something that is not what it seems to the majority of people. Only a small inside group knows what it is about. It is conducted for the benefit of the very few at the expense of the masses.”
– Smedley Butler

source
President Franklin D. Roosevelt, the president at the time, was worried about the US being superseded as a world power player if Germany would defeat Britain and France. FDR wanted to prevent Germany from doing that, and if possible, better to emerge as the biggest baddest power player of them all as the winner. This would also help with empire-expansion, as I covered earlier being a part of all growing empires corrupted power players who desire more power through expanding their reach and grasp of what they control.

We are still trying to grasp power and control of resources in nature like oil and land, but also, we haven’t gotten over trying to control the animal resources we think are simply property objects for us to own. And still for some they see the human animals as a resource to continue to be tapped and exploited. If not through outright slavery and domination as has been done in centuries past, we now have clever sophisticated word magic and mind control narratives creating false realities to live in. We are willing slaves, who love our servitude, acting as universal constructors, and liking our positions as cogs in the machine.

But enough of that rant, but to the topic of Pearl Harbor and WWII. 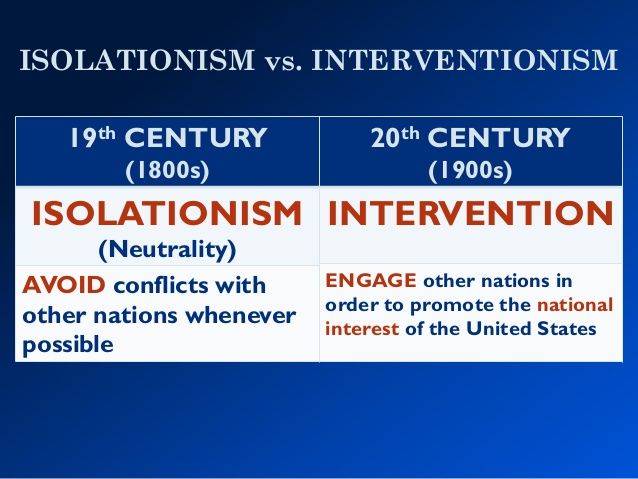 source
WWII is the origin point of all the micro-wars afterwards, where the US foreign policy changed from that of non-interventionism or isolationism, to a direct intervention in areas of the world that they saw an interest in having a part of. 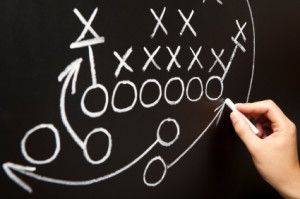 Hand drawing a game strategy with white chalk on a blackboard.

The US went from defense, to offense. I have mentioned it before in another post, how the OSS become the CIA. How the NSA was created after WWII. And the main point, of how the Department of War which literally said what it was about, was renamed into an Orwellian Department of Defense. What’s hilarious, is that the Department of War was less warring, and the US was more defensive than offensive. Then with the Orwellian trick switch, the US became more warring, yet put up the appearance of “defense”. Amazing social engineering at work.

So, to get to a war, and beat Japan, while the US population didn’t want anything to do with it, FDR needed a little “sacrifice”. After all, it’s for the “greater good”, right? The US needed to get involved in the war for it’s own good, and the people needed to be pushed into it.

Looking back above to the reasons the standard historians agree upon, the US is shown to have been putting pressure on Japan in obvious ways to get them to attack. And then they did. Case closed? Nope.

Japan attacks. OK. But then, the US can defend itself from an attack. It’s not a sitting duck. After all, the whole fleet from California was moved to Pearl Harbor. What the hell happened?

This is where the “historians” want to deny other information, like a “fakenews” cry, and the revisionist historians face a lot of flack and an uphill battle to change the minds of those entrenched in the establishment narrative of events. This applies to many other aspects of WWII, and of history in general.

The US had intercepted the Japanese code to attack. Yet, they withheld it from propagating throughout the command structure to advise the commands int he Pacific to do something about what was coming.

In short, this means the US government, in some capacity, some people, somewhere, let the Pearl Harbor attack happen, after first instigating pressure and wanting them to attack.

This can be read more in the book “Day of Deceit: The Truth About FDR and Pearl Harbor” 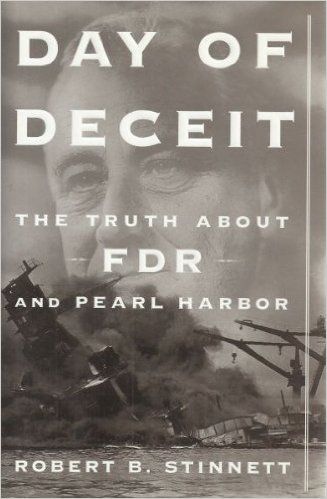 This book has more to reveal, though.

Lt. Cmdr. Arthur H. McCollum as born to Baptist missionary parents in Nagasaki and well versed in Japanese language and culture, decoded and passed Japanese reports onto Washington from 1940 to 1941. He believed a war was inevitable, and that provoking a war to suit US interests would be best. He saw 8 steps, including: US Fleet close to Hawaiian islands; pressure the Dutch to refuse Japanese economic considerations, like oil; joining the British and others in an economic and trade embargo against Japan.

This was all implemented by the US government. Confrontation was the way they would get into the war, and seem like the “innocent” “victims” who did nothing to provoke it, acting like they didn’t want it while it’s what they wanted the whole time.

Another “blunder”, or so-called, was people being absent or unprepared on that one specific day out of the whole year, because it’s what happened on 9/11 as well. Coincidence, yes they coincide it similarity, but random and not engineered? Not likely. On 9/11, safety drills were running and many people were “away”, and people were unprepared for a real attack. It was like the specific day was magically “picked” by the “terrorists” to be the prefect day, as if they knew all the information happening in multiple areas of the US government, like the info came form them. Well, for Pearl Harbor, the same is true. Key officials were away and busy, unable to be reached to give orders for how to respond.

FDR may have done great for America in the war, and subsequently, that is not in question. Someone’s actions need to be taken in the full light of reality, not only their good deeds. And don’t forget, doing good deeds doesn’t wash away the wrong. The ends don’t justify the means. Killing someone from your family who doesn’t want to go to war, in order to get your family to attack a waring neighbor, is not really a sane thing to do in my book.

The author of the aforementioned book, however, sympathizes with FDR: “I sympathize with the agonizing dilemma faced by President Roosevelt. He was forced to find circuitous means to persuade an isolationist America to join in a fight for freedom.”

source
But, there are also reports that Britain, Netherlands, Australia, Peru, Korea and the USSR had warned that a surprise attack was coming on Pearl Harbor. In the end, all warning and messages were blackballed and not propagated to produce a response int he military and prevent the surprise attack. Congress fell for the ploy and went into war, with only one person, a Ms. Rankin, objecting out of the whole House and Senate: 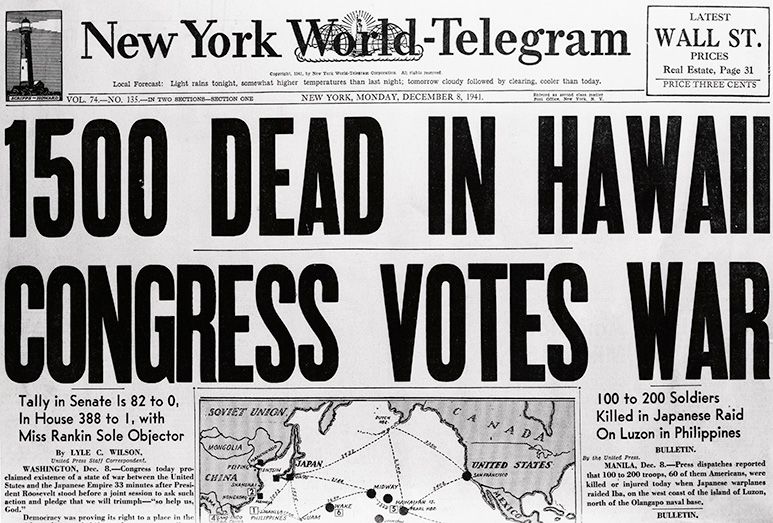 source
One final note, apart from the FDR angle and letting this happen, there is more to WWII and WWI that tie them together, and the bankers and money interests behind both wars. As Smedley Butler talks about the profiteering, this is one of the main reasons for war and the drive for war by some people. It’s a big business. Eisenhower and Kennedy both tried to warn us about the military industrial complex and hidden hands of power, as I have previously posted on.

And also, this attack can be used later, as a seemingly justified reason for payback on Japan with not only one, but 2 nuclear bombs, as I recently talked about.

In retrospect for Japan, their attack was a huge mistake. It would have been better to target the oil supplies, crippling the future energy supplies, rather than sink or damage 18 ships and destroying 118 planes. The US rebounded from that minor hit with fury and went on to annihilate two defenseless cities with nukes to send a message to Japan and the world.

The macho-man might-makes-right attitude still pervades much of society in the 21st century. It’s not only on the world stage, but in common life where people don’t think, yet believe they can muscle their way to get people to do things. We need to evolve consciousness and think better if we are going to progress as a species.