Contrary to the widely held belief in the one-sided efficacy and safety of vaccines, they aren’t safe for everyone, at all times. There is a risk. Like getting the virus you are being supposedly protected from, or being paralyzed.

You can find admission from high level “authoritative” organizations about such issues, from time to time. But they are ignored by the mainstream media. One such case was recently admitted by the WHO on September 1, 2020. They admitted the outbreak of a polio virus that was created by the polio vaccine being funded by the Gates Foundation.

On 9 August 2020, the Federal Ministry of Health, Sudan notified WHO of the detection of a circulating vaccine-derived poliovirus type 2 (cVDPV2) in the country. According to the notification, the virus is genetically-linked with Chad (sequencing results showed 12 to 19 nucleotide changes). Two Acute Flaccid Paralysis (AFP) cases were notified. The first case, a child of 48 months, had onset of paralysis on 7 March 2020 and was from Sulbi city of Kas locality in South Darfur state. The state is in the west of the country, bordering Central African Republic, South Sudan and close to the border with Chad. The second case, a child of 36 months, had onset of paralysis on 1 April 2020 and was from Shari city of AI Gedarif locality in Gedarif state in the east, close to the border with Eritrea and Ethiopia. Both children received the their last bOPV ( type 1 & 3) dose in 2019. Initial investigation indicates these cases are linked to cVDPV2s from the CHA-NDJ-1 emergence group which was first detected in October 2019 and is currently circulating in Chad and Cameroon. Eleven additional suspected cases have also been confirmed as cVDPV2 and field investigation reports are being consolidated. These cases are in the following states – Red Sea, West Darfur, East Darfur, White Nile, River Nile and Gezira. Hence, between 9 August and 26 August 2020, there have been a total of 13 cVDPV2 cases reported. Additionally, three cVDPV2-positive environmental samples from Soba, Elgoz and Hawasha sites from Khartoum were detected (samples collected on 29 March 2020). Sequencing of viruses isolated in Sudan so far reflects that the viruses are related with viruses reported earlier in neighboring Chad from where there were multiple separate introductions into Sudan from Chad. There is local circulation in Sudan and continued sharing of transmission with Chad. 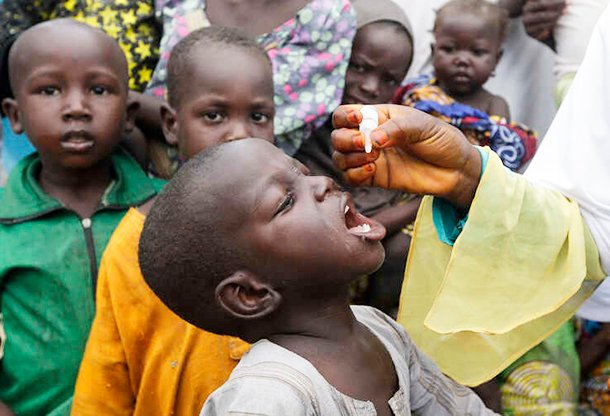 What you will hear about, is how proud the WHO and organizations that push vaccines are for supposedly eradicating something like polio. But then when the end up creating polio in people being vaccinated, they aren’t making as much noise about it. The vaccine fable must persist in order to keep people believing they are totally safe.

After all, the WHO sees vaccine hesitancy as a major issue, and even has a top 10 list of so-called “Vaccine deniers” that dare to give people facts and data to show that vaccines aren’t as safe as the establishment wants people to believe.

In Africa, innocents is betrayed, as children and their parents believe they are being treated fro something life-saving, only to see their lives ruined. The attempt to stop the wild polio has taken a wrong turn as the live-vaccine polio vaccine is causing the spread of the polio virus and paralyzing children.

Even with the first polio vaccine in the West, the virus was already on the downturn and “dying” out when they introduced the vaccine. It wasn’t responsible for eradicating the polio virus. Nature took it’s course.

Convinced the vaccine is the only reason, the vaccine has been pushed elsewhere. This includes Africa, India Pakistan and Iran. They have all been hit with vaccine-derived outbreaks of the virus. In 2019, Ethopia has wasn’t having it and destroyed 57,000 vials of type 2 oral polio vaccine (mOPV2) after an outbreak occurred there.

The Gates Foundation is proud to be part of the Global Polio Eradication Initiative (GPEI) that is pushing the oral polio vaccine. They give out unsafe vaccines, and the virus spread in the environment to infect more people by contaminated water. These issues need to be presented to parents before they accept vaccines on behalf of their children. Informed consent is required, not tacit ignorant consent of telling people they need to take X to save their child from something deadly, while the X has issues of it’s own.