The recent protests developed from the continued police brutality and aggression. The case of George Floyd is yet again another police action that led to manslaughter. 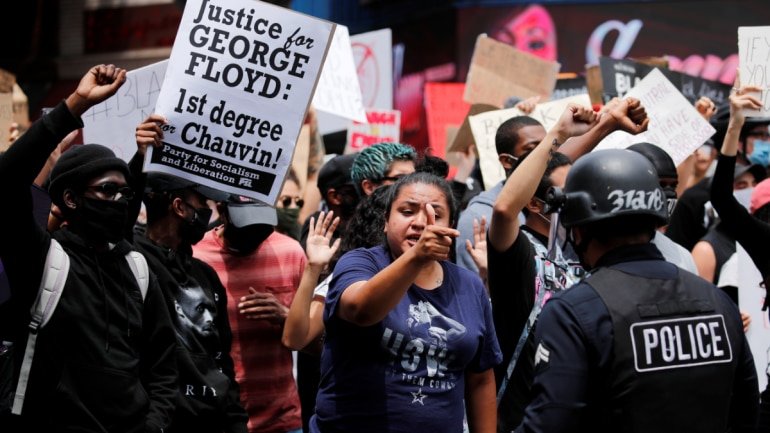 Source
Police behavior needs to be held accountable, but it hardly ever is. Cops do something wrong, and they hardly get a slap on the wrist. The same would have happened to the pig who killed Floyd, were it not for protests. At first, he was only fired. No charges were to be laid.

As the protests turned to riots, charges were to be brought forth against the killer cop. The protests were righteous. They sought justice. People have enough of being bullied by authoritarians who think they can do what they want and get away with it.

There is also the psychological and physical coercion from government due to their overblown reaction to COVID-19. People were ready to rally around a cause and voice their protest against the authorities.

But soon after the protests started, riots developed. There is evidence of instigation from agent provocateurs who could have turned to protests into riots. Many were all too willing to go along with it, like Antifa aggressors are prone to do.

Antifa was even caught spray painting “BLM” onto buildings to paint BLM as vandalizers. Black people caught them and told them to stop.

It continued as stacks of bricks are placed in the street to welcome the aggression of rioters. Stores and cars are vandalized and broken into. Things are stolen. Fires are set. The message for justice has been erased as the message of violence is pushed forth.

The rioters killed the focus of the non-violent protests to get justice and reform of the authoritarians. The rioters are giving government the excuse to crack down on the populace and impose control and more violence against the people.

It’s problem, reaction, solution. Create a riot. People react against the violence and want the government to stop it. The government says ok, you rioters force us to exercise more control now, here we come.

Trump has initiated an end to riots and lawlessness by bringing in the military and live fire rounds. That’s more violence in the streets. The rioters only made things worse. And the media stokes the flames of racial divides. The real divide is between people and the authoritarians who think they have more rights than others, be they police or other government employees.

The voice of the real protesters is dead. Curfews are being enacted to silence activity. Marital law follows. No more protests. Reform is gone. Change is gone. The result is more authority, more control and more violence against free people.

Antifa is shit, but now Trump has designated them a “terrorist group”. How long before any other “group” of people get labeled terrorists. Protesters will become “domestic terrorists” under the deluded eyes of the government. While the real terrorists are the police who shoot up innocent people in cars and raid their homes and murder them while they sleep. Government is the head terrorist that coerces us and has us live under constant duress if we dare to fight back against their violence.

Support the protests, not the riots.

Good people support justice and freedom, and they oppose immoral actions no matter who does it. Law and order is not freedom and justice. Law and order is the repeated justification used by authoritarian regimes in history to use violence and oppress people.

If you’re in support of police aggression, violence or murder of people, then you’re not a good person.

If you’re in support of rioters vandalizing or stealing from others, then you’re not a good person.

From the scamdemic COVID lockdown to riot martial law, we are being conditioned to accept a lockdown society.

To hear more of this type of reasoning, listen to the recently made videos below:

Who Is Placing Piles of Bricks at Protests?