Vaccines Are Totally Safe? Vaccine Makers Have Immunity for Vaccine Injuries, US Govt Pays Hundreds of Millions in Lawsuits Each Year

The public conception about vaccine safety is that vaccine are 100% safe. They think there that vaccines don’t have any safety issues. And if presented with evidence, many (if not most) will deny it in order to hold onto the fabled belief of vaccines being completely safe.

Some people know there are safety issues with vaccines, yet still advocate for vaccines. Those who are vaccine injured or die as a result are considered collateral damage under the utilitarian model for society. Some people have to be sacrificed in order to protect everyone.

Vaccines could be made to be more safe, or completely safe, maybe. But why isn’t that happening?

Big pharma corporations have a reduced incentive to create the safest vaccines possible because they are not directly held accountable in the US. They can’t be sued for any of their vaccines causing injury or even death.

This inability to sue them came as a result of a 1986 law that gave pharmaceutical companies total immunity from being sued. Prior to 1986, there were many lawsuits against vaccine manufacturers that they were overwhelmed and lobbied/blackmailed the government to grant them legal immunity or they would stop making vaccines at all. Vaccines are so harmful that they can’t survive in a free market.

This created a shield over them and prevented a feedback penalty from creating harmful products that would disincetivize making vaccines that result in harming people. People would instead have to sue the US government, and maybe get paid for injury from vaccines by the National Vaccine Injury Compensation Program (NVICP) established by the U.S. Department of Health and Human Services (DHHS) in 1988.

Over the past 4 years, US government has paid out over $200 million on average.

The federal Advisory Commission on Childhood Vaccines (ACCV) has held meetings at least twice per years since 2006 in order to make “recommendations to the Secretary of Health and Human Services on issues relating to the operation of the National Vaccine Injury Compensation Program (VICP)”. Included in these meetings are reports from the Department of Justice (DOJ) on cases settled for vaccine injury or deaths. 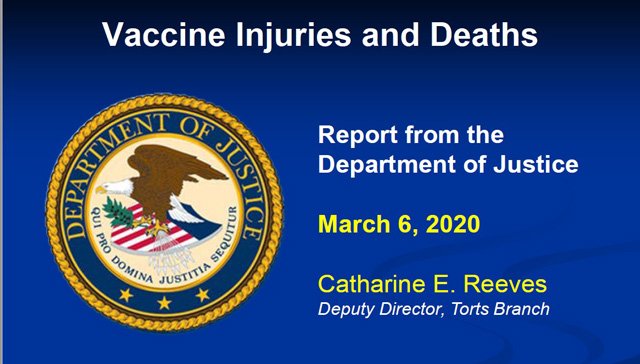 This past March had the first meeting of 2020, where 288 petitions were filed during the 3-month time period between November 2019 and February 2020, with 181 cases being adjudicated and 146 cases compensated. So far, over $57 million has been paid out. 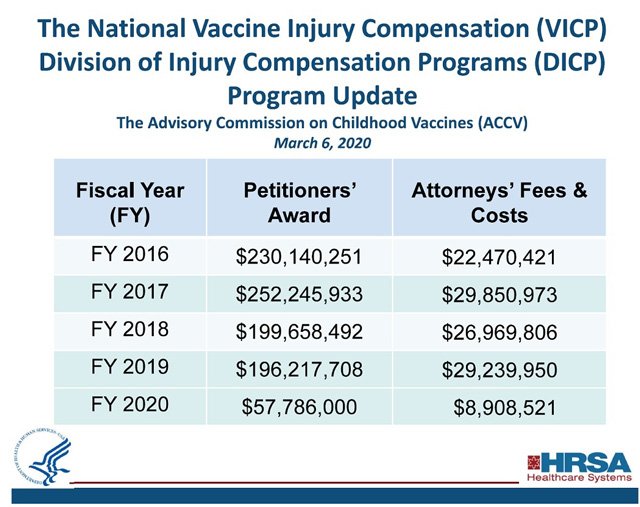 The report also lists the settlements for the types of vaccine and the injury it caused. In previous years, some cases were for deaths from a vaccine, such as the flu vaccine in 2018 for example. 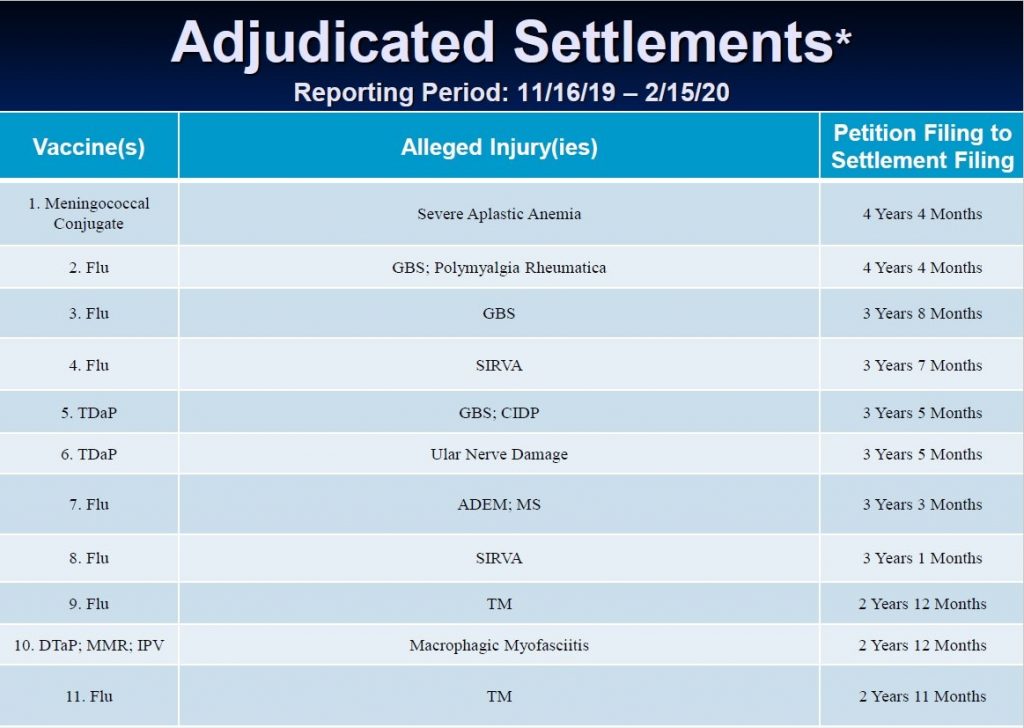 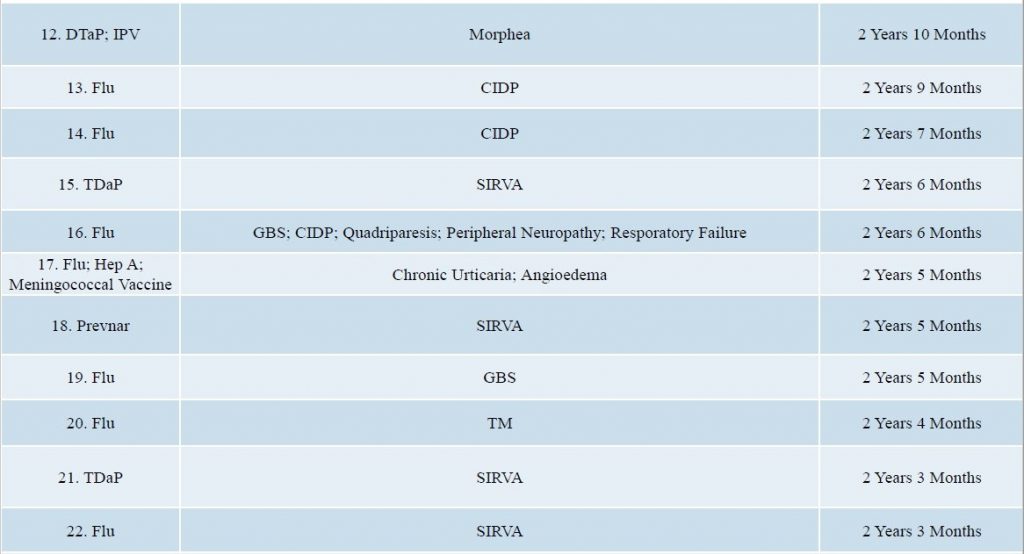 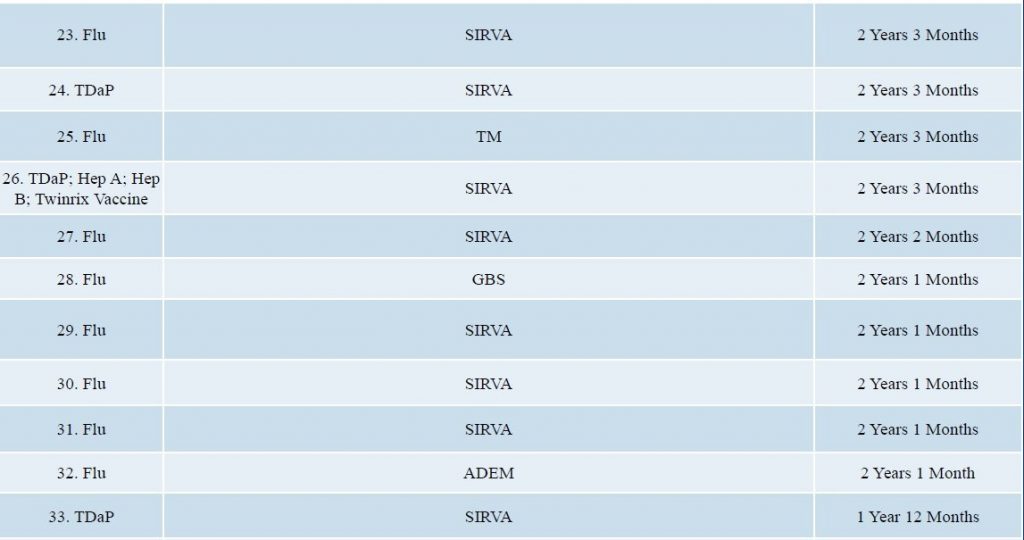 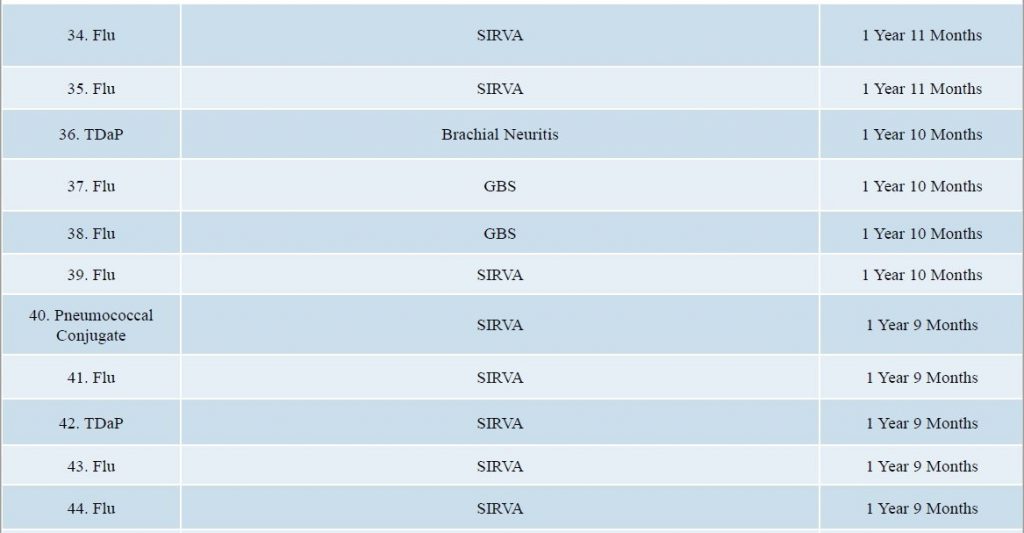 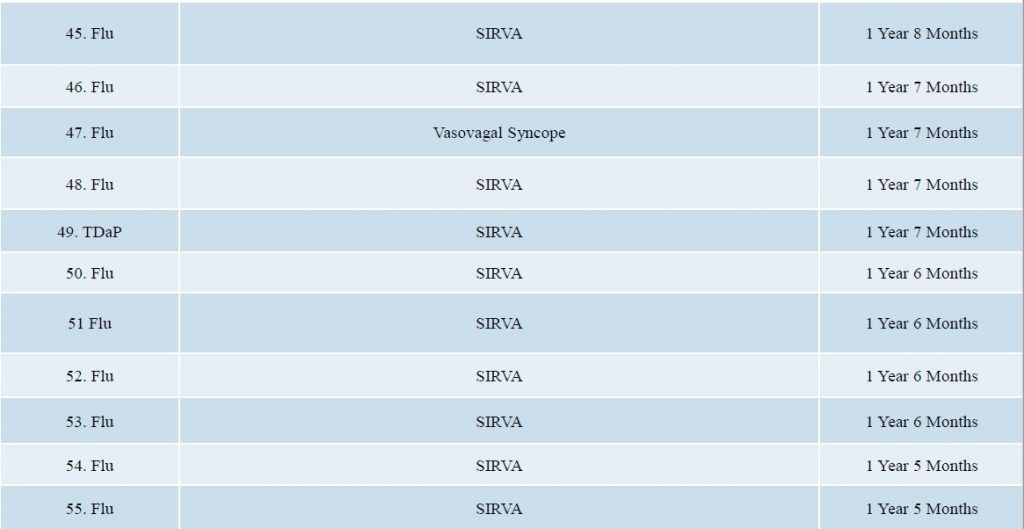 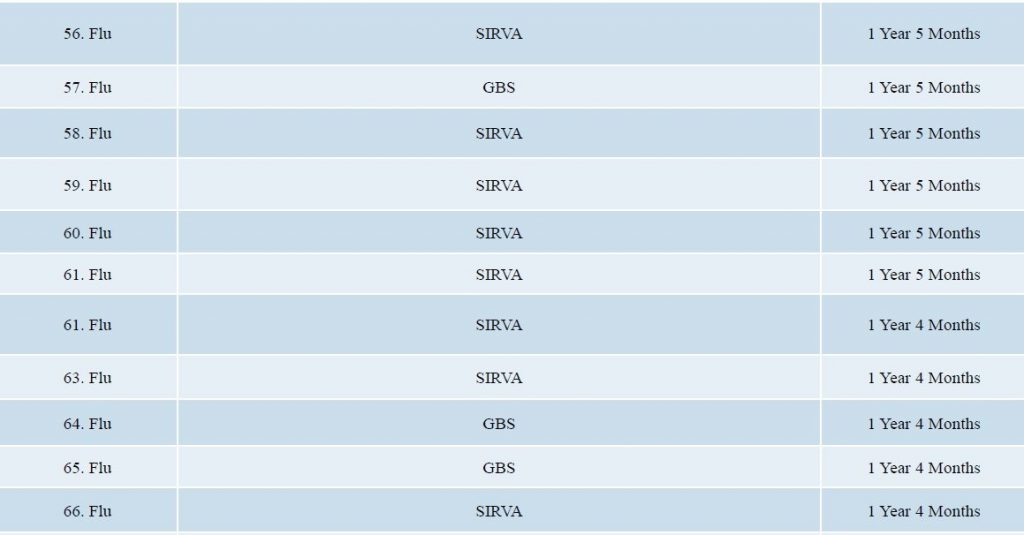 As you can see, the majority of the injuries are from the much-pushed, allegedly “safe”, but in reality not really safe, flu vaccine.

Here are the definitions for GBS and SIRVA:

Guillain-Barré (Ghee-YAN Bah-RAY) syndrome (GBS) is a rare, autoimmune disorder in which a person’s own immune system damages the nerves, causing muscle weakness and sometimes paralysis. GBS can cause symptoms that last for a few weeks to several years. Most people recover fully, but some have permanent nerve damage. Some people have died of GBS.

SIRVA stands for “Shoulder Injury Related to Vaccine Administration.” It can happen when a vaccine is injected into the shoulder too high or too deep and can cause several types of injuries. However, SIRVA can also occur when a vaccine is properly administered as well. This injury can, in turn, lead to intense, prolonged pain, limited range of motion, and shoulder-related injuries such as Adhesive Capsulitis or Frozen Shoulder Syndrome.

SIRVA can be caused by an injury to the musculoskeletal structures of the shoulders (for example tendons, ligaments, bursa) during the injection of a vaccine. Additionally, it can also be caused by the body’s immune system reacting adversely to one or more components of the vaccine.

The seasonal flu shot, among other vaccinations, is the most common cause of SIRVA because the vaccine is given annually to millions of people in the deltoid muscle of the arm.

There is a cap on the amount of compensation for types of cases, due to a limit on the funds for vaccine injuries. According to Wayne Rohde who authored a book on the Vaccine Court:

If companies were held accountable, as they originally were, families would be getting more for the negligence of vaccine makers to make their products safe. And companies would be incentivized to make safe vaccines. 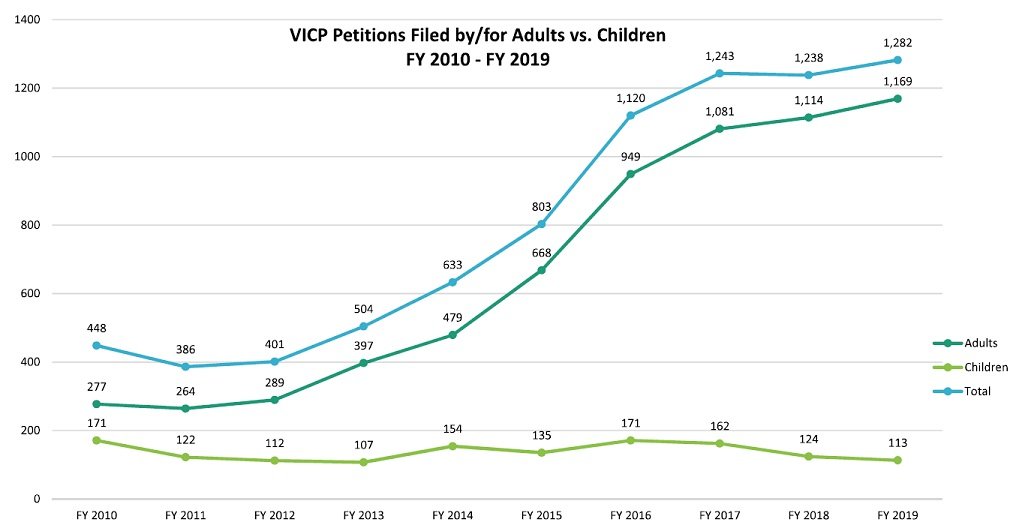 Even with the NVICP to compensate victims of vaccines, many people don’t know about this fund. In 2014 the first ever Government Accounting Office (GAO) report on the NVICP “Vaccine Court” criticized the government on that point. This means that even with the DOJ reports some claims and settlements for vaccine injuries, these are a fraction of the real number of vaccine injured. There are probably more vaccine injuries and deaths in reality, but people haven’t sought legal remedies for injuries because they don’t know they exist.

Doctors can report vaccine injuries or death to the The Vaccine Adverse Event Reporting System (VAERS), but some possibly don’t know what that looks like, and if they do they can be pressured to not report it, since in our present times to claim a vaccine causes harm is often professional suicide.

Nurses have spoken out about doctors not reporting vaccine injuries to VAERS:

To make matters worse, the NVICP ignored claims of autism caused by vaccines, mostly from the MMR vaccine. Autism became the most reports vaccine injury brought before the vaccine court. By 2010, 13,330 cases were filed, and 5,617 were autism cases. That’s 42% of all cases! The trust fund of the Vaccine Injury Compensation Trust Fund could not handle it. Of the 13,330, 2,409 were compensated, with 5,933 still pending and the rest dismissed. Most of the remaining cases were for autism.

To get rid of the hassle from autism claims, 3 test cases were selected to determine if there was any validity to the rest of the claims. Appointed judges ruled that vaccines were not the cause of autism, and applied those rulings to all other cases, throwing them out with on one getting compensated.

Hundreds of thousands of children and their families have been denied compensation damages as a result. This was done through the Omnibus Autism Proceeding. To this day, no one can file with the vaccine court to sue for vaccine injury compensation based on autism. The official position remain that vaccines do not cause autism.

Do your own research. Don’t be fooled by bad claims of “science” that proves vaccines are totally safe (as you can see, they aren’t). Don’t fall for the deceit from the so-called “fact checkers“. Don’t deny reality.

Vaccines aren’t 100% safe. Some people have regrettably changed their position only after witnessing their child, someone they know, or themselves becoming vaccine injured. Sadly, that’s what it takes for some people to wake up to the false reality we live in.

If you still want to take the risk of being vaccinated for something treatable like the flu or COVID-19, then that’s your choice. From my research on the topic, the risk from a vaccine is greater than the virus, be it the flu or COVID-19. I’ll take my chances without a vaccine.