Our Universal Duty and Privilege

No matter what our individual lives are like, we all have a universal duty and responsibility to truth and morality.

Failure to do so leads to negative consequences as a sort-of self-imposed punishment brought about through ignorance. Aligning with these responsibilities will provide us with the privileges and rewards that comes with living the right way.

Try to deny and violate a truth in reality like gravity, or the moral truth of people’s right to self-defense, and sooner or later you will find yourself facing the consequences of that denial through your own actions that violate such a reality. See how long you can simply do whatever you want by ignoring reality.

My Previous Model/Terms for Reciprocal Causality of Moral Law 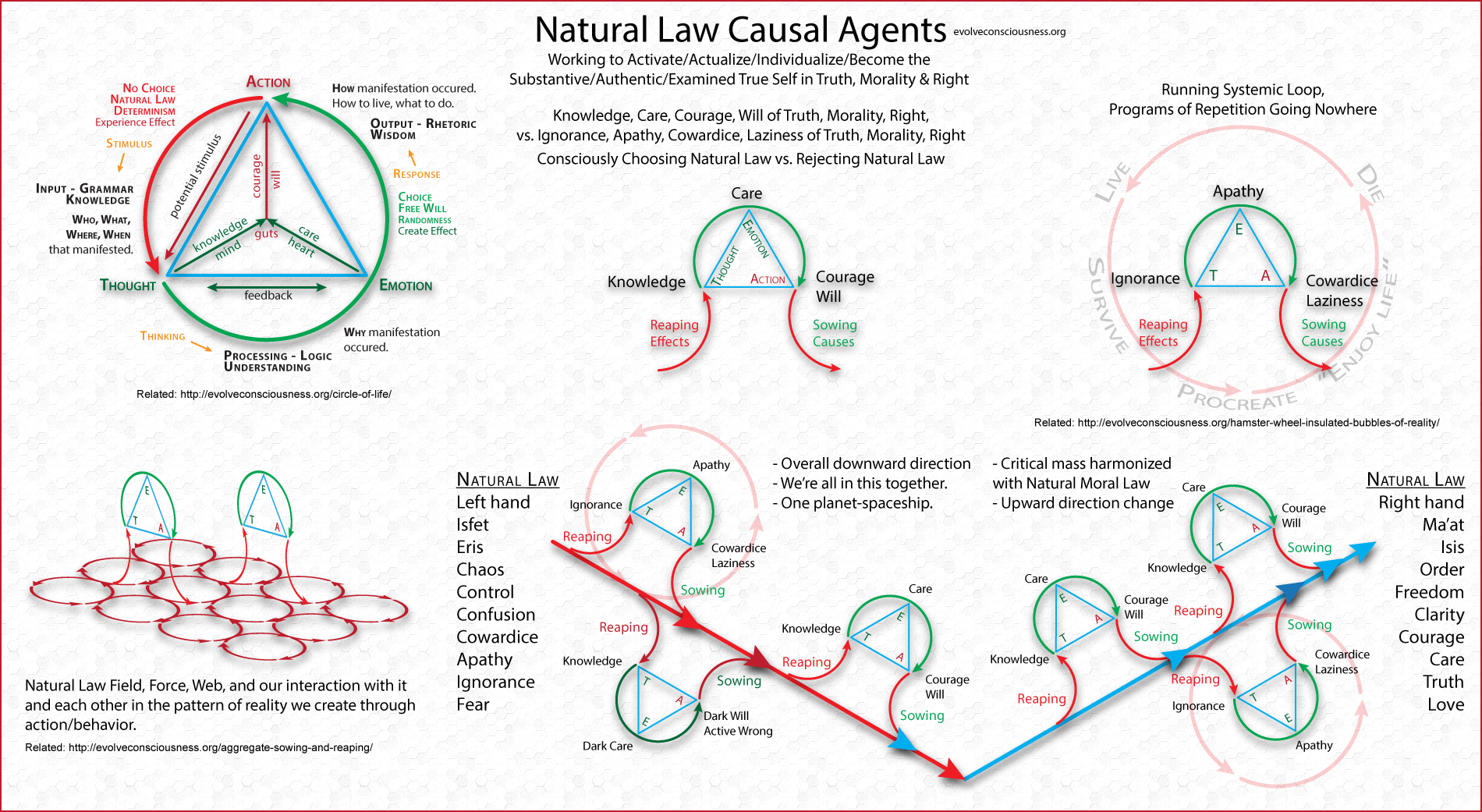 Terms are symbols and images to help elucidate an understanding.

Ignorance is not bliss. Truth will set you free. Increasing awareness of truth and moral truth/law benefits ourselves and everyone. Moral truth determines the quality and condition of our lives.

Various systems of controlling our way of living are fabricated and provide directed avenues — preselected and predetermined paths of life choice and economic survivability — for us to “choose” from.

When something happens, there are supposed to be causal reciprocal forces if everything is able to respond normally. In human systems, we alter the responsive capacity of many things, including ourselves. The ability to respond in humans is also called response-ability, i.e. responsibility. Our responsibility in life can be modified. We can be made less responsible beings, less capable, less dealing with our own affairs and our own “shit”, giving away our responsibilities to others, and in effect becoming powerless.

In our human system of police, courts, and government, many countries don’t allow self-defense, or the use of a knife or gun in your home to defend yourself, or to carry a knife in public for defense. You have to abdicate and give away your ability to respond in life to causal stimulus, and become inept, learning to be helpless.

The causal reciprocal forces that would normally affect us or others, are supplanted through the insulated bubbles of reality that we have created in our human world. Man’s system of rewards/privileges and consequences/punishments (the “legal” system) are what become the way of living within that attempt at an isolated and temporarily insulated system. The Natural World of the Universe has Natural Laws in operation. Humbling ourselves under them allows us to operate within the boundaries of existence. The man made “laws” and systems are often delusional and out-of-whack with reality and moral ideals. They are supplanting the natural process of our development to be able to align with those natural moral laws based on our behavioral understanding throughout life. We can’t response to causal forces, we can’t reciprocate, we are made stagnant and helpless to prevent us from learning how to be more moral.

This applies to the overall behavior of humanity, as we aren’t facing the causal reciprocal forces of how we pollute ourselves into sickness, and many other factors of natural laws of causality. We live in a sick society, create more of a sick society, because we were born into a sick society. Copies of the Social Program

We copy each other and what is around us to form our identity, usually in some mold of conformity in order to increase our acceptability into the normalization of society, i.e. to be an insider rather than be an outsider.

Instead of learning through a natural behavioral development in reality through the Reciprocal Feedback System that moral law is a part of, the man made legal system is encapsulating our behavior, sense and experience of reality in a way that has also supplanted the natural behavioral learning system of learning from our behavior and mistakes. Certainly at the larger scale as a species, we are having a hard time learning from our collective mistakes.

We copy a man’s “law” system where humans arbitrarily decide what is “right” and “wrong” with no real foundational principles based in truth. They decide what rewards and privileges get given to those who comply with their “laws”, and what consequences and punishments are given to those who defy their dictates. Again, none of this is none on an objective basis of moral understanding of behavior.

Instead of learning from an environment of people who learned and lived under moral truth/law more fully, we learn form the pre-existing, conditioned, altered state of living that has pervaded humanity for millennia.

We are not learning objectively from observation, thinking, feeling, contemplation, reflection, etc. We do not learn about moral consequences to our behavior as fully as we should.

The co-dependence in the system has us in isolated, insulated, encapsulated, compartmentalized interaction and understanding with the overall functionality and truth of the system we live in. We don’t see the reality of the way of life we are living, at least most of us don’t. We are also insulated from the functionality and Reciprocal Feedback System of our behavior.

In our reversal of acceptance of the establishment, when we go against the status quo normalized accepted concepts, we can end up “throwing the baby out with the bathwater”, in a sense. Duty and privilege can be such casualties.

Duties are not to be upheld in the falsified construct of deluded “laws” based on whims, wants, desires, power, etc. that some person invents. That creates a continuation of the insane mindsets that created those false “laws” in the first place, which is chaos and slavery.

Our duties are to truth and morality, not to the whims of someone else’s mind, like obeying orders or the chain of obedience. Right and wrong can be objectively known by each of us ourselves.

The duty and responsibility to truth, good, right, and morality, will allow us to create the true freedom, peace and order we want and be privileged to live that way. Those are the rewards and privileges we can get with humility under truth, and specifically moral truth.

Duty to truth affords privilege because we align with reality, and the reality of optimized social cooperative living. Working against reality, truth, or moral truth, does not work out for our benefit in the long run.

Not convinced of how important truth is? Think about someone lying to you, being dishonest, or betraying you. How important is that in your life? Truth is what’s in common between the three circumstances. Truth is the foundation for everything.