President Trump has written a letter to the WHO Director-General, Dr. Tedros Ghebreyesus. In it, Trump says the WHO needs to make corrections or improvements to how they operate, or else funding will be completely cut. 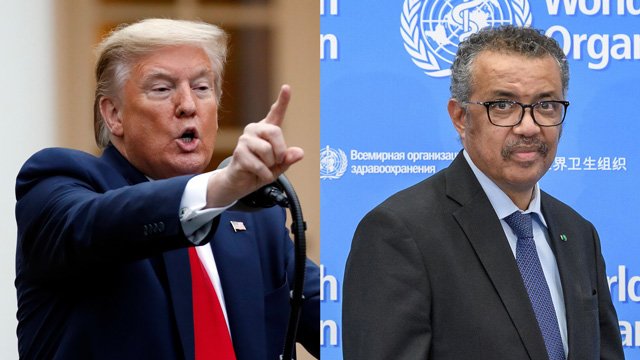 Trump made the letter public in a Tweet yesterday: 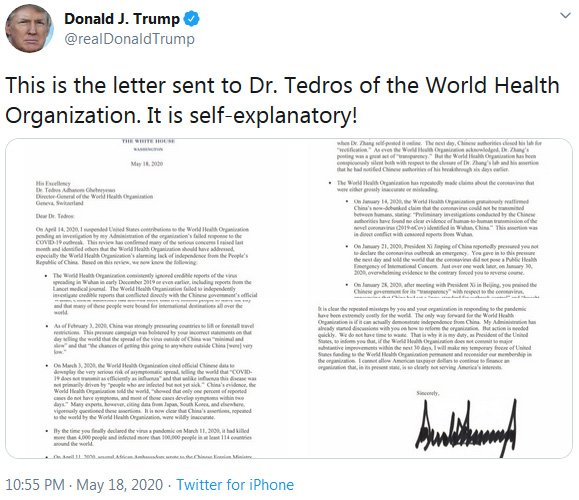 Trump first threatened to remove funding permanently by temporarily suspending funding on April 14. The permanent cut was pending an investigation into the WHO’s failure to respond to COVID-19. Their lack of independence from China is a key point in the letter.

The key points are:

The letter ends by saying the improvement needed for the WHO to keep funding is for them to “actually demonstrate independence from China”. If not done with visible actions, Trump said he will “make my temporary freeze of United States funding to the World Health Organization permanent and reconsider our membership in the organization”.

We can wait to see if the WHO will do or say anything to demonstrate what Trump is asking. I’m not sure how. But one thing to note about how China acted and how the US acted, is the lockdown and censorship.

The US and other countries got their lockdown idea from China, as recommended by their health advisors. China had apparently clamped down on the virus spreading by through their draconian lockdown. This was the model to be employed in order to have similar effects in other countries.

While Chinese authorities were busy ignoring the outbreak at first, and then later when they were locking down the country, they were also busy silencing and punishing doctors for speaking out about the virus. Chinese institutions were restricted from publishing information about the outbreak as well.

This censorship is strongest on YouTube, but has also reached Facebook and Twitter. They have even censored companies that work on treatments that Trump has talked about, yet isn’t supported in the mainstream. YouTube is the worst though, as doctors themselves are being silenced for giving not only opinions, but factual data that contradicts the official false narrative.

The most egregious, as far as I’m concerned, is done by the censorship of YouTube and the omission of the mainstream media regarding treatments. Doctors have demonstrated highly effective use of hydroxychloroquine, azithromycin and zinc to over 99% recovery of patients. Even natural treatments to boost immunity and have less severe symptoms, like vitminc C, D, aA and zinc, have been censored on YouTube. The media will also not talk about it.

This information is crucial for people to save themselves, rather than depend on the negligence and incompetence of the medical industry which robotically put people on ventilators instead, resulting in 76-97% fatality. Many deaths could have been avoided.

Instead, the system people believe in is demonstrably inflating the number of deaths to manipulate people through fear into giving up their freedoms and act like unthinking robots. It’s a sham of a system and society we live in. From the medical, media and governmental systems, people are being lied to and information withheld.