Get out your crazy chair and take out the insane popcorn, because this is nuts. A Nashville Metro Council councilwoman named Sharon Hurt went off the chart in her perception about people who don’t wear masks. Yes, the title is accurate. She people who don’t wear a mask spread coronavirus and should be hit with

At the August 5 meeting between the city’s Public Safety, Beer & Regulated Beverages and Health, Hospitals, & Social Services committees, she said:

My question goes back to legislation. I don’t know if Mike Jameson could be the one to answer the question, but my concern is — you know I work for an organization, that if they pass a virus, then they are tried for murder or attempted murder, if they are not told … and this person who may very well pass this virus that’s out in the air because they’re not wearing a mask is basically doing the same thing to someone who contracts it and dies from it.

It seems to me that we have been more reactive, as opposed to proactive, and a little too late, too little. So, my thing is, maybe there should be legislation, stronger legislation, I don’t know if Mike Jameson is… can speak to it, but maybe there needs to be stronger legislation to say that if you do not wear a mask and you subject exposure of this virus to someone else then there will be some stronger penalty as it is in other viruses that are exposed. 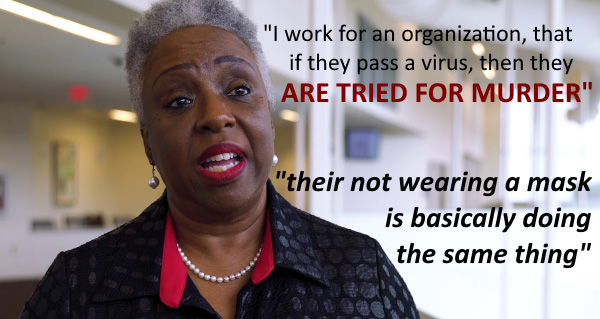 The beginning of her statement was in reference to the criminal charges applied to people with HIV or AIDS for spreading the virus to their sexual partners without informing them of their illness.

For the time being, she and her crazy idea was stopped by the “legal authority” limitations in place, as Mike Jameson, the director of legislative affairs and senior adviser to Nashville Mayor John Cooper (D), told her:

“[T]he council does not have the opportunity on its own to create criminal legislation, that is a state creature. We’re warranted by state law, to apply criminal application to violations, just for example, as the state law allows us to apply a Class E misdemeanor to violate a health director violation. But, in terms of creating a new code, or class of criminal offenses, that is a creature of state law.”

Gotta love them statists, always trying to state. Protecting the innocent from the super-deadly coronavirus. Hurt replied saying that was the expected asnwer she “was afraid” was going to be given. What we need to be afraid of, is authoritarians like this.