The initial model that scared the world into a fear-hype panic about COVID-19, was created by Neil Ferguson of Imperial College. This model predicted 2.2 million dead in the US and 500,000 dead in the UK if the government took no action. He called for lockdowns that would last 12-18 months. Economic problems? That’s not important compared with the virus being so deadly, right?

Ferguson was also asked what the “best case” scenario would be, contrasted to the above “worst case” of 2.2 million deaths in the US. New York Times’s Nicholas Kristof was told the best case was “1.1 million deaths” with modest mitigation strategies.

The reality that has materialized is no where near this bad prediction. Rather than admit the model was wrong from the get go, that it grossly misrepresented the threat from COVID-19, Ferguson tried to suggest that the only reason the deaths were so few was because the government listened to his recommendation to implement lockdown measures.

He said that just 1 day after the lockdown was implemented. One day of lockdown, and he thinks this is why there were so few dead. What a joke! If the lockdown was done two days later, it would have changed nothing for the amount of dead at the time, yet Ferguson would deceptively claim the lockdown saved lives. Ferguson later states the UK would face about 20,000 deaths.

This was one model that was used to spread the fear-hype panic about COVID-19. One model. Was it verified by others? No. Neil Ferguson refused to open source the code for others to validate. Yet, with this one model, the UK government and others sprung into actions to lockdown societies.

Many modeling experts asked for the code to be open sourced, but Ferguson refused. That’s odd. He didn’t want peers to review his model. Why? Because it was trash, and he knew it. Read to how he spun objections to the model and requests to oepn source the code:

I’m conscious that lots of people would like to see and run the pandemic simulation code we are using to model control measures against COVID-19. To explain the background – I wrote the code (thousands of lines of undocumented C) 13+ years ago to model flu pandemics… 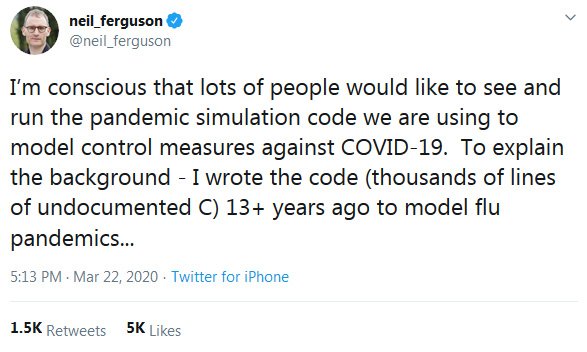 I am happy to say that @Microsoft and @GitHub are working with @Imperial_JIDEA and @MRC_Outbreak to document, refactor and extend the code to allow others to use without the multiple days training it would currently require (and which we don’t have time to give)… 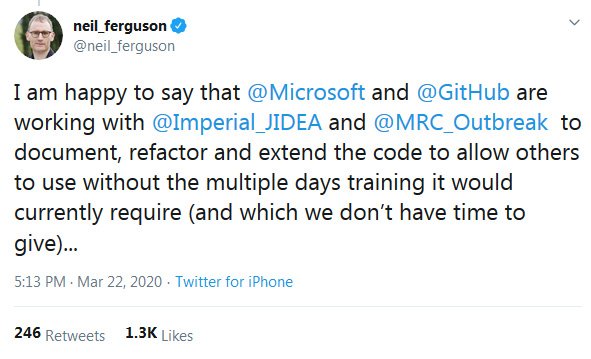 The code was for a flu model made in 2005 for Taiwan. Rather than open up the code for others in the field to review at that moment and help influence any actions governments were taking, Ferguson chose to go to Microsoft instead. Why? To re-write the code and make it better. So no one actually got to see the original bad code used to make a bad model that governments used to lock everyone down. Since when is Microsoft the experts to model epidemics? Fishy stuff.

Of all actions he could have taken, he went running to Microsoft, not other experts in field to properly model the pandemic. That’s interesting. Why?

Could it be due to some loyalty or influence related to Microsoft? Maybe the founder of Microsoft Bill Gates?

The Gates Foundation funded Imperial College at various times. Look at the coincidence of the timing for the 29-fold (29x) increase in funding. In 2010, $2 million was given to Imperial College:

In March 2020, $79 million was provided to Imperial College:

Was this a ‘thank you’ kickback for helping push a fear-hype panic and helped to push the vaccine agenda Gates wants?

To understand why the Ferguson model was in much need of having peer review of the model and code, look at how his past models have utterly failed. He has a horrible track record.

Ferguson’s model was off by an order of 27 when looking at Sweden. That’s a gross overestimation of deaths from a ‘no nothing’ model of governments. Sweden has made recommendations, and people have chosen to isolate or distance at their leisure. But no lockdown measures were implemented. No forced closing of businesses.

This whole Ferguson model was wrong from the get go, it was never peer reviewed, when asked, the code was not open sourced, but kept hidden, and Ferguson ran to Imperial College funded Bill Gates’ company Microsoft to redo the code instead of letting other experts review it.

Oh, by the way, Ferguson is now saying that if the UK lifts lockdowns, even gradually, that “100,000 could die“. Unbelievable. Forget about real world data, like that of Sweden. Forget about anywhere from 6-23% of people in various populations studied and tested are already infected, drastically driving down death rates to within to be similar to the flu. Ferguson has more bullshit models to keep us in lockdown.