I don’t think so. I have to double-check. We were arguing, discussing, or trying to argue with the state. Not because of the numbers — it’s 100…it doesn’t make any difference if it’s 99 — but the fact that the individual didn’t die from COVID-19…died in the crash. But you could actually argue that it could have been the COVID-19 that caused him to crash. I don’t know the conclusion of that one.

Yup, COVID-19 was suggested as the cause to a car crash. But a few days later the death was removed from the “official” COVID-19 death count. Inflated death counts have been exposed before as part of the official government procedures for categorizing deaths, but this blatant falsification is absurd.

I asked at the time, if this was the only incident where this type of thing was happening. The answer is yes, demonstrably, as more local news investigations report the same thing happening in Palm Beach, again in Florida. 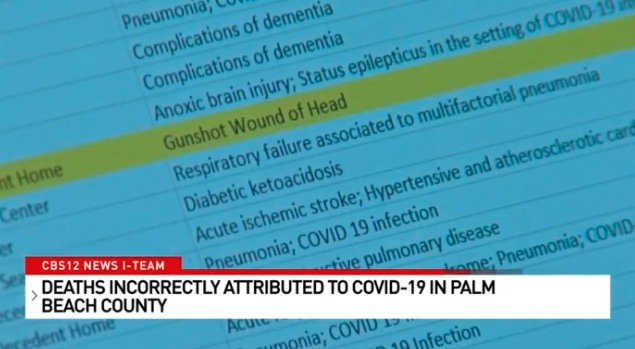 The news investigative team was these statistical anomalies by going through the medical examiner’s data of all people who recently died in Palm Beach County. In total, there were “eight cases in which a person was counted as a COVID death, but did not have COVID listed as a cause of contributing cause of death.”

So these false attributions to COVID-19 deaths weren;’t even using the faulty COVID-19 coding system the CDC encourages.

Would these deaths have been corrected if the news didn’t call out the falsity? Maybe. But I doubt it. Only exposure of the falsity resulted in the corrections. How many other cases are there of false COVID-19 deaths? A lot, considering how the CDC was telling people to report deaths.

Senator and Doctor Scott Jensen spoke about how the CDC and hospital administration pressure doctors to code people as dying from COVID-19 in opposition to how causes of death are normally done. Listen to him explain it: