Lockdowns are a Failure, Reason to Get Off the Corona-Phobia Bandwagon Pt.2

Lockdowns are touted as effective, and necessary. Shut down businesses, and make people isolate. But in most cases, the lockdowns were initiated too late, when the new cases had already reached the peak and were flattening out or on their way down. Some places with no severe lockdowns only faired slightly worse, or better compared to some high lockdown countries. 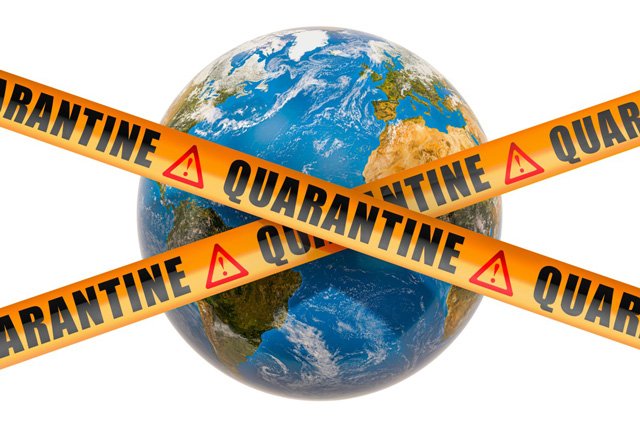 China lockdown as the model

China was the first to initiate wide-spectrum lockdown in their society. China went into Lockdown, and all of a sudden the reported cases fell. Some speculate that the data from China is to be taken with a grain of salt. They are extremely authoritarian and wanted to present themselves as having done well to curb the infection in their country.

China is in a geo-political power battle to elevate itself to a respectable position. They want to be seen as a leader for other nations to respect, and potentially model. Communism does want the world to be communist. Socialism is the precursor to communism, and the new world order adherents for over a century have been trying to bring in their form of socialism.

On February 13, more severe lockdown were issues on shutdowns of non-essential companies in the Hubei province, with schools to follow on February 20. On March 13, Hubei traffic is opened up, except for Wuhan, and work is allowed to resume in the days after. 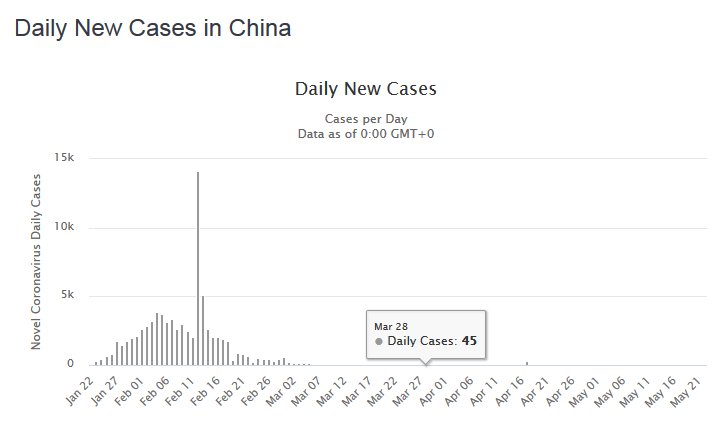 New cases of COVID-19 in China practically stopped in mid-February. A lockdown doesn’t immediately stop the amount of new cases coming in. It takes time for the virus to incubate, about a week, and another 1-2 weeks for symptoms to appear. With two weeks before someone even presents themselves to be tested, you can shift the date-range over two weeks to the left to know when they actually became infected.

New cases were already falling prior to the lockdown, even without the 2 week shift to know when people became infected. The lockdown looks to have been initiated when the peak of the curve had been reached anyways. The increase of new cases was already falling before the more severe lockdown on companies.

But, despite this data, the world was thrushed into a pro-lockdown frenzy. This was highly precipitated by the fear-hype panic of the doomsday model from the Imperial College and Neil Ferguson. I’ve written about this model at several points in the past couple of months. The model’s overblown prediction is another good reason to get off the corona-phobia bandwagon.

Notice how China was the first to employ the lockdown measures. With a myopic perception of the lockdown leading a fall in cases, China was used as a model for what to do. And so, countries adopted the authoritarian draconian measures that China came up with.

The next focus of COVID-19 was Italy. Italy went into full lockdown, like China, with no more work unless it was essential, on March 21, and all outdoor activity on March 22. There was a gradual increase of lockdown measures up to that date, with many businesses told to close: “Conte announced on 11 March that the lockdown would be tightened, with all commercial and retail businesses except those providing essential services, like grocery stores, food stores, and pharmacies, closed down”. “On 21 March, Conte announced a further enlargement of the lockdown, by shutting down all non-necessary businesses and industries”. 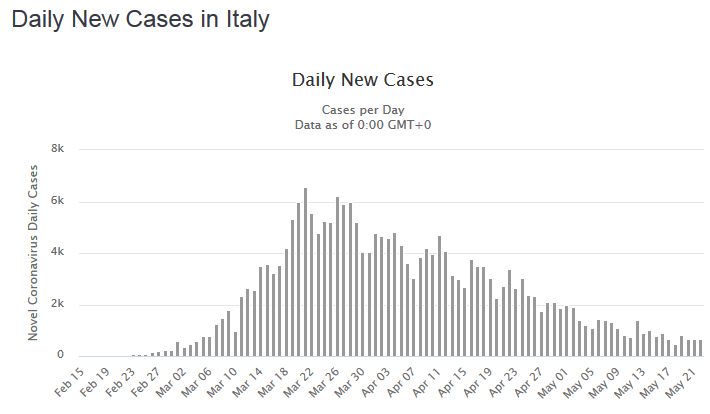 Similarly, the peak of new cases was already reached when the full lockdown on March 21 was started. The existing people who were infected took a week to develop the infection and 2 weeks for symptoms. Shifting the date over by two weeks shows that the infections had already peaked. By two weeks after the full lockdown, cases were falling. Two weeks after the lesser lockdown on March 11, the peak had already been reached. This indicated that the lockdown was started as the curve had reached it’s peak. 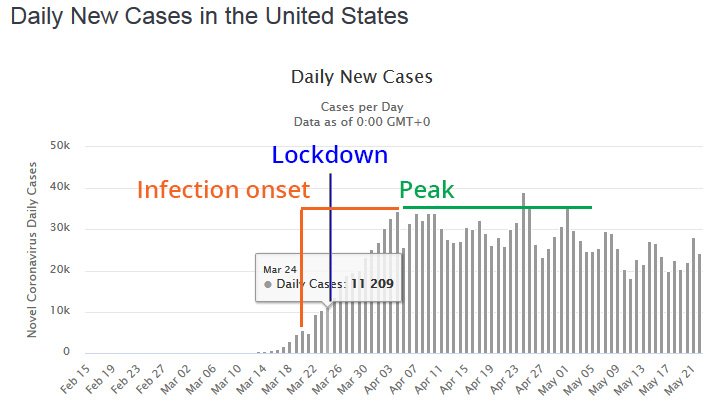 You can even look at the US, and you see a similar pattern. Shifting the detected cases 2 weeks to find out when they were likely infected, you see that the peak of curve was reached near March 22. The lockdown was started on March 24.

In all these countries, and most likely any others you look at, the cases were already peaking or going down before the harsh lockdown measures were put in place.

The lockdown didn’t work. It was unnecessary. The short term effects are harsh on people
s ability to survive in a monetary society. And the long term effects will result in more deaths that COVID-19 itself. This is due to the great rise in unemployment, poverty, depression, drug use, domestic abuse, sexual abuse, child abuse and suicides. Plus, there are hundreds of thousands of cancer screening tests not being done that push of diagnosis of cancer and that will lead to lives lost.

Isolated are 2/3 of newly infected in NY 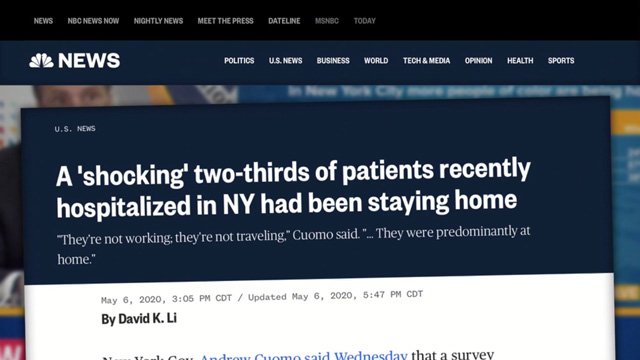 To further illustrate this point about the ineffective lockdown. New York is the focus of cases in the US. It appears that 2/3 of hospitalized patients for COVID-19 had been isolating at home. If the lockdown measures were truly effective, this wouldn’t be happening.

In Europe, the results of comparing the lockdown were done, and the conclusion is:

In Europe, roughly three groups of countries emerge in terms of fatalities. One group, including the U.K., the Netherlands and Spain, experienced extremely high excess mortality. Another, encompassing Sweden and Switzerland, suffered many more deaths than usual, but significantly less than the first group. Finally, there were countries where deaths remained within a normal range such as Greece and Germany.

Yet the data show that the relative strictness of a country’s containment measures had little bearing on its membership in any of the three groups above. While Germany had milder restrictions than Italy, it has been much more successful in containing the virus.

If you look at Sweden where there was no harsh lockdown, the survival rate in the population is 99.96%, while in the US with a harsh lockdown modeled after China, the survival rate in the population is 99.97%. That’s a difference of 0.01%. I covered Sweden vs. US lockdowns twice to show the data over the past few weeks. It’s not much worse than a bad flu season. Sweden was even praised as “model” by the WHO for how it’s lockdown-ignoring strategy.

As I’ve mentioned in previous posts, viruses can be aerosolized and cross continents. The virus may be in the air. Imposing harsh lockdown has more negative effects than positives. Sweden has developed herd-immunity. Sweden doesn’t need the magical vaccine to “save” them, and neither does anyone else in the world. Sweden also didn’t destroy it’s economy and bring on the long-term consequences yet to be felt by others.

The lockdown was first supposed to be about flatting the curve so as to not over-burden the hospitals. I’ve covered how they are far from burdened in most areas. Even in New York, they never took advantage of the medical ships sent to their port. $660 millions spent for field hospitals that were hardly used.

Now the goal post has moved for why the lockdown is needed. They want to keep the curve flat, forever. In many areas, the lockdown and/or other measures are being kept in place until the vaccine unicorn saves everyone. As if Sweden didn’t exist to show the better way to do it. As if a lockdown or vaccines are needed to deal with this scamdemic.

Not to mention the encroaching surveillance state, vaccine passports, tracking and tracing, drones and facial recognition to monitor people. The world has gone crazy over a non-crisis manufactured into a crisis to put people into fear and accept this madness.

The lockdown is a sham. It’s a scam. This is why you need to get off the corona-phobia bandwagon.

Edit: I forgot to go through this article and include it’s arguments: Do Lockdowns Work? Mounting Evidence Says No.

The coerced economic “shutdowns”—enforced with fines, arrests, and revoked business licenses—are not the natural outgrowth of a pandemic. They are the result of policy decisions taken by politicians who have suspended constitutional institutions and legal recognition of basic human rights.

At this point, the question I usually get is, “What’s your evidence that lockdowns don’t work?”

It’s a strange question. Why should I have to prove that lockdowns don’t work? The burden of proof is to show that they do work! If you’re going to essentially cancel the civil liberties of the entire population for a few weeks, you should probably have evidence that the strategy will work. And there, lockdown advocates fail miserably, because they simply don’t have evidence.