Gatherings Will Kill People, but Protests Are Fine…

Be careful, COVID-19 is very dangerous. It’s so dangerous, that with most deaths being in those 60 years old and above, the infected fatality rate is around 0.26%, which is within the range of a more severe flu season. It’s so dangerous, that you are not allowed to be too close to other people in the store, or have too many people in the same area outside. Unless of course, you’re a BLM protester. 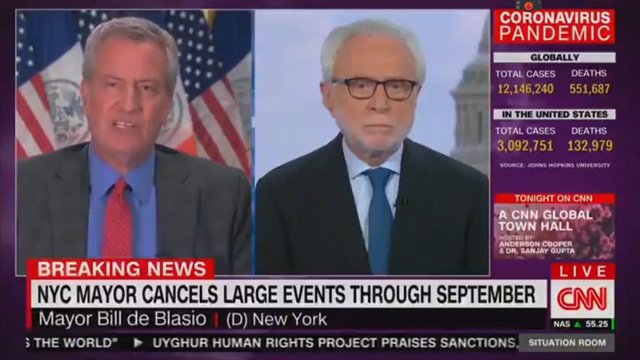 This is the contradictory wisdom being espoused by the New York City Mayor, and I presume other so-called “leaders” and “experts”. You can hear how stupid these decisions are, flying in the face of rational thinking, with Mayor de Blasio

“This is a historic moment of change. We have to respect that but also say to people the kinds of gatherings we’re used to, the parades, the fairs — we just can’t have that while we’re focusing on health right now.”

Once again the stupidity of government control dictates and mockery of our freedoms is being demonstrated. You can only protest what they allow you to protest. You can’t protest the forced lockdowns that put people out of work. You can’t protests the social distancing that keep people apart. You can’t protest the new mandates forcing people to wear masks that don’t even work to do what they claim to do. You can’t gather hundreds or thousands of people for any reason other than protesting in support of “black lives matter”.

Last month I posted about a news station in San Francisco’s Contra Costa County telling people about a so-called coronavirus facts not fear update on the stay-at-home orders. They openly stated that social outdoor gatherings of up to 12 people was allowed, but no more than 12. But they did allow protests of up to 100 people, but no more than 100. This is despite the fact that protests were occurring with several hundred, and even several thousand people being present. 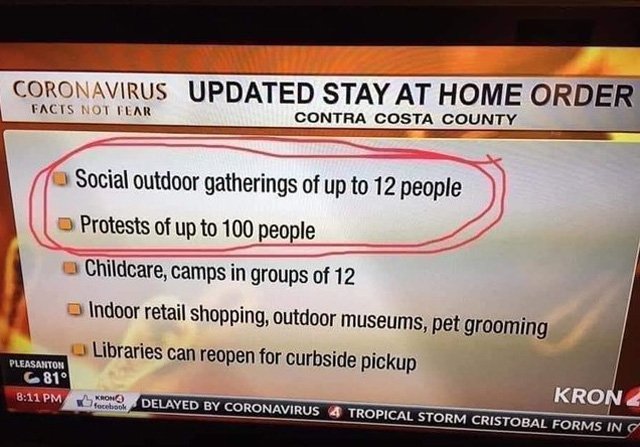 If you don’t obey social distancing, police will arrest you for not obeying social distancing while they put you in a cage with others that force you to not social distance. It totally makes sense. These measures are not about people’s safety. The government’s response is about control, controlling people, and seeing how far people will let themselves be controlled.

It’s so absurd it’s laughable, but also maddening. This pandemic is so deadly that we need to prevent people from gathering in large numbers, unless your numbers are so large that we support what you’re gathering about, and then were going to let you do it. You can’t challenge their lies and bullshit with protests, but you can protest other stuff. Freedom in a post COVID-1984/2020 world.