Forbes: You’re Not Smart Enough To Do Your Own Research

Being able to make up your own mind on matters of any significance is an important ability to have. I would say it’s a necessity. Without that capacity, you simply adopt the conclusions of others. Freedom of the individual and the preservation of our rights requires us to be vigilant and not simply believe what we are told to believe. We need to be able to go look into things ourselves, tdo our own research. 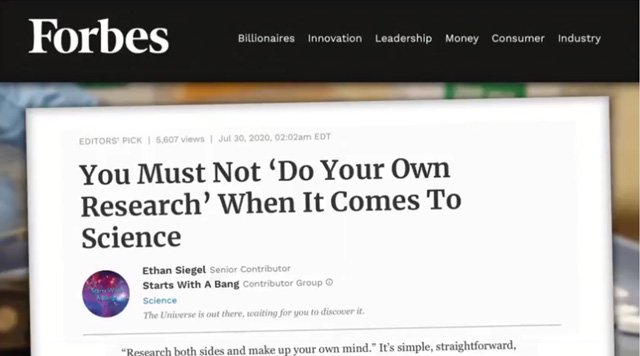 But for a Forbes Senior Contributor named Ethan Siegel, you aren’t supposed to go look deeper yourself. You

Siegel repeats a similar argument. Science is too confusing for your simpleton mind to be able to comprehend and properly evaluate what the priestly experts are presenting:

“Research both sides and make up your own mind.” It’s simple, straightforward, common sense advice. And when it comes to issues like vaccinations, climate change, and the novel coronavirus SARS-CoV-2, it can be dangerous, destructive, and even deadly. The techniques that most of us use to navigate most of our decisions in life — gathering information, evaluating it based on what we know, and choosing a course of action — can lead to spectacular failures when it comes to a scientific matter.

You, according to Siegel, don’t have what it takes to evaluate science on your own. You need to leave it to the experts to tell you what the science says. Only appeals to authority will be able to grant you a glimpse of what science is allegedly discovering.

The reason is simple: most of us, even those of us who are scientists ourselves, lack the relevant scientific expertise needed to adequately evaluate that research on our own. In our own fields, we are aware of the full suite of data, of how those puzzle pieces fit together, and what the frontiers of our knowledge is. When laypersons espouse opinions on those matters, it’s immediately clear to us where the gaps in their understanding are and where they’ve misled themselves in their reasoning. When they take up the arguments of a contrarian scientist, we recognize what they’re overlooking, misinterpreting, or omitting. Unless we start valuing the actual expertise that legitimate experts have spent lifetimes developing, “doing our own research” could lead to immeasurable, unnecessary suffering.

I first heard of this nonsense article from The High Wire

The hubris of this author is astounding. Siegel attempts to justify his argument by pointing out how people do their own research on water fluoridation and come to allegedly false conclusions about it’s health risk. This choice to demonstrate their point failed. Instead, it demonstrates the authors own failure to do their own research properly and only accepts the conclusions of “experts” and “authorities” in the complete safety of water fluoridation.

Siegel admits excessive amounts can be problematic. But somehow, they believe that fluoridation is done with precise measurements to only add the exact quantities in the water supply that reaches people’s homes in the intended dosage. That this is a safe medically helpful process, and not some toxic waste substance that was repurposed to essentially dumb us down.

Those who haven’t done their own research to come to their own conclusions, would also accept the status quo position of water fluoridation is safe. But those who do, will be exposed to different argument and experts who tell a different and alarming story about fluoride in our water. A trial against the the EPA is underway.

For those interested, check out Derrick Broze who has been covering the fluoride trial. You can find his