Fact Checkers Act as if More Data is Less Reliable

It’s pretty laughable to analyze the so-called “fact checks” of the Ministry of Truth on social media. These non-fact checkers claim to be fact checkers, and get to censor content with claims of “fake news”.

After seeing many of these such claims of fact checking to declare something fake news, you have to draw some conclusions. Are these people too stupid to know how to thinking properly and get lost in their own tangled web of thoughts? Are they deceiving and manipulating people on purpose to try to control what information people will even consider? I conclude it’s the latter.

In many cases, they don’t actually look at the core argument. Instead, they create a straw man to attack. And then proclaim victory over the scarecrow that few if anyone was even supporting. I’ve seen a few from USA Today and they just create another argument to debunk than what the actual issue is. Sometimes the title does represent the argument they are trying to do a hit piece on, but then in their own argumentation to try to prove it’s false information, they create a straw man to destroy. It’s wild. 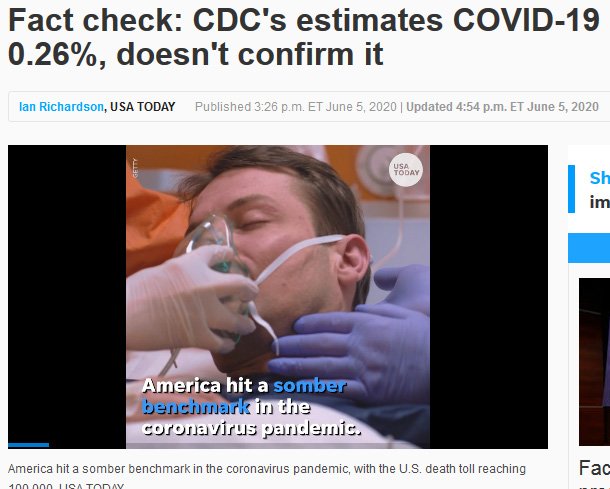 Source
One of the latest ones comes down to more data means you are going to make less reliable conclusions. That essentially what they are getting at. I am talking about the USA Today Fact check: CDC’s estimates COVID-19 death rate around 0.26%, doesn’t confirm it.

This one is so feeble just from the title alone. Look at what they are saying. The CDC estimates an infection fatality rate of 0.26%. That’s true. The CC did say that. They can’t argue that. But the thing they try to pick apart and focus on is the issue of “estimate” vs. “confirmed”.

What does that mean? They try to argument that because it’s estimate, it’s not “confirmed”, whatever the hell that means to them.

Take a look at how the media uses “confirmed”. They make claims of “confirmed” cases of alleged COVID-19 infections. Even their death counts are allegedly “confirmed”. COnfirmed by who? The authorities. That’s who.

Are these real numbers? Are they the reality? No. The CDC told doctors to code presumed or assumed cases of COVID-19 based on their judgment (whims). And hospital administration pressured doctors to code people as COVID-19 patients. None of this is scientific and actually confirmed. Yet, the media doesn’t have a problem reporting that as reality. It’s an estimate, based on data that’s inflated by directives to promote inflated numbers.

The PCR tests have false positives. The numbers derived from these tests are estimates at someone actually being infected or not. Not the 100% reality. If the tests says positive, then it’s a “confirmed” positive case, even though the person might not have alleged COVID-19. This has been shown to happen in people getting tested.

Plus the number of cases are inflated from testing centers not actually testing people, yet reporting them as infected for the data collectors of the state. Then when this gets exposed by local news stations, you don’t see USA Today going around saying “ha, all the claims of cases of COVID-19 are false information or fake news!”. No. They only do that to information that doesn’t support the official narrative lie.

Everything has been an estimate with the data collection. It’s not 100% a correlation to the actual reality. Even worse, the authorities and news used bad estimates early on when there was hardly any data to justify the edicts being put forth to control people.

All of that was fine though. Using less data to justify bad decisions is fine. Now that there is more data, and the CDC comes out with an infection fatality rate in line with a severe flu season, these Ministry of Truth fact checkers what to say the 0.26% number is only an estimate, not a confirmation of the actual IFR. Therefore, false claim, false information, fake news.