There is a political divide that many see (or adopt) when looking at who accepts and who doesn’t accept the governments ‘measures’ (edicts) about the novel coronavirus SARS-CoV-2. The assumption is that if you are for them then you’re on the left, and if you are against them then you are on the right. But that’s not true for everyone. 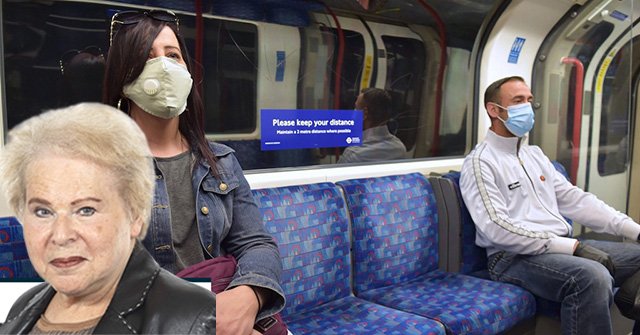 Janet Daley is a writer for The Telegraph in the UK. She is a leftist, as her description states:

Janet Daley was born in America, and taught philosophy before beginning her political life on the Left (before moving to Britain, and the Right, in 1965) – all factors that inform her incisive writing on policy and politicians.

But she isn’t in support of the government’s actions to control the population for the alleged goal of protecting one portion of the populace. As if this portion of the populace aren’t capable of taking actions themselves to mitigate their risk if they are that afraid of the coronavirus. I speak of the elderly, which Janet is herself 76 years old.

In a piece written in early June titled

As she notes, those who lives through wars are “infuriated” by analogies to the pandemic being akin to wars. People aren’t being bombed, killed or buildings destroyed. They had it far worse, with real food shortages. That’s not to say food shortages won’t be coming our way if things continue as they are.

But even in the wartimes, with bombs dropping, at least they were able to hug and embrace others without the government trying to arrest or fine them. They huddled, had sex, formed new relationships and shared drinks.

What we now see is an “unprecedented social experiment.”

In effect, the government is coercing an entire population into behaving in ways that were once manifested only by people with pathological conditions like agoraphobia or extreme anxiety about personal contact. It is quite remarkable how little general discussion there has been of this.

And she is right. The media projects a one-sided argument in favor of accepting what the government says, and complying with it. If you speak out or don’t obey, social consequences from your peers are sure to follow. Everyone is encouraged to be a snitch and report on non-conformists to the new “rules” (dictates).

These rules are being forced on people “in the name of that small proportion of people who are known to be, in truth, the only ones in real danger from the virus.” If you don’t accept the dictates and comply, you are seen as foolish/stupid, or heartless and only care about money over saving lives.

Janet rejects this false dichotomy of compliance. As she notes, the deceptive arguments mean nothing:

The pollsters’ question – do you support these repressive laws or would you rather just let people die? – can only be answered in one way. It means next to nothing.

Janet has a message the rest of society should listen to:

So as someone who just about counts, because of my age, as one of those being protected by everybody else’s sacrifices, I assume the moral right to say this: please don’t. Don’t give up the freedoms and the opportunities that are proper to your stage of life for my sake and do not go meekly into that imprisonment to which the government has sentenced you. Since age is the main issue here, surely those in the relevant category count as grown-ups?

Most younger people have functional immune systems, and have very little risk of dying. They can live their lives. They can work. They can interact with other sectors of society and spur economic transactions.

Let the elderly be informed. Let them make their own decisions. Give them data. Data about the numbers and how lethal it actually is. In the US, people have a 99.74 survival rate. Offer them immune boosting nutrients to help counter act any possible infection. Stop putting them in fear and making them feel utterly helpless.

The whole response has seemingly been engineered to help the elderly succumb to infections, rather than help them right it off successfully. I have written about the travesty of suppressing HCQ treatments and other information like nutrients to reduce severity and duration of the infection. I have also written about the failure to actually protect the elderly in nursing homes, which account for over 82% of the death in Canada, and 33% in the US.

Janet also speaks of the perpetual social distancing until a vaccine, maybe there will never be a vaccine, oh watch out the second wave is coming in the fall, winter, next year, etc. She asks:

When – and on what grounds – do we decide that this is over? Or is that logically impossible? Must it be decided simply by popular resistance and a gradual collapse of government authority?

Maybe that is what it will take. Mass protests to get the government boot off our faces. Until then, most people will stay in fear and obey what their told to do.