CDC States COVID Mortality at ‘Epidemic Threshold’, Is It the End?

The CDC says the data for COVID-19 mortality is on the cup of cutting off what’s needed to call COVID-19 an epidemic. With it’s policies to diagnose probable or assumed COVID-19 presence in patients as “dying from COVID-19”, it still comes up with some revealing statements.

As more testing has been done and continues to be done, detection of COVID-19 cases is rising with it. Or alleged cases since the PCR test is known to product false positives and negatives. But the increased cases only helped to lower the infection fatality rate for COVID-19. Especially since deaths have fallen 80-90% recently compared to the highs in April. 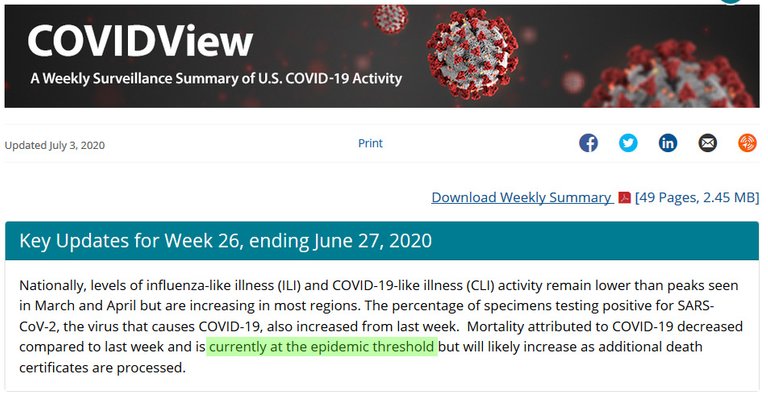 The death rates now are so low, that a weekly “Key Updates”

Nationally, levels of influenza-like illness (ILI) and COVID-19-like illness (CLI) activity remain lower than peaks seen in March and April but are increasing in most regions. The percentage of specimens testing positive for SARS-CoV-2, the virus that causes COVID-19, also increased from last week. Mortality attributed to COVID-19 decreased compared to last week and is currently at the epidemic threshold but will likely increase as additional death certificates are processed.

The downplay the epidemic nearing it’s end, they are sure that death number will spike up to keep it above the epidemic threshold. Just what’s need to support the experts and media narrative of a so-called “second wave”.

All the media can do is report on cases now, since death keep falling. That’s all they have to spark the fear in the masses to obey and justify more authoritarian measures being imposed on people.

Don’t worry they said, these measures are just temporary. We don’t have the data, it’s just a precaution. Then when real data came in, they just kept the measures in place. Then when more data came in, like less deaths but more cases (which doesn’t matter since it’s just cases of people getting something and not dying), they decided to bring back the measures they had removed a few weeks ago. The data doesn’t matter. They ignore it.

New China Virus Cases up (because of massive testing), deaths are down, “low and steady”. The Fake News Media should report this and also, that new job numbers are setting records!

Yeah those fake job numbers don’t mean shit, like how more jobs were created when people were forced out of work. Manipulated math that contradicts reality. Anyways, he’s got it right about the cases up and deaths down. Yet the media keep parading case numbers as if that means anything about the lethality of the virus.

It’s been about two weeks they have been freaking out over more cases being reported due to more testing. Which is just what makes sense when you test more. But have deaths started to climb again in correlation with the rise in cases? No. They are running on fumes to stoke the flames of fear.