Biosecurity and Authoritarian Control, the ‘War on COVID’ is a War on People

When thinking of a world war, the obvious reference and imagery is of WWI and WWII. Soldiers were in trenches ready to swarm onto the filed in WWI. Then planes and tanks roamed the battlefield with submarines in the sea. Modern warfare has moved from soldiers to drones and aerial assaults. With computing, there is cyber warfare. But there is always the mind-centric psychological and information warfare that are crucial to manipulating people in covert warfare. 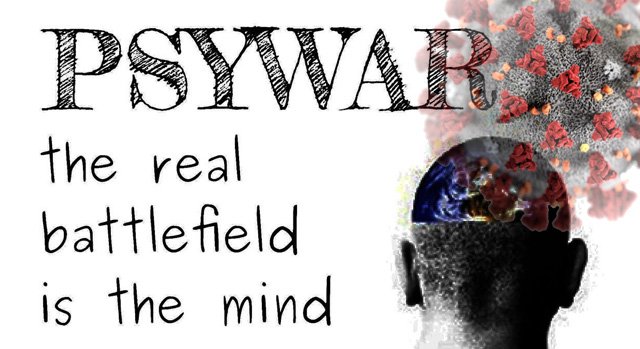 We still have outward enemies pointed at for the authoritarian government to justify their continued building of the war machine. But the controllers have moved inward to establish dominance on their own populations. China is a prime example for others to emulate.

Nations have declared war inside themselves, as troops are on the streets, panic is engineered. Martial law has ensued as people are told to stay in their homes (or else). And they blame a virus (or an outward source like China) as the enemy rather than themselves as the executors of the psychological and societal shift. Authoritarians are the wagers of a covert war on their own people.

It might progress externally to an orchestrated battle of the US and Western allies against Communist China and it’s allies. Just as engineered as the Cold War who had the US funding the Soviets for decades, but with real lives lost for the dark powers to keep people serving, dying for them, and enriching them via the war machine.

While the West publicly condemns Chinas authoritarian model for controlling it’s society, it expects people to support it’s adoption of the Chinese model for societal control. This is evident with the manufactured crisis of COVID-19. Lockdowns, forced unemployment, and technological surveillance has risen. While some see it for what it is, others accept and even embrace their imprisonment as security and safety.

The police state is growing globally. “China bad” when they do it, but “it’s good” when it happens here. People don’t recognize the start of WWIII being waged on thems by their governments. The outward enemy is only a bogeyman to justify authoritarian measures to the inward enemy that the people have been covertly declared to be.

Cyber warfare, psychological warfare, and information warfare is underway within Western nations to stop alleged “disinformation” and “conspiracy theories” that counteract the official narrative propaganda. This narrative must be repeated and become ingrained as the only “reality”. Cutting off access to contradictory information is necessary to sustain and strengthen the illusion people are expected to buy into. The media and big tech giants are promoting the false narrative and suppressing or subverting information that contradicts it.

As much as the two-party paradigm is a fraud to keep people going in circles and never escaping their enslavement, the Democratic party has been the biggest pusher of fraud in the political process. The left-leaning press and academia aids the agenda to destabilize society (not that the right is a beacon of light). Denial of rights and freedom was pressed in support of lockdowns against the non-crisis of COVID-19. When that fable was waning, they rushed to support a race war, communists and fascists who pretend to be anti-fascist.

We are the enemy of the controllers and authoritarians, and they need us distracted from seeing what’s going on. Divide and conquer. Biosecurity is the new political avenue for imposing greater authoritarian control on society, which the engineered crisis of COVID-19 has propelled forward at warp speed.

A great explanation of this is written by Giorgio Agamben in Biosecurity and Politics (translated from the Italian original). Medical or health security has become the essential means to defend against a perceived “medical-” or “health-terror” as a means to govern. “Worst case scenarios” have been propelled to the forefront of policy to justify authoritarianism.

Even back in 2005, in line with this kind of “worst case” logic, the World Health Organization warned that “avian influenza would kill 2 to 150 million people,” pushing for political responses that nations were not yet prepared to accept at that time.

These imagined and engineered “extreme situations” gave political justification for enforcing changes in government policies towards their own people. Rather than chosing hwo to mange your health safety, “health is imposed on them as a legal obligation (biosecurity).”

Zylberman described the political recommendations as having three basic characteristics: 1) measures were formulated based on possible risk in a hypothetical scenario, with data presented to promote behavior permitting management of an extreme situation; 2) “worst case” logic was adopted as a key element of political rationality; 3) a systematic organization of the entire body of citizens was required to reinforce adhesion to the institutions of government as much as possible. The intended result was a sort of super civic spirit, with imposed obligations presented as demonstrations of altruism. Under such control, citizens no longer have a right to health safety; instead, health is imposed on them as a legal obligation (biosecurity).

This was described in 2013. The pattern was present, and has continued to emerge for those with eyes to see. Tracking, tracing, testing, heat sensors, cough detection, drones, immunity passports, etc. People have been manipulated/convinced to accept things they previously never would have, by creating a fear-hype panic and hysteria that has them abandon freedom for illusory safety.

It is evident that over and above any emergency connected with a certain virus that could in future make way for another, the design of a new paradigm of government is discernible; one far more effective than any other form of government that the political history of the west has known before.

Due to the progressive decline of ideologies and political convictions, the pretext of security had already succeeded in getting citizens to accept restrictions to their freedom that previously they were unwilling to embrace. Now, biosecurity has taken things further still, managing to portray the total cessation of every form of political activity and social relationship as the ultimate act of civic participation. We have witnessed the paradox of left-wing organizations, traditionally known for demanding and asserting rights and denouncing constitutional violations, unreservedly accepting restrictions to freedom decided by ministerial decrees, devoid of any legality. Even the pre-war fascist government would not have dreamed of imposing such restrictions.

The entire concept of human destiny is at stake and we face a future that is tinged with a sense of apocalypse, of the end of the world—an idea adopted from our old religions, now nearing their twilight. Just as politics was superseded by the economy, now the economy too will have to be integrated into the paradigm of biosecurity, for the purpose of enabling government. All other needs must be sacrificed. At this point it is legitimate to ask ourselves whether such a society can still be defined as human, or whether the loss of physical contact, of facial expressions, of friendships, of love can ever be worth an abstract and presumably spurious medical security.

This is horrifically what is happening. The emergence of biosecurity is the “solution” to impose greater control on us as the authoritarian’s enemy. People need to wake up to this. The war on COVID is a war on us, on our minds and on our freedom. Dig into the COVID scamdemic deception if you don’t yet see it. People are dying who could have been saved with known information that has been suppressed. People have been intentionally killed to increase the death toll. And still it only reaches the level of a sever flu season.

I have to give them credit for the masterful deception. It’s incredible, but it’s happening. The media and “experts” message is repeated and becomes inculcated into the minds of the masses. They manufactured an unreality into the reality we are living.